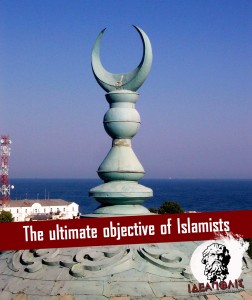 In recent months, terrorist and criminal attacks have been launched by Islamists within many European states. As a consequence, many people — mainly white, non-Muslim Europeans — have been killed or injured in the heart of Europe. Nevertheless, the primary purpose of such attacks is not simply to kill Europeans, but to change the thoughts and behaviors of those who survive. Furthermore, if the number of attacks becomes markedly higher, European nations will be awakened and react against the Islamic threat in order to survive.

Most mainstream analysts claim Islamic violence is an effort to terrorize Europeans in order to influence their policies in the Muslim world. But this analysis is not sufficient and does not reveal the ultimate aim of the Islamists. The explanation of their behavior lies in the Islamic theology and is revealed by their modus operandi during the attacks.

In fact, all Muslims, and not just the Islamists, have the “divine” duty to bring all of us to their brotherhood, the so-called Islamic Ummah. In order to achieve that, they are ordered by their God to use any means including raw force. When raw force is not an alternative, Muslims try to peacefully convince the “infidels” to convert to Islam or use covert pressure and camouflaged force.

Generally, in order to convert more easily to another religion, one should first lose a spiritual connection to one’s own nation, religion, customs, civilization — in other words, one’s identity. This is the exact aim of the recent attacks in Europe, either by the so-called “lone wolves” or by organized Islamic terrorist groups. The real target of the Islamists is the European identity. They try to prevent or hamper Europeans from expressing their identity by participating in national and religious (non-Islamic) celebrations and generally by living according to traditional or modern European norms and ways of life, which are totally incompatible with the way of life imposed by the Quran. Losing the European identity would facilitate the future conversion of Europeans to Islam.

In conclusion, it is not a coincidence that the aforementioned attacks had a common — though covert — target, which is the European identity. Islamists will continue launching small or wide scale attacks against every symbol of European identity, material or spiritual. In addition to killing and raping infidels, Islamists will target cultural monuments, works of art, religious ceremonies, public celebrations, and any other activity which promotes the European identity and constitutes an obstacle to their domination over Europe.

Taking this analysis into consideration, the European countries’ intelligence and security services should start reassessing their security plans for cultural monuments and gatherings, especially during public celebrations such as Mardi Gras and Halloween.

In any case, whether European governments decide to take effective action against Muslim terrorists or not, we the Europeans must safeguard our identity and reject both Islamic obscurantism and the fake idea of multiculturalism.