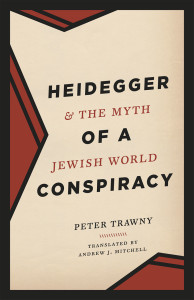 Peter Trawny (b. 1964) is professor of philosophy and the founder and director of the Martin Heidegger Institute at the University of Wuppertal, Germany. He is also the editor of eight volumes and counting of Heidegger’s Complete Edition, including the first four volumes of the Black Notebooks, which began to appear in March of 2014.

For a period of 40 years, Heidegger committed his most personal philosophical reflections to a series of black oilcloth notebooks, which means that Heidegger’s philosophical life is surely the best-documented of any great thinker. Judging from the first four volumes, these notebooks are a philosophical treasure trove that will be read and analyzed for centuries to come.

But all this has been eclipsed because among the 1,700+ pages of the Black Notebooks published so far, there are a few not entirely flattering remarks about Americans. Just kidding. Heidegger’s anti-American remarks would never be controversial, not even in the “American” press. The controversy is over Heidegger’s remarks about Jews. I have translated the most controversial ones from the third volume here [5]. Richard Polt has translated all the remarks from the first four volumes here [6].

It has never been a secret that Martin Heidegger was a National Socialist who joined the party in 1933 and remained a member until 1945. Heidegger was never an orthodox National Socialist, but he had high hopes for the movement. It was also no secret to Heidegger’s colleagues and students, including the Jewish ones, that he had anti-Semitic convictions. But these somehow did not prevent him from cheating on his German wife with a Jewish student, Hannah Arendt.

Furthermore, after the War, Heidegger had ample opportunity to adopt the victors’ line: to accept Germany’s sole responsibility for the war and to put the suffering of Jews front and center. But he refused. Heidegger did not see the Germans as simple aggressors and the Jews as simple victims, but saw both peoples as caught up in destructive historical forces that they could not control. It is particularly galling to critics that although Heidegger chose to “remain silent about the Holocaust,” he did see fit in 1953 to publish his remarks on “the inner truth and greatness of National Socialism [7]” in his 1935 lecture course Introduction to Metaphysics.

Heidegger’s Nazism and anti-Semitism may not be news, but every few years, as new facts emerge and texts are published, the Heidegger scandal is pumped back up in academia and the press. The motive is fairly transparent. Despite his Right-wing politics, Heidegger is one of the master thinkers of the postmodern academic Left. Heidegger-the-Nazi is a club wielded against postmodernism by partisans of modernity, whether they be orthodox Marxists, liberals, or neoconservatives.

The two books under review were occasioned by the latest scandal regarding the Black Notebooks. And who is better qualified to comment on them than Peter Trawny, who is editing and transcribing them for publication? Although Trawny triangulates against both “orthodox” Heideggerians and Heidegger’s critics, these volumes are transparent attempts at apologetics and damage control. Both volumes, however, strike me as muddled, inept, and unconvincing.

Both books are written in the standard pretentious, obscure, and rhapsodic style that is the bane of Heidegger scholarship. Heidegger and the Myth of a Jewish World Conspiracy is at least divided into short, digestible chapters. But Freedom to Fail is a sprawling essay, full of asides, blind alleys, free association, and leaps of logic and narrative — a labyrinth in which one only occasionally picks up the thread of an argument.

In Heidegger and the Myth of a Jewish World Conspiracy, Trawny makes a completely unwarranted claim that Heidegger was influenced by the Protocols of the Elders of Zion, apparently because some of Heidegger’s remarks resemble views found in the Protocols. But the Protocols simply restate widespread anti-Semitic views which Heidegger could have heard anywhere, so any resemblances prove nothing.

Beyond that, Heidegger’s whole anti-humanist approach to history fundamentally contradicts the conspiratorial view set forth in the Protocols, which are tendentiously called a “forgery” but are merely a literary representation of the guiding principles of a Jewish conspiracy to attain world domination. The authors of the Protocols observed Jewish behavior, deduced the principles that lay behind them, and then represented them as all part of conscious plan that is being put into practice.

Heidegger had no doubt that Jews played prominent roles in Bolshevism and capitalism, both of them calculating and deracinating forms of materialism. Nor did Heidegger deny that there are cabals of “planetary criminals.” But Heidegger did not think that historical trends are ultimately conditioned by human thought. Instead, he thinks that human thought is ultimately conditioned by historical trends. He believed that both capitalism and communism were manifestations of wider historical forces of modernization (which he calls “machination” in the Black Notebooks).

Heidegger evidently thought that Jews, because of their rootlessness and penchant for calculation and manipulation, were ideally suited to rise to the leadership stratum of modernizing societies and forward modernity’s drive to create a homogeneous global materialist order. In a passage dropped from the published version of Heidegger’s History of Beyng (1938-40), Heidegger notes, “One would have to ask in what the peculiar predetermination of Jewry for planetary criminality is grounded.” That question remains valid today as the Muslim world burns and bleeds, and Europe is invaded, due to the machinations of “neoconservatives [8].”

Heidegger at first thought that National Socialism was an alternative to machination, but he came to believe that it too was caught up in the same spirit.

Heidegger and the Myth of a Jewish World Conspiracy, like most Heidegger secondary literature, is interesting only for quoting passages from Heidegger’s untranslated and sometimes unpublished writings. It is pretty much useless as an analysis, since analysis is not the strong suit of the whole genre, and Trawny’s apologetic project basically consists in suggesting a wide range of different meanings — many of them patently implausible — for each passage, until Heidegger recedes entirely behind a verbal haze. To lull his academic audience into dropping their guard, he speaks of Heidegger’s thought being “contaminated” with anti-Semitism and piously genuflects before the “Shoah.” It is all very tiresome, like reading boilerplate press releases from the Anti-Defamation League. [9]Freedom to Fail actually has a discernible argument, although it is hidden in a great deal of clutter. If I were Trawny’s editor, I would have cut two-thirds of the text and demanded at least three rewrites. Basically, it would have ended up as a journal article, not a little book. As I read it, Freedom to Fail is a plea against political correctness. It is a plea for absolute freedom of thought. It is a plea for taking risks, for striking down unknown paths, for intellectual adventure — with no fear of the consequences.

Trawny argues that Heidegger’s thought should not be subjected to moral judgment because by its very nature it lies beyond the distinction between good and evil. Heidegger believes that all standards of right and wrong are established by a contingent, inscrutable, and enthralling historical process he calls the “event” (Ereignis). The Ereignis lies beyond good and evil, and Heidegger’s thought, which seeks to understand the event, is beyond good and evil as well. One could also make the same argument about reason: that which sets up our standards of reason is beyond reason.

Trawny also argues that we should not count Heidegger’s “errors” against him, because erring is intrinsic to philosophy as Heidegger understands it. This argument strikes me as an equivocation, since Heidegger makes a distinction between ordinary truth and error (which would apply to statements about Jews, for example) and truth and error in a more fundamental sense. Before we can see whether our beliefs correspond with facts, the world has to be present. But Heidegger believes that the world is not just present to our senses. It is also rendered meaningful by our largely unconscious participation in a culture. This meaningful disclosure of the world is truth in a more fundamental sense. But this disclosure is always finite. It opens up one world of meaning while closing off, concealing, and sheltering other possible worlds of meaning. This is error in a more fundamental sense. Heidegger’s task is to think the Ereignis that both opens up and conceals worlds of meaning. Thus error is as much a part of Heidegger’s ultimate quest as truth. But this would hardly excuse an overdraft at the bank.

It is ironic that Trawny argues for thinking dangerously while treating anti-Semitism and National Socialism as self-evident “errors.” But Trawny and his audience are college professors, who work in the most intellectually repressive sector of our culture. Reading Trawny sometimes brings to mind the unattractive image of a worm squirming on a hook. The hook is political correctness. You can squirm all you want, trying to get comfortable on it. But the only solution is to get off the hook entirely. Still, by the standards of academia today, even squirming is heroic. In its aim, at least, Freedom to Fail has to be counted a work of courage.

Of course Trawny’s argument leaves me completely cold, because on these matters at least, I think Heidegger did nothing wrong. Heidegger’s initial hope that National Socialism would inaugurate a new epoch in world history was naïve enthusiasm, but I can’t blame he for choosing Hitler over the Communists or their ineffectual bourgeois opponents. Heidegger obviously thought that his support for National Socialism was not a shallow fancy, but something that deeply implicated himself and his philosophy, which is why his subsequent disillusionment led him to conscientiously rethink some of his fundamental philosophical positions. Finally, the general thrust of Heidegger’s remarks on the Jewish question is to criticize the paranoid conspiratorial view of history put forth in the Protocols.

My prediction is that this latest contrived Heidegger controversy will die down as scholars dig into the Black Notebooks and begin to appreciate the thousands of pages that don’t mention Jews. Indeed, this controversy might actually work to Heidegger’s advantage, since it has already made the Black Notebooks philosophical bestsellers in Germany, encouraged intensive reading and scholarship, and put translations into several languages on the fast track.

My thesis is that the outline of a post-totalitarian, postmodernist New Right first emerges in these diaries of a dissident National Socialist [10].