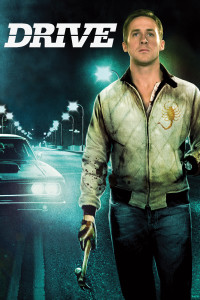 , the 2011 award-winning art-house crime thriller, is a modern retelling of the story of the knight in shining armor who saves a damsel in distress from the clutches of evil. Being modern, however, this is not a fairy tale that ends with “. . . happily ever after,” for the modern world cannot offer happiness for the heroic.

The film opens with a handsome young Nordic man (Ryan Gosling) driving through the dark streets of Los Angeles, alone in his 1973 Chevy Malibu. The Driver is never named. He is a silent loner in the tradition of the Man with No Name. A Hollywood stunt driver by day, he is a calculating getaway driver by night. His rules are simple: he will wait for five minutes. If you show up during that window, he will drive. He won’t wait any longer. He won’t assist you. He drives. That’s it.

Early in the film the Driver meets the young, white, seemingly single mother Irene (Carey Mulligan), who lives in the same apartment building as the Driver with her mixed-race son Benicio (who’s half Hispanic). There is a mutual attraction, and a relationship begins to bud. This ends, however, when Irene reveals her husband Standard (Oscar Isaac) is getting out of prison soon, and for the sake of her son, she has chosen to stay with her husband.

Despite being friend-zoned, all goes well for the Driver until a Jewish mobster, Izzy (Ron Perlman), who goes by the name of Nino to sound Italian, blackmails Standard to rob a pawn shop for him as payback for prison protection. The Driver, who would otherwise let a prison rat like Standard go through with the heist alone, decides to drive for Standard, for the sake of Irene and Benicio.

As is mandatory in such films, the heist goes awry. Standard is killed by the pawn shop owner, and the Driver is left in possession of $1 million in stolen money. Izzy calls on his fellow Jewish mobster, Bernie Rose (Albert Brooks), to clean up the mess. The Driver must die, because he has the money and because he can tie the robbery to Izzy.

By breaking his rigid rules out of altruism, the Driver is thrust into a world of needless chaos and killing. Such actions are reminiscent of modern-day liberals, who, out of altruism towards outsiders, have opened Pandora’s box, destroying their formerly successful societies. Throughout the film the Driver dons, like a suit of armor, a retro silver bomber jacket with a large golden scorpion embroidered on the back. This symbol hearkens back to an old fable:

A scorpion asks a frog to carry it across a river. The frog hesitates, afraid of being stung, but the scorpion argues that if it did so, they would both drown. Considering this, the frog agrees, but midway across the river the scorpion does indeed sting the frog, dooming them both. When the frog asks the scorpion why, the scorpion replies that it was in its nature to do so.[1]

Like the frog, the Driver’s well-intentioned sensibilities are used against him by less virtuous creatures. His decision to ignore established well-reasoned rules for the sake of keeping together a family results in his almost perfect world crumbling apart.

Then the Driver meets with Bernie, who offers him a deal: return the money and Irene and Benecio will be safe. The Driver, however, will have to spend the rest of his life looking over his shoulder. Minutes later, as the Driver pulls out the bag of money from his trunk, Bernie stabs him from behind. The Driver, however, is wise to the mobster’s propensity for betrayal and stabs him in the throat, killing him. Like many European men today and throughout history, it is only after he is wounded that he is ready to fight and win.

This confrontation recalls the stab-in-the-back of post-WWI Germany. Germany did not lose the Great War but rather was betrayed by disillusioned citizens led astray by Jewish anti-German propaganda. More important than historical circumstances, however, is the origin of this myth. The “stab-in-the-back” is a reference to the ancient Germanic myth of Siegfried, the quintessential hero of Germanic society, who is literally stabbed in the back by the half-dwarf Hagen (the dwarves, as depicted in Wagner’s Ring, being symbolic of Jews).[2]

The Driver is an archetypal Siegfriedian hero. He is a man without fear, a man who keeps his cool under pressure. He gallantly defends the weak. He is a “real hero,” as the song at the end of the film suggests. But the Driver lacks Siegfried’s innocence. He is, after all, a criminal. Both are literally stabbed in the back by dwarven foes. But, unlike Siegfried, the Driver saw it coming and survived – whereas the dwarves did not. Like Siegfried, the Driver is capable of great physical violence. But his innocence is wedded with cunning, which saves him in the end.

The Driver’s world in L.A. is incompatible with the honor code of a real hero. It plays by different rules. The Driver could have let Standard go alone, assuming he would either die or face imprisonment again, therefore allowing the Driver to once again pursue a relationship with Irene. But this doesn’t even cross his mind, because he is incapable of harboring deceit. The Driver, like honorable whites today, exists in a world that exploits his values at his expense–ultimately threatening his very existence. The Driver is seen as just another animal to be used and discarded by the kosher powers that be. In the name of honesty and family he allows his woman to leave him, ending his chance to pass on his blood. In the modern world his values are inverted.

Irene, whom the Driver saves at one point by kicking in the head of a hitman sent to kill her, responds with terror. Her knight in shining armor has turned out to be a violent savage according to her warped, modernized mind. She doesn’t respond by giving her dragon slayer a kiss, but stares in absolute fear of him. Does this event not illustrate the current predicament of the heroically-minded white man today, whose women are taught to berate him as a sexist, reactionary Neanderthal, despite his efforts to do what his instincts tell him, namely to protect them from evildoers who would defile and destroy them?

It is no wonder the Driver has been living a life of isolation. How many young single men reading this review can relate to him as they’re forced to find camaraderie among a bunch of fellow nameless and faceless bloggers. I, for one, have lost valued relationships for my embrace of traditional gender roles and rejection of today’s standards of “polite society.” Many men choose — wrongly, in my opinion — to “Go Their Own Way.”

The film ends as it started – with the Driver, having survived a near-fatal knife attack, driving alone into the night. This time, however, he is driving away from the corrupt world of crime and chaos, leaving behind the stolen money, Bernie Rose’s corpse, and, therefore, any breadcrumbs connecting the whole affair to him.

Unlike the Driver, we can never really walk away from the hostile anti-culture we currently inhabit. We will always be looking over our shoulders unless we face and slay our dragons and dwarves. Going our own way is not enough. A real hero does not merely walk away from a fight and say “fuck it” (or, in the case of MGTOW, “don’t fuck it”). He walks away when his quest is finished.