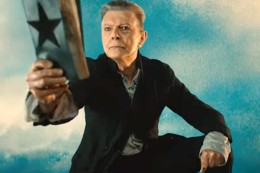 Blackstar will inevitably serve as Bowie’s last will and testament whether he meant it to or not. Certainly the writing of much of the material would have preceded his awareness of his terminal illness and his confrontation with imminent death. But the genuinely somber tone to much of Blackstar suggests that he might, if things had turned out differently, have been entering into a new and deeply serious vein of creativity. It’s anyone’s guess how much this album was influenced by his own illness but, like Johnny Cash’s American IV: The Man Comes Around, it already seems to have taken on the air of a legendary final album.

Two questions: should Bowie be regarded in such high esteem? and is Blackstar an appropriate epitaph? Two answers: yes and yes.

Firstly, to deal with Bowie’s place in popular culture. It’s probably fair to say that a type of new culture emerged from 1945 onwards. This culture was one that was dominated by America’s post-war hegemony and was characterized by the globalizing of American products and by a severance with traditional cultural taboos. It really became dominant in the 1960s and then augmented and extended its influence through the ’70s and into Reagan’s ’80s with the rise of MTV and home video. Bowie’s songs from Space Oddity through to Ashes to Ashes span the 1970s and are some of the most important of that decade. For anyone growing up at that time they obviously hold a particular sentimental attachment, but there is also more to it than that. The 1970s were the last decade when it really seemed that cultural progress (and therefore optimism) was still possible. Since then, the expansion of technology into every area of life and the perpetual recycling of cultural forms has given everyone a sham sense of progress. We are bombarded as never before with new versions, new upgrades and new remakes of everything from phones to films but the process is inflationary so that there is no real growth, no real progress, just diminishing increments writ large. Bowie’s ’70s songs occupy a space before this process really took off and where the final triumph of the American hegemony was not yet certain. I think that this gives them a special sort of nostalgic value that is to do with a cultural childhood’s end. Hunky Dory, Ziggy Stardust, and Low all seem to belong to a half-remembered era when what was artistically possible hadn’t yet been pre-determined. Bowie was the greatest exponent of a cultural optimism that looked forward to a future that was going to be better than the present. With regards to Blackstar itself, what can be said with some certainty is that it is amongst the best of Bowie’s albums despite being quite different in character to his earlier work. Hindsight now allows us to see it as a summation of his varied musical roles but it should more accurately be seen as an integration of various aspects of his life into an attempt to achieve some wholeness, some higher principle, despite the fact that he recognizes this as ultimately unachievable.

The title track was released a few weeks before his death with a remarkable video. The song “Blackstar” with its refrain, “In the center of it all,” is clearly at some level an attempt to apprehend a fixed, centering principle, an objective locus that could provide a point of stillness beyond the shifting tides of personality, or in Bowie’s case, beyond his many personas. The black star is the central point of a galaxy, the collapsed star that forms a black hole. An entire galaxy will rotate around this hub, a dead star, which itself remains fixed and hidden. The black star itself is mysterious; nothing can cross its event horizon and return to tell the tale. It propels planets and suns through cold space but remains concealed, occult. In the video, the skeletal corpse of an astronaut appears to become the focus for a strange cult whose members enter into ritualistic seizures in the presence of his jewelled skull. All of this suggests a Lovecraftian-style interest in the notion of lost civilisations and ancient gods. None of it is especially straightforward to interpret, but the shot of the astronaut drifting off in space towards a black hole does seem like a stark image of the inevitable pull of mortality and the impossibility of ever returning. The spaceman is already dead, his corpse drifts towards its final disappearance, yet some cultic worshipers still attempt to commune in some way with his residual presence. Perhaps something does endure after all, something creative and numinous.

Musically, it’s a song of two acts. In the first, whilst Bowie plaintively sings of “a solitary candle” at the center of everything, a drum and bass backing seems to undercut the search for quiet unity. It’s as if Bowie is consciously seeking something above the restive noise of popular culture. In the second part the music becomes more melodic and better suited to the more human sounding singing. “Something happened on the day he died/Spirit rose a meter and stepped aside/Somebody else took his place and bravely cried/ (I’m a blackstar, I’m a blackstar).” Someone dies and someone else fills the vacuum. After the seeking towards a transcendent moment of unity there is an acceptance that the wheel of life continues on relentlessly.

The following single to be released from the album, “Lazarus,” has a different feel. It’s a calmer affair, suggestive of some of the more meditative moments of Talking Heads or Joy Division (think of “The Overload” or “The Eternal”). The video was released on the same day as the album and shows a blindfolded Bowie on his deathbed whilst a more energetic alter ego engages in gestures of creativity, striking dance poses and ostentatiously scribbling down ideas as they come to him. It’s difficult not to read this as Bowie at the end of his life looking back on his career as an artist, seeing it as somehow silly yet hyperactively fertile. Much has been made of the lyrical content of this song, and it really does provoke an eerie chill to see Bowie in a hospital bed singing, “Look up here, I’m in heaven,” liver spots clearly visible on his hands. The subject of Lazarus obviously suggests a man who is thinking about his own terminal illness and the possibility of what, if anything, might lie behind the event horizon of death. Musically, it flirts with the funereal but achieves a triumphant melodic resolution that perhaps expresses the idea that art is the truly transcendent victory; the ultimate defeat of mortality.

Elsewhere, “‘Tis a Pity She Was a Whore” and “Sue (Or in a Season of Crime)” both place avant-garde jazz meanderings onto drum and bass beats in ways that work surprisingly well. Bowie manages to fit his vocal melodies into this mix rather seamlessly. “Girl Loves Me,” a tale of sex and drugs told in a mix of palare [4] and Nadsat [5] (from Anthony Burgess’ A Clockwork Orange) and told over a trip hop soundtrack, seems to be a sort of regretful, sardonic memory of time wasted when wasted: “Where the fuck did Monday go?” But there is no sentimentalism here. In “Dollar Days” there is a similar avoidance of kitsch: “If I’ll never see the English evergreens I’m running to/ It’s nothing to me/It’s nothing to see.”

Blackstar is a very apt album for Bowie to bow out with precisely because it’s surprising and atypical. There is a seriousness of intent and a brutal precision to the lyrics that is only highlighted by the distinctly unpop sensibility of the music. Bowie’s place in pop history is indisputable, but Blackstar reminds us that he was always using the pop form to seek a genuinely artistic mode of expression. All of his many masks were part of a quest to discover . . . well, what?

Bowie is often thought of as a postmodern artist because he switched styles and images quite readily. But I think that he was more of a modernist because his intent was always to search for something that belongs to the future. The postmodern is essentially atemporal, simply recycling forms from other cultures and other times. But the modernist is focussed on the future and its actual possibilities. Bowie’s varied artistic pursuits and the extremity of some of his experiences seem to have been a way of breaking through the mundanity of the Britain he was born into. Like Burroughs with his cut-up technique, he wanted to cut into the present so that the future leaks out. Blackstar now represents the ultimate limit of Bowie’s future, but his legacy should be seen as one of healthy optimism. With Blackstar he has left us with a work that still seeks new modes of expression, that still wants to discover more, but that ultimately accepts the inevitability of death.