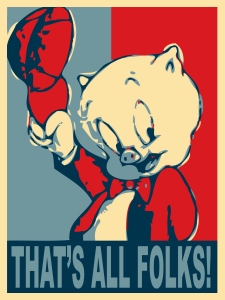 [1]An incident described as “Islamophobic” and “hate motivated” has cropped up in the national news this week. The Washington Post reports [2] that, on Monday night, a severed pig’s head was thrown at a mosque doorstep in Philadelphia. Police are investigating the incident as a possible hate crime. The specific crime is somewhat unclear, but Rue Landau, executive director of the Philadelphia Commission on Human Relations says the act may be in violation of the city’s ordinance on ethnic intimidation and institutional vandalism, considering that Muslims are notoriously adverse to pork. In any case, police will be monitoring the mosque more closely [mission accomplished?] because, as officer Pete Berndlmaier noted, the perpetrators might “up the ante.”

This use of pork in a threatening manner comes at a perfect time for Muslims, who have been under scrutiny around the world for several recent atrocities committed in the name of Islam. As has been the case for some time, many people in non-Muslim countries feel somewhat uneasy about massive numbers of Muslims moving into their cities and towns. Many non-Muslims have heard about what life is like in Muslim countries and they don’t want their own countries to be like this. And with the recent acts of terror committed by Muslims on both the North American and European continents, the cry to reject Muslim immigration has been raised with greater furor than ever.

Luckily, for Muslims, this pig-headed vandalism has come along and can be used to berate anyone opposed to further immigration of Muslims as “hateful” and it provides much needed evidence that Islamophobia is on the rise. Unlike the terrorist attacks committed by Muslims, nobody died. But the theory seems be that somebody might die unless this nasty nationwide trend of anti-Islamic rhetoric is curbed. Since, the Washington Post and numerous other national media outlets are trying draw our attention away from threatening behavior that actually kills, to behavior that is mildly offensive, let us take the bait. Let us assume the pig head incident was not a hoax perpetrated by Muslims in order to elevate their victim status. Rather, let’s assume that there is a very real and rising Islamophobic threat.

In this time of terror and tension between groups with diametrically opposed value systems who are forced together by a globalist system that wants them to abandon their values and become better consumers of globalist products and services, it’s important for Muslims to remember that not all non-Muslims are violent. The vast majority of non-Muslims are, in fact, peaceful. Most non-Muslims just want to live their lives with a relative level of security for themselves and their family. Believe it or not, this includes white non-Muslims. Yes, even white people are, for the most part, a non-violent and peace-loving people.

And yet, it cannot be denied that some non-Muslims, including white non-Muslims, are not peaceful. Some are willing to take a severed pig’s head and throw it at a mosque in a drive-by pig’s-head-throwing. And, let’s face it. The terror may not stop there. Other acts of vandalism may follow as well. Or somebody may write on Facebook or Twitter that they want fewer Muslims in their country, which will probably be interpreted as a microaggression. These are, of course, troublesome portents to the average Muslim, but to understand why this is happening, we need to look at root causes. What actually motivates a non-Muslim to become radicalized to the point where they are willing to throw a pig’s head or commit a microagression on social media? Perhaps it’s the same kind of things that cause a Muslim to become radicalized and murder people in the name of Islam.

As we’ve been told by many liberal acquaintances, and liberal journalists, and liberal college professors, and liberal politicians, when non-Muslims oppose Islam then they are actually helping ISIS, the most well-funded Muslim terrorist organization in history, by making normal peace-loving Muslims feel alienated and unwanted in non-Muslim countries. This feeling of alienation then drives peace-loving Muslims to become radicalized and kill people. Now consider the perspective of the average non-Muslim. Unlike Muslims, who have countries that are explicitly Muslim, non-Muslim Americans and Europeans don’t have countries that are explicitly for them. These non-Muslim governments want to throw open the borders to foreigners of completely different cultures and any non-Muslim citizen in these countries who opposes mass immigration is labelled in the harshest, most ostracizing and career-ending manners possible. (“Racist!” “Fascist!” “Bigot!” “Nazi!” “Islamophobe!” “Uncompassionate!”) Talk about alienation! Sometimes, when people feel they have no peaceful way of expressing themselves or being heard, they turn to acts of terror, like throwing a pig’s head at a mosque.

So we should not be surprised if radical Islamophobia is on the rise. Non-Muslims are being deliberately silenced, informed that their opinions are not important, and that their governments will not defend them or their way of life. But Muslims should look on the bright side. In spite of the tiny fraction of the non-Islamic community that does harbor anti-Islamic sentiments and are willing to act upon them with harmless forms of vandalism and microagressions, the vast majority of non-Muslims harbor no ill-will, or at least not enough to take any meaningful action against Muslims. While a huge number of non-Muslims may in fact be unhappy by how their government is bringing huge numbers of Muslims into their country, the social costs are simply too great to bother with actually opposing what amounts to a tremendous victory and conquest for Islam over its non-Muslim enemies.

Further good news for Muslims can be found in the large numbers of young people, who, having completed their indoctrination in the public school system and academia are convinced that they have no culture, heritage, history, or lineage that is even worth defending. The one thing that many of these freshly brainwashed youths do feel is duty-bound to defend the rights of other people to come and destroy the culture, heritage, history, and lineage of our ancestors. As a result, they are opening their arms and welcoming those who may someday be our new masters (if the Muslims could have it their way…and who is stopping them, really?). Not only that, these young “tolerant” and “open-minded” liberals will fight on behalf of Muslims against anyone who opposes the total accommodation of Muslim peoples in non-Muslim countries.

To recap, Muslims really don’t have much to fear from radical Islamophobes. Yes, Islamophobia is on the rise, but most non-Muslims have not been radicalized and pose no threat to the burgeoning Muslim populations in both North America and Europe. Additionally, the governments, the media, and the educational systems of these two continents seem more interested in defending the interests of Muslim migrants than that of their own citizens. So Muslims have that going for them as well.

That said, however, we should not be surprised if anti-Muslim activities become more a regular occurrence, specifically among White Americans and Native Europeans. These populations are becoming completely shut out of the political discourse that concerns their own well-being, and as a result we will see some individuals take more drastic actions to ensure the survival of their people, not unlike a fearful creature backed into the corner of a cage. Such a scenario has unpredictable consequences. Will the beast attack? If so, how much damage will it do? Or, can it be contained until its spirit is broken? I, for one, hope the animal breaks out of its cage altogether.