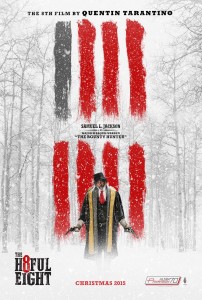 First things first, here’s the basic outline of the plot. The plot is, in any case, pretty basic. Spoiler warning: the following review reveals plot content that will save you wasting time and money. A bounty hunter named John Ruth (played by Kurt Russell) is on his way to Red Rock by stagecoach and handcuffed to his prisoner Daisy Domergue (Jennifer Jason Leigh), part of the Domergue Gang, who will be sentenced to hang there.

On the journey, they pick up another bounty hunter, Major Marquis Warren (Samuel L. Jackson) and later ex-Confederate soldier and apparently soon-to-be sheriff of Red Rock Chris Mannix (Walton Goggins). Due to a blizzard, they hole up at Minnie’s Haberdashery, where they are met by Oswaldo Mowbray (Tim Roth), Bob the Mexican (Demián Bichir), Joe Gage (Michael Madsen), and General Sanford Smithers (Bruce Dern).

Here, Ruth informs Warren that he suspects someone will try to rescue his prisoner and so confiscates the others’ firearms, with the exception of Warren’s, whom he trusts. The rest of the film is concerned with who will attempt to free Daisy and how, with a crudely inserted overly extended flashback to events at Minnie’s Haberdashery before Ruth and co’s arrival.

Let us get the obvious out of the way first: the expected foregrounding of racial “issues” in the film. Any film starring Samuel L. Jackson and produced by the Weinstein brothers is going to push the racial agenda. It is a foregone conclusion. Sure enough, we are treated to the two heroic archetypes in the film being a black former slave and Union army officer, Warren, and the white “enlightened” bounty hunter, John Ruth, who, after a few affected grumblings, is only too happy to help a black guy out. The bad guys, of course, are the ex-Confederates, especially General Sanford Smithers, who loves nothing better than to say how much he “hates niggers” –repeatedly.

There is a vague attempt at giving depth and complexity to these two-dimensional characters, but again it is all race-based. Jackson’s character, Major Marquis Warren, turns out to be a liar, breaking Ruth’s trust in him, who then begins to use the word nigger. The other ex-Confederate Mannix later befriends Warren for some unknown reason. Warren himself shows complete disdain for Whites in general and is given several long anti-White monologues, which I’m sure Jackson, the Weinsteins, and Tarantino relished.

One of these monologues is a gratuitous tale told to Smithers in which he claims to have killed the General’s son after marching him naked in the snow and forcing him to perform fellatio on him, which is all not only told, but shown. It ends with Warren/Jackson laughing long and hard and the audience is meant to laugh with him, as indeed the audience I was with did. Smithers then picks up the gun Warren has laid out for him, which gives Warren the excuse to shoot him so that the audience can cheer that the evil racist dies at the hands of a black man.

Okay then, at least there is a thread of reason for Warren’s tale within the film’s denouement. Yet where the film really falls flat as a film is there are also areas of complete incoherency and about as much consistency between plot development and characterisation as a WWE storyline. For example, the other overt and unashamed racist ex-Confederate, Mannix, strangely ends up on Warren’s side towards the end of the film. The plotline here is that one of the guests at Minnie’s Haberdashery has poisoned the coffee, resulting in the deaths of Ruth and his stagecoach driver O. B. Jackson (James Parks). Warren decides he can trust Mannix, as he was just about to drink the coffee himself, and gives him a gun to cover the other guests. But why would he trust someone who hates blacks, particularly when he has killed a fellow Confederate? Equally, why does Mannix then begin taking orders from a black man? Do we know? Do we care? Why should or can we care when Tarantino has not cared to create three-dimensional characters?

Perhaps this is all part of a live-action cartoon, and these are mere cartoon characters. Certainly, the violence is cartoonish, with Warren’s gun inexplicably becoming supercharged later in the film and suddenly able to blow people’s heads and faces clean off. Yet if this is so, then why are we being served this as high art for the contemporary age? Is it because culture has degenerated to such a level in the mass age that a schlock western is worthy of the highest praise? Is it because the critics are now a clique without taste or knowledge? Or is it just because it’s Tarantino?

The Tarantino characteristics are all there — Tarantino by numbers. Ultraviolence. Check. Pastiches of earlier works in the genre. Check. Lots of swearing and over-the-top dialogue. Check. Intertextuality. Check. Castration scene. Check. In the latter case, we are perhaps surprised that Jackson’s black supremacist character is the one who loses his manhood. As an old pool hustler friend of mine used to say, “Always let ’em win one every now and again; it keeps ’em interested.”

It is, however, getting more and more difficult to keep interested in Hollywood — and I’m not even referring to the propagandistic aspect of the films it churns out. Hollywood’s films have become increasingly tedious and unoriginal. The latest Star Wars [2] is a prime example. The main problem with The Hateful Eight is that the dialogue is largely uninteresting, with no depth to it whatsoever. Jennifer Jason Leigh’s character, Daisy Domergue is particularly annoying, her dialogue vacuous, and seems to be a dull caricature of Robin Weigert’s rather good portrayal of Calamity Jane in Deadwood. In all then, two and three quarter hours is a long time to be bored.