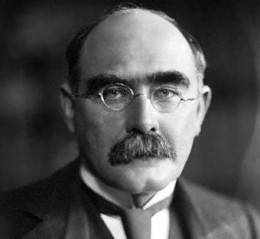 Joseph Rudyard Kipling was born 150 years ago today in Bombay, India, to a cultivated English family of artists and academics. After an often unhappy childhood at school in England, he returned to his beloved India where he worked as a journalist, short story writer, and author of light verse (including the original Barrack-Room Ballads).

From 1889 onward he lived for various periods in London; Brattleboro, Vermont (where his American wife’s family lived, and where he wrote the juvenile classics The Jungle Book and Captains Courageous); and then in Devon and Sussex in England; all the while traveling extensively in the Far East, North America, and South Africa.

By the turn of the century, age 34 or 35, he is said to have been the most highly paid writer in the world. Also one of the most famous personalities, friend to Mark Twain, Arthur Conan Doyle, and Henry James (who had gladly stepped in to give the bride away when Rudyard Kipling married the New England lady Carrie Balestier in London in 1892).

In 1899 he wrote a poem that became the theme song to the Boer War, “The Absent-Minded Beggar,” set to music with a tub-thumping marching tune by Sir Arthur Sullivan (who at this point had definitively ended his partnership with W. S. Gilbert). If you don’t know the song, just read a few lines and the probable melody will suggest itself—because Kipling verse is like that.

When you’ve shouted “Rule Britannia,” when you’ve sung “God Save the Queen,”
When you’ve finished killing Kruger with your mouth,
Will you kindly drop a shilling in my little tambourine
For a gentleman in khaki going south?

It’s a highly critical, rather cynical poem/song about the Boer War involvement. If you read or listen to the whole thing, you find many echoes of latter-day opposition to American involvement in recent Middle East wars. (“Oh we were totally opposed to it, but look at our veterans who have lost their limbs.”)

A century and more after his heyday, Kipling’s imagination still surrounds us. We can’t escape him. Recent years have seen a movie version of John LeCarré’s espionage classic Tinker Tailor Soldier Spy with Gary Oldman and Benedict Cumberbatch. (The novel had already been adapted—many people would say far more successfully—in the 1979 BBC series [2] with Alec Guinness, now freely available on YouTube. [3]) Whichever version you like, Tinker, Tailor was loosely based on the career of Soviet double-agent Harold Adrian Russell “Kim” Philby, of MI6, the KGB, The Economist, The Observer, and The Times of London. There has also been a bestselling biography of Kim Philby and his MI6 associates, by Ben Macintyre, called A Spy Among Friends [4] (2014).

Of making Kim Philby books and films there is no end. But the basic point here is that Kim Philby— his nickname, his profession, his drive and outlook—all derived from the imagination of Rudyard Kipling, the first writer to popularize the notion of “The Great Game,” or espionage. Phiby’s father, Harry St. John “Sinjin” Philiby, nicknamed his son Kim after the character Kimball O’Hara in the enormously popular juvenile novel that Kipling wrote 1900–1901, Kim.

The fictional Kim, based on Kipling’s youthful friends and peers in the India of the 1870s, was an Irish boy from a British Army family fallen among hard times while serving in the Raj. Young Kim had “two sides to his head”—loyalties to the Raj, and government and order; but also a psychic kinship with the Moslems, Hindus, and Parsees he had grown up around, and whom he regarded as his primary, albeit not ancestral, friends. Both Kim Philby and his father (a longtime friend of Ibn Saud who converted to Islam) highly identified with the Kipling character. Both were devoted to “The Great Game,” or espionage; another phrase popularized by Kipling.

Before anyone else conceived the expression, “going native,” Sinjin Philby and his son Kim were right there—identifying with and declaring their loyalties to the Third (or Fourth) World.

A sense of panic and despair rule much of Rudyard Kipling’s work. It’s as though he saw the future that ensued upon the colonial experience of the 1860s–1890s, and he did not much like it. Poets and other artists, Ezra Pound famously wrote [5], “are the antennae of the race.” So perhaps Kipling, a poet of the Raj and the British Empire, was also a prophet and analyst of the Empire’s doom.

George Orwell tried to analyze this paradox in a famous Horizon essay [6] on Kipling in 1942. Orwell loved Kipling, but in his world it was not politically correct to admit such a thing. Like Kipling, Orwell himself was a child of the Raj, having been born to a prosperous civil servant’s family in Calcutta. He adored Kipling, grew up on his writings, and defended him against accusations of “fascism” on the feeble grounds that Kipling was proto-fascist, a hopeless naïf!

But make no mistake about it. Rudyard Kipling was not a prophet of the Raj, or the decline of the British Empire, or a fascist. He was merely an everyday artist who dealt with daily despair about the pointlessness of existence, but kept on producing because he sensed that despair itself was merely one more funhouse-mirror distortion.

This delusion is one of the major themes in his work. It is memorialized in one of his lesser-known poems, “The Conundrum of the Workshops,” which spells out the apparent futility of artistic creation, and gave to us the classic, though usually uncredited, expression, “It’s pretty, but is it art?”

It’s a very dark poem, so I recommend the whole thing to anyone suffering from ennui or depression. Here is the opening stanza.

When the flush of a newborn sun fell first on Eden’s green and gold,
Our father Adam sat under the Tree and scratched with a stick in the mold;
And the first rude sketch that the world had seen as joy to his mighty heart,
Till the Devil whispered behind the leaves: “It’s pretty, but is it Art?”

It gets worse and worse afterwards, I guarantee you. Scary, bracing stuff!

Wherefore he called to his wife and fled to fashion his work anew—
The first of his race who cared a fig for the first, most dread review;
And he left his lore to the use of his sons—and that was a glorious gain
When the Devil chuckled: “Is it Art?” in the ear of the branded Cain.

They builded a tower to shiver the sky and wrench the stars apart,
Till the Devil grunted behind the bricks: “It’s striking, but is it Art?”
The stone was dropped by the quarry-side, and the idle derrick swung,
While each man talked of the aims of art, and each in an alien tongue.

They fought and they talked in the north and the south, they talked and they fought in the west,
Till the waters rose on the jabbering land, and the poor Red Clay had rest—
Had rest till the dank blank-canvas dawn when the dove was preened to start,
And the Devil bubbled below the keel: “It’s human, but is it Art?”

The tale is old as the Eden Tree—as new as the new-cut tooth—
For each man knows ere his lip-thatch grows he is master of Art and Truth;
And each man hears as the twilight nears, to the beat of his dying heart,
The Devil drum on the darkened pane: “You did it, but was it Art?”

We have learned to whittle the Eden Tree to the shape of a surplice-peg,
We have learned to bottle our parents twain in the yolk of an addled egg,
We know that the tail must wag the dog, as the horse is drawn by the cart;
But the Devil whoops, as he whooped of old: “It’s clever, but is it Art?”

Now, if we could win to the Eden Tree where the four great rivers flow,
And the wreath of Eve is red on the turf as she left it long ago,
And if we could come when the sentry slept, and softly scurry through,
By the favor of God we might know as much—as our father Adam knew.