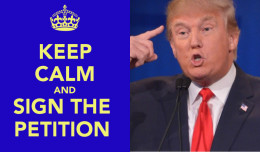 It was the best of times, it was the worst of times . . . Actually scratch that first part, and underline the second.

As we see in France [2] – and probably later in America [3] – the will of the people is not something the establishment is happy acknowledging, even if it has made its way through the multiple obstacles of an artificial and phony egalitarian morality, a mass media that is all false narratives, and a skewed political system where the money flows the other way.

The most they are willing to allow the people are a few token expressions. In the UK, for instance, people have the incredible “freedom” to sign e-petitions and to even have them ‘debated’ (i.e. briefly mentioned and then ignored) in the House of Commons if they get past a rarely reached threshold of 100,000 names. Hail the Revolution! Muh democracy!

But it seems that even this tiny bone of direct participation, thrown to the unrepresented masses, is subject to all sorts of sinister interference.

One is an expression of views in line with that of the British establishment:
Block Donald J Trump from UK entry [4].

The other is pro-Trump or simply pro-common-sense:
Don’t ban Trump from the United Kingdom [5].

Of course, there is no real intention to block Trump from the UK for what was actually a rather mild statement, because then the British government might have to do a bit more explaining about all the terrorists, jihadists [6], and barbarians from the Gulf States [7] it allows to freely cross its borders. But the petition is symbolic and sends out the message the establishment wants to send out, namely:

“Although we may run into problems actually banning a man who could become the next US President from entering the UK, his views on Muslims are simply not welcome here, and our people have been suitably brainwashed [8] to love Muslims. So, don’t worry, our Saudi friends; keep banking in the City, boosting our property market [9], buying our weapons, and using our prostitutes.”

For this reason, Her Majesty’s Government (sic) has a vested interest in one Trump petition doing rather better than the other. But they are not content to just cheer from the sidelines. Under cover of the fact that a lot of names on petitions turn out to be false, HMG has actually been involved in “trimming” the pro-Trump petition, while allowing every dubious name on the anti-Trump petition to go unchallenged.

There are currently 557,571 signatures on the anti-Trump petition, but a recent freedom of information request by a Eddy Butler, a prominent English nationalist, revealed that zero names had been deleted for suspicion of being fraudulent from this list.

Contrast this with the pro-Trump petition. There are currently 37,626 signatures on this petition, but a further 30,000 names have actually been deleted for being suspected of being “fraudulent.” One reason for this rather churlish action is that HMG is keen to prevent the pro-Trump petition reaching the 100,000 threshold, because then the petition has to be officially considered for a debate in parliament [10].

Such gerrymandering of the political process of course marches lock-step with multiculturalism, reminding us once again that you can never have true democracy in the modern age without having secure nationalism first.