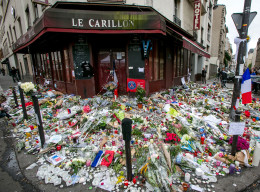 Following the attacks, a SWPLy crowd in the Place de la République unleashed a barrage of warm hugs upon blindfolded Muslim men. NBC Nightly News anchor Lester Holt praised this snugglefest [2] as a means to “heal the tensions” brought on by the jihadist terror.

Meanwhile, nearby, at a makeshift memorial of flowers and candles, a francophone Asian man explained the attack, and his strategy for counter-attack, to his distraught son: “It’s ok. They might have guns, but we have flowers.” This too, like the hug-a-Muslim rally, went straight to the international news desks. NBC’s Lester Holt, again, lavished praise on this peacenik response [3], claiming that this father had demonstrated “the perfect way to explain [terrorism] to his child.”

Then, Frenchman Antoine Leiris exacted his revenge on the jihadists who killed his wife by publically assuring them, on Facebook, that he would not give them “the Gift of Hate.” This retaliation went viral, tantalizing the tender feels of SWPLs worldwide. Holt yet again praised such lovey-dovey sentiments [4] as “a powerful message about refusing to give in to hate.”

Citing an article in Dabiq [6], the official magazine of ISIS, Blumenthal explains how the terrorists’ strategy of conquest involves provoking, via their attacks, the persecution of Muslims in general, which would in turn drive more of them to align themselves with the caliphate.