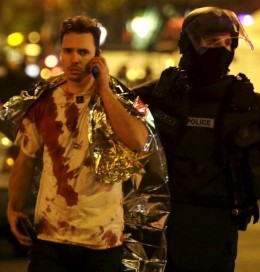 The rationalizations peddled by the controlled media for the reckless acceptance of ever-increasing numbers of unscreened migrants not only sound hollow, but have been vaporized along with the Jihadi Bride who detonated in Saint-Denis. There can no longer be any doubt that the Muslim population in Europe is by its nature aggressive, dangerous, and an existential threat to the French and German people. News emerged November 18th that a bomb plot targeting a soccer stadium in Hanover [3] was foiled with minutes to spare, as police were tipped off to the existence of an ambulance packed with explosives.

Germany is reaching the boiling point as small towns of native Germans are being swamped overnight by the addition of tent slums. In Saxony a mob shouted Merkel down as a “traitor to the people” and a “whore.” About three weeks later, Breitbart London [4] reported that in Lower Saxony, a village of less than a hundred was being forced to accept over a thousand migrants. The scale of state-supported displacement has reached unimaginable levels as Biblical-style exodus treks occur by the numberless third world from Greece up to Northern Europe.

But this push to trample Europeans into the mud of their own lands is the culmination of increasing state-mandated laxity on border controls [5] in all the extreme liberal democratic countries — France, Germany, and Britain being the most ethno-suicidal. France has huge numbers of North Africans, many of whom are first, second, and third generation migrant colonists that have never assimilated and remain violent outsiders to French society, festering in the concrete suburbs around Paris Central.