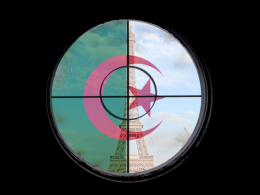 The events [2] of November 13, 2015 will live in infamy in the public memory for some time. Millions of Facebook accounts have signaled their solidarity with the victims of the attacks by placing a filter of the French tricolor, the symbol of the Fifth Republic, over their profile pictures. It is a well-intentioned, but frankly meaningless non-action, and perhaps even a non-thought. How many of these people grasp the true context and reality of what has happened to France, what will continue to happen, and why? Presumably very few, though ignorance alone would be sufferable. What the French body politic practices is not ignorance, it is deceit, and deceiving an entire nation for the wrong reasons is indefensible treason.

From the left, which is hegemonic [3] in Western European politics and media (France is ruled by socialists), the narrative is already a delusional miasma of doctrinal talking points about Islam and multiculturalism:

Pay no attention to the ethno-religious origins of the suspects, or the Syrian passport checked in Greece. As a foul, vulgar far-rightist [5], I cannot help but wonder why I am not allowed to politicize events like this while leftists are allowed to politicize the Charleston church shooting [6], to give one of many examples. Surely if Whites are collectively responsible for racially-motivated shootings, Muslims are collectively responsible for religiously-motivated shootings, bombings and terror attacks. Thankfully for the narrative, this only runs in one direction and most people are totally fine with that. Muslims are a designated oppressed class and therefore protected by law, media and society. Terrorists just happen to be Muslim and the ones that are aren’t real Muslims anyway, goy.

Under the Fifth Republic, the native French (and any ethnocentrism they express) are viewed with suspicion and hostility by the state, which is a proposition nation—liberté, égalité, fraternité—committed to multiculturalism, Diversity™ and signaling [7]. As such, the notion that the ethnic French are the victims of Islamic terror is impossible. The real victim is multiculturalism, which will now come under attack by those evil bigots who irrationally hate Muslims and think that if France had no Muslims there would be no Muslim terrorists. France cannot let the far-right champion the interests of the ethnic French because that would undermine France’s image as a diverse and progressive Current Year® country that places the needs of others before itself, to the point of suicide. Self-hate is a virtue among traitors. The Fifth Republic, evidently, is not run by the French for the French. This is not unique as far as postwar European governments [8] are concerned, but it is particularly ironic given the history of France and the decolonization of her overseas holdings. It is pretty offensive that Algeria gained independence as a nation-state as France became a multi-ethnic state. For what purpose was releasing Algeria from the republic justified if importing Algerians became state policy?

That the Fifth Republic believes in multiculturalism for France but nationhood for the Third World is wholly incompatible with its own history and policies towards other countries (my Anglo sensibilities demand consistency and fairness). If nationalism is irrelevant to the functioning and flourishing of a country’s population, why on earth did France release the Islamic population of Algeria from her control in 1962—thus creating the nation-state of Algeria—and welcome millions of European pied-noirs and North Africa Sephardim into Metropolitan France from Algeria? Was it because France was aware that ethnic French people and jews could not live under a postcolonial Islamic state safely? Wouldn’t Diversity™ have been a great, if not the greatest strength [9] Algeria had? There must have been a vestigial nationalism felt by the French towards their emigres as one folk who should live together. Even importing North African jews could be rationalized in the wake of WWII [10]. But why then over the following decades did France welcome millions of Muslims into its territory from Africa and the Middle East as laborers, including their former wartime enemies, Algerians? I thought Algerians and French people were incompatible under the same political union!

If France was going to adopt multiculturalism and import millions of Algerian Muslims and give them citizenship, it would have been more efficient to simply keep Algeria as an integral part of France. Was nationhood appropriate for Algeria because the ethnic conflict between French settlers and North African Muslims couldn’t be resolved without the French evacuating Algeria? So when there is ethnic conflict between French natives and Afro-Islamic colonists in France, as there has been with varying degrees of intensity for decades, is the solution not nationalism for France and not the Muslim evacuation of Europe? Can France withdraw from Paris like it did from Algiers if identity-based violence gets out of hand there?

No, it can’t. France is being colonized by tribal Muslims while promoting multiculturalism and anti-identity for her native sons and daughters. We already know nationalism for European peoples is verboten, so this is a problem that the Fifth Republic literally cannot solve under its current configuration. France must place the interests of all her minorities first, even when those minorities are violently anti-French, as they were in 2004, 2014, and twice in 2015. The French state is set up to encourage the migration of Muslims into the country and to defend them against French nationalism. That is not a legitimate government; it is run for a foreign minority. It is a Semitic client-republic. Unless the French nation politically separates itself from the French state or electorally deposes the Fifth Republic, Mahomet is Emperor of the French.