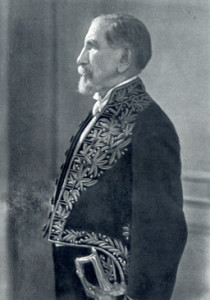 Perhaps the greatest threat to the Right is our elites’ ability to have our people “rally-round-the-flag” against those who are not our primary enemies in the name of parochial chauvinism and state loyalty. This was arguably true in both World Wars and largely sums up the entire counter-jihadi movement. Let us take Carl Schmitt to heart and not be Israel’s useful idiots . . .

Yet, I do not forget that Charles Maurras was in 1914 one of the political leaders who pushed French patriots to go off and be killed en masse in the trenches. What was the result of this disastrous policy?

Well, certainly, Alsace-Lorraine was recovered. What a bargain!

A century later, we can say: Maurras’ political choice was a disaster for our side. As far as I am concerned, I cannot walk through a village and see the names of Frenchmen on the monuments to the dead without cursing this war.

And let it not be said that we need to put things back in their context, that anti-German sentiment was widespread among the French public after the defeat of 1870, that we first and above all had to defend our borders, etc.

Édouard Drumont wrote his books after 1870 and was never a fanatical and ridiculous Germanophobe like Charles Maurras. He [Drumont], at least, understood who the enemy was. In the following generation, Lucien Rebatet and Céline, among others, had also understood the nature of the evil to be fought against. One needs to read Lucien Rebatet’s Les Décombres and Céline’s L’École des cadavres.

I have kept a few of Maurras’ books in my little library. I’ve had to place them between the biographies of Louis XV and Marie de Médicis. It is true that at least they are here, whereas hundreds of others did not successfully pass the test and have inopportunely fallen into the garbage. There is a small book by Alain de Benoist, folded in half, which I use as a wedge for the IKEA couch on which I am sitting as I write. That way one is comfortable! [. . .]

The original French version of this article appeared at Hervé Ryssen [2] on September 21, 2015.