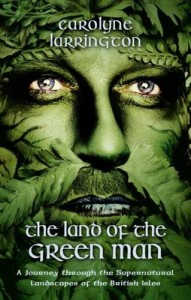 Carolyne Larrington
The Land of the Green Man: A Journey Through the Supernatural Landscapes of the British Isles [2]

Is Britain the most mystical of all countries? It certainly seems that way to me, but then I’m irreparably biased. Whilst every human culture has its own folklore, the magic seems more potent, more alive, when it’s our own. “The myth is not my own, I had it from my mother,” as Coomaraswamy (quoting Euripides) would have it. Carolyne Larrington’s new book, The Land of the Green Man, will appeal to anyone who, like me, has an unquenchable thirst for tales of the supernatural inhabitants of the isles of Albion.

Perhaps my only reservations about this book are its cover and title. Stumbling across it in a bookshop, the serious student of folklore might assume that it’s just another new age effort seeking to stitch together a few disparate tales into an overarching and unwarranted key to all mythologies. This would be a great shame as The Land of the Green Man is a fascinating discussion of a living tradition of folklore which is based on sound scholarship. As a scholar of Medieval Literature, Larrington is well placed to bring an academic perspective to these matters. In fact, I was previously aware of Caroline Larrington from her English translation of the Poetic Edda although I have always found that translation to be too academic for my tastes. It certainly doesn’t stand up to reading aloud as well as Henry Bellows’ old-fashioned but rhetorically fine-tuned translation. But it does demonstrate Larrington’s immersion in the sort of mythological matrix that often underlies folk traditions. Her ear for the rhythms and structures embedded in folklore is finely attuned and it lends an authoritative depth of understanding to her various interpretations of ballads, fairy tales, and local stories.

The book is divided into six chapters, each of which deals with a particular thematic concern: “The Land Over Time,” “Lust and Love,” “Death and Loss,” “Gain and Lack,” “The Beast and the Human,” and “Continuity and Change.” Often, books that attempt to compile together folkloric material will group it together by county or town, like Westwood and Simpson’s The Lore of the Land. Steve Roud’s The English Year structures the material according to its place in the calendar. Inevitably, I always end up consulting The Lore of the Land for the areas that I am familiar with and I always read The English Year during the first few days of January when I remember that I own it. By eschewing the gazateer/ritual year approach Larrington has written a book that benefits from a coherent narrative flow.

The approach throughout is to introduce a topic through a few relevant stories and then to tease out those aspects that are relevant to the chapter’s subject. Other examples of similar motifs are then brought to the discussion. So, in the chapter on “Lust and Love,” the ballads of “Thomas the Rhymer,” “Tam Lin,” and “The Elfin-Knight” are recounted and discussed and the threads discovered there are traced through Hayao Miyazaki’s animation, Spirited Away, Christina Rossetti, Harry Potter, and Susanna Clarke’s novel Jonathan Strange and Mr Norrell.

Larrington’s interpretations of the inner meanings of folkloric material do tend to veer towards what we might call the materialistic. That is, she approaches each chapter looking for a sociological or ideological understanding of the material at hand (as the chapter titles indicate). But there are two things that prevent this from being a dull, reductionist reading of the folklore.

The first is that she has a terrific understanding of the inner meanings of folk tales. For instance, she discusses the multiple occasions when the elfish denizens of the Otherworld distort what people see by applying magical ointment to their eyes, or by other methods. Typically, this is to hide their true nature as Otherworldly creatures and to make them appear as human. Inevitably, at some point the magic stops working, and the elf is seen for what he really is. When Larrington then says that the restoration of correct vision is, “a proxy for a loss of innocence, a fall into knowledge and desire which has irreversible consequences,” this does not feel like a forced interpretation of the texts. Instead, it comes across as something that emerges naturally from multiple stories; it is not distorted or over-emphasized in order to support a pre-existing ideological position. The conclusions are allowed to arise from the material.

The second thing that elevates the book is Larrington’s consistent understanding that folklore is a living and evolving tradition, not simply a matter for archiving. This leads to some very interesting connections being made between the archaic material and contemporary culture. Perhaps unsurprisingly, Larrington discusses Alan Garner and Susan Cooper’s use of myth and folklore in their novels, and the work of J. R. R. Tolkien, but some of the other references are less expected. In the chapter on “Death and Loss,” she discusses not only the BBC’s Sherlock, but also Nick Drake and the glam rock band The Darkness. Lest it be thought that these references are casually thrown in to widen the appeal of the book, it is worth emphasizing that Larrington always relates them to specific folkloric material (the three examples above are all to do with black dogs: Baskerville, Black-Eyed Dog, and Black Shuck respectively).

This approach leads to some really lively discussions and throws up a few surprising notions. In a section on house-elves, Larrington discusses Dobby, the house-elf from J. K. Rowling’s Harry Potter books. In these books, the house-elves work as slaves, without any payment, just as traditional house-elves do. But in Harry Potter, Hermione decides that they need to be liberated. They are, “classic victims of false consciousness, as Marx might have put it” (p. 147). Hermione’s efforts are apparently unsuccessful because the house-elves have no desire to change their ways. “Hermione’s idealism is that of the liberal do-gooder. In failing to consult the house-elf constituency she alienates those whom she is trying to help: the classic dilemma of the intelligentsia trying to persuade the workers of what’s good for them . . . Dobby’s failure to engage his fellow elves in revolutionary struggle . . . hints at Rowling’s cynicism about the politics of the left” (p. 148). This is not the sort of thing I was expecting from Land of the Green Man, but it’s a wonderful analysis, and it gives a good sense of the work’s scope.

At the end of the book, Larrington discusses the history of the Green Man himself, pointing out that he has no real folkloric associations. But, she argues, this does not necessarily matter, because the twentieth century “creation” of the Green Man as an ancient vegetation god answers some of that century’s anxieties: “It’s hard to read the expression in his face; if he’s smiling it’s an enigmatic smile, hidden among the foliage. Neither kindly nor welcoming, his stare suggests a countryside that has become deeply alienated from the modern human” (p. 232). And it’s in this understanding that Land of the Green Man differs from many other books on folklore. Larrington is too much of a scholar to try to pretend that the Green Man is an authentically ancient symbol of the woodland but she is also too receptive to the power of living symbols to deny that he is, in some sense, “real.” Unlike most other writers on the subject, Larrington seems to understand that new gods can, and must, be born.

The Land of the Green Man is an essential read for anyone interested in the wyrd history of Albion. Carolyne Larrington does an admirable and convincing job of demonstrating that whilst this story has had a varied and strange past, it is continuing to progress towards a numinous future.