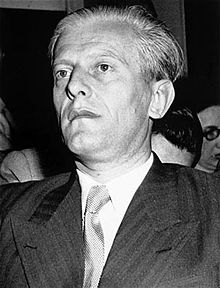 The following is translated from Dominique Venner’s Histoire de la Collaboration (Paris: Gérard Watelet/Pygmalion, 2000), 160-62, under the heading “Weakening the defeated to better get along with him.” The title is editorial, and refers to German Ambassador to Paris Otto Abetz, who was said to rule like “King Otto” over the French capital and in particular its vibrant cultural scene.

The least one can say is that the character [Otto Abetz] is not simple and is not easy to assess. In this regard, the minutes of his trial before the Paris Military Tribunal, in 1949, are a precious document. We discover a man, who was responsible for Franco-German policy between 1940 and 1944, placed in the most difficult situation, that of the vanquished after having been the victor, reduced to nothing, judged by a hostile court, after fours years in prison in tough conditions. Abetz appears in his truth, without any of the artifices that he disposed of in the days of his power.

Taking his responsibility, he chose to not blame anyone, neither his superiors nor his subordinates, which he covered for everything. The account of Jean Bernard-Derosne, a journalist in no way supportive of the accused, shows the latter dominating the debates with a lively intelligence, character, a somewhat cynical humor, and a perfect mastery of French.[1]

As court president Pihier began lecturing at length on collaboration, he prompted this reply [from Abetz]: “Collaboration? I am German. And if you must now – well! – Hitler never believed in it. He was attentiste,[2] but the tragedy is that, when a decision had to be made, he always opted for that of force. I cannot help that.”

Using the old courtroom technique for denigrating the accused, the judge suggested that he had ceded to an all-consuming ambition in accepting to come to Paris. [Abetz responded:] “An ambition to become ambassador? No, Monsieur le Président, I aimed much higher. I wanted to be the man of the coming together of our two countries.”

The magistrate replied: “From the moment you accepted the office of ambassador of the Reich, you knew well that you would have to implement in France the ideas of your leaders. Yet, you accepted this office. Why?”

To which Abetz, smiling and sardonic, replied with a carefully-calculated smoothness: “But, Monsieur le Président, I was there for that and was only doing my duty.”

It was almost as if, Bernard-Derosne noted with irony, the judge was reproaching him for having collaborated with Germany and not having deserted his post to join General de Gaulle in London. With a touch of insolence, Abetz brought him back to reality: “But you know well, Monsieur le Président, that every victorious country seeks to weaken the defeated. Look at what is happening right now in Germany! And what . . . I was fulfilling my role. It is true that I was at bottom in favor of certain democratic liberties in France. An admission, however: This was in my opinion the only away to prevent the French unity that we feared. You know well that the victor always fears the vanquished a little, no? . . .”

An interesting confession. Following orders, Abetz wanted to prevent France from recovering her unity and strength, for fear that she would return to her bellicose disposition towards Germany. And here, he was in his role as the representative of the Reich. Simultaneously, by francophilia, he did what he could to protect French culture against those who wanted to put an end to this irritating superiority of France’s.

Testifying in the trial of his superior, Karl Epting, director of the German Institute,[3] stated: “The instructions that I received from Ambassador Abetz for the organization of intellectual, university, literary, and artistic life were exactly opposite of those contained in the orders of the Ministry of Propaganda.” It is indeed under the instructions of the Embassy that were published and distributed between 1940 and 1944 works of writers notoriously hostile to the Collaboration: Louis Aragon, Elsa Triolet, Paul Eluard, Louise de Vilmorin, François Mauriac, Albert Camus, Maxence Van der Meersch, Paul Claudel, Pierre Seghers, Jacques Audiberti, etc.[4]

1. Incarcerated after the Liberation in the military prison of Cherche-Midi, Abetz would be condemned to 20 years of forced labor for “war crimes” by the Paris Military Tribunal in July 1949. Freed in 1951, he would die in 1958, as would his wife, in a car accident near Düsseldorf.

2. A “wait-and-see-ist,” a term used for the majority of Frenchmen during the war. – GD

3. Ancestor of the Goethe Institute. – GD

4. In his thesis on L’Image de la France dans l’Allemagne nazie (Rennes University Press, 1999), Wolfgang Geiger dedicates a chapter to Karl Epting and the Embassy’s cultural policy. The deeds and gestures he reports, the texts he cites, show in Abetz and Epting a sincere and constant desire to preserve French culture, all the while promoting German culture. But for the author, these deeds only serve as a cover for dastardly motives, for which he presents no evidence. This chapter provides a good example of anachronistic readings of the 1940-1944 period by an otherwise serious and documented author, but suffering from the “force of prejudice.”