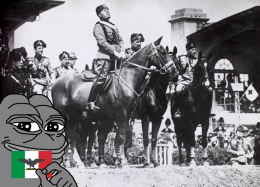 [1]While varying degrees of ethno-nationalism, the aesthetics of the 1920s, ’30s, and ’40s, and a sense of humor that is deeply Hyperborean are all commonplace on the alt-right, most of us are not actual fascists in the sense that we adhere to the beliefs and political programs outlined and implemented by leaders like Mussolini or Codreanu almost a century ago.

I say this not to counter-signal against modern-day fascists to the right of me, but just as a simple observation: there are many other interpretations of how to best organize or reorganize society within the alt-right’s tent, and fascism is only one of them. In my opinion, especially in our predominantly Anglo-American [2] context, fascism seems distinctly removed from the folkways and traditional forms of government espoused by our people. Merely importing European fascism does not allow for a synthesis to take place but chafes against our history of suspicion towards an overly-powerful state, a useful suspicion.

But while we are free to debate such things in our own space—though we would be better off spending time promoting the common goal of advancing the interests of our tribe—this is a distinction typically lost on everyone else, and often deliberately. Since the dismemberment of Germany at the end of the Second World War, the cosmology of the left has been one of a Manichean war between the fasces and the dildo. Fascism becomes the evil superego haunting the leftist ego—they position themselves as eternally fighting the forces of fascism in order to bring about their false-utopian program of mocha-colored liberation, equality and the destruction of all non-colonial identities. And they would have gotten away with social justice too if it weren’t for those meddling police-state nazis!

Unfortunately, fascism as we remember it no longer exists as a political threat to the hegemony of the Left [3] in terms of electoral politics and the Overton window. Name one actual fascist party credibly threatening a sitting Left-wing, center-Left, or cuckservative [4] administration with the power to win a governing majority.

That’s right; there are none. Not even Hungary [5] is fascist. Trump [6] isn’t a fascist either, not until I hear him say: ein Volk, ein Reich, ein Drumpf. What then is fascism if the Left believes it is currently fighting it? Social conservatism? Economic neoliberalism? Austerity policies? A meek civic or cultural nationalism? Anti-Islam expressed during an ongoing global war between Islamic terrorists and everyone else? Nativism? Xenophobia? Protectionist attitudes of working class Whites? Christianity? None of this is fascism. Even if you put all of these together it still wouldn’t be fascism; it would probably resemble paleoconservatism.

So what is this fascism we hear about? “Fascism” is just anything the Left is currently opposing; its raison d’etre is suppress anyone or anything that suggests equality is a myth and our world should be organized around the assumption that this is so. Fascism is the enemy they can most zealously mobilize against, because historically it was the most effective at suppressing them. The threat survives in their collective psyche as a sinister bogeyman.

The rise of identity politics over the last couple of decades has made things more explicit. Fascism seen from the Left is no longer just being illiberal; it’s gotten its ethnic component back. Now we have to amend our understanding of what is meant [7] by the Left when they cry fascism: anyone or anything that suggests there is a positive and collectively self-interested identity for Whites to express politically. This is something that developed slowly, especially in the United States where we still nominally have freedom of speech [8], but is now largely impossible to not notice for those literate in metapolitics. Everything from cuckservatism to so-called microaggressions points in that direction: being White is bad and you should feel bad. Opposition to this is racism, and racism is illiberal, ergo you are a fascist.

I suppose with that we’ve arrived back at my initial inquiry as to what the relationship between the alt-right and fascism is, and how our enemies see us. So undeniably, to the Left, we are fascists. We humble few who write and meme in the name of our kin in cyberspace are a scant shadow of the old Right. In the context of the hegemony of the Left and the paradigms they create and enforce, fascism still lives in their minds as a strong and viable force. Yet for many if not most of us, the label of fascism does not accurately explain what we ideally want or believe to be possible. But until the hegemony of the Left is replaced with a hegemony of the Right, this is as inescapable as night and day.

We might not all be fascists, but we’re all a little fash whether we want to be or not. We’re fashy goys: we think a lot of nasty thoughts that keep Leftists up at night during their struggle sessions. Might as well embrace it, and let the jimmies rustle softly across the dildosphere.