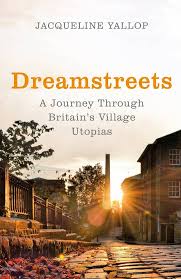 Dreamstreets tells the story of various ‘model villages’ that were built during the industrial revolution and beyond but it also tells a wider history of Britain through the nineteenth century. For the purposes of the book, a model village is defined as a town or village built by a company or individual, “to house workers, to make concrete radical philosophies and to try out experimental solutions to social and economic problems.”[x]

It is a structurally repetitive book as each village that is discussed ends up being about the man who built it and each of these men displays a similar combination of avarice and philanthropy. But the individual peculiarities of each story and the sense of an overarching historical narrative mitigate any sense of monotony. Instead, Dreamstreets is an engaging evocation of a Britain that is both unrecognizably self-confident and familiarly modernist.

The first chapter concentrates on Richard Arkwright’s revolutionary cotton mill at Cromford in Derbyshire which was built in 1783. This was the first water driven cotton mill and as such it represented a profound breach with the past: “At all hours and on all days, Cromford was noisy and bustling, modern and anxious, a place of change and disruption where old habits were dislocated and new ones not yet formed.”[4] Although not discussed by Yallop, Joseph Wright’s painting of Arkwright’s factory illustrates perfectly this sense of an anachronistic future suddenly appearing in Derbyshire’s timeless, rural landscape. As well as being powered by water rather than horses, Cromford also had a shift pattern of work so that it was productive for 24 hours a day. Wright’s painting shows the five storey factory at night, its windows illuminated by candles. Clearly, there was no existing aesthetic style that could render the reality of industrial life at this period so Wright’s painting simply depicts the factory as part of the pastoral landscape. But those windows, whose light starts to compete with the moon’s, are an eerie acknowledgement that the world was changing in ways that couldn’t yet be foreseen.

A recurring theme of the book is the ways in which capitalist progress was often intermingled with a sense of personal and social morality. The small miners’ village of Nenthead was built by the London Lead Company in 1825. The London Lead Company, founded in 1692, was one of the many Quaker businesses that thrived at this time. Yallop describes how, as a religious minority, Quakers were still barred from universities and the professions at the beginning of the eighteenth century. These legal restrictions encouraged them to go into business, something at which they thrived. This is perhaps a salutary lesson in the law of unintended consequences.

The fusion of philanthropy and capitalism is further explored with reference to the type of village that the Quaker industrialists deemed to be desirable. The miners’ children who lived in Nenthead were obliged to attend school daily and Sunday school weekly. This was the first example of compulsory education in Britain. In addition, literacy was encouraged amongst the miners, and Nenthead also has the distinction of possessing the first free library in England. These provisions were part of a broader social outlook that sought to promote sobriety, orderliness, and discipline, and Yallop is keen to point out that all of these things were seen as being beneficial to the company. Wherever these pioneering businessmen attempt to establish a microcosmic civil society it always coincides with an acknowledgement that it will also boost profits.

Yallop is not heavy handed with the critique, but it is clear that this is a manner of deconstructing the motives of the Victorian entrepreneurs. Their philanthropic, reformist programs are a sort of convenient front for their naked avarice, so the argument would go. The more I read of Dreamstreets, the more I started to think of the so-called ‘patchwork’ idea of a certain strain of Neoreactionaries. According to this idea, corporations will continue to eclipse the nation-state to the extent that societies will increasingly be run like companies (and, in fact, by companies), with citizens becoming more like consumers. The truth of this trajectory seems to me unassailable, the only question being whether it is a development to be encouraged or arrested. But what Dreamstreets brought home to me was that it’s a trajectory that was already being tested out in the late eighteenth century. In fact, in some respects one could say that the nation-state was already redundant in the late 1700s.

Each of the chapters is rather peripatetic, drifting away from the main subject matter to discuss wider historical processes. So, in the chapter on Edensor in Derbyshire, which seems to have been an impressive vanity project on behalf of the 6th Duke of Devonshire, there is a discussion of William Gilpin’s notion of ‘the picturesque’, a response to Edmund Burke’s ideas concerning the sublime. Interest in this sort of aesthetic debate lead to a greater concern for the visual, compositional aspect of village design.

Yallop is extremely good at reading these wider processes into specific architectural examples. So, “at Edensor, the emphasis is on ornament and difference and extravagance. Windows come in all shapes and sizes, from the mullioned bay to the Georgian sash. There are dressed and carved stone lintels and sills; decorative niches, arches and date stones. Wooden gables are sculpted; fences and porches are trellised and pinnacled. Iron railings, garden walls and gateways are designed with care, cradling the changing levels of the land, topped with an assortment of balls and turrets and pediments.”[93] Such readable architectural analyses are at the heart of this book.

This development towards placing aesthetic concerns at the center of village planning culminated in the huge influence wielded by the Arts and Crafts movement. At Creswell in Derbyshire another mining village was built in 1895 by the Bolsover Colliery Company. The architect, Percy Bond Houfton, was influenced by the ideas of both Ruskin and the Pre-Raphaelite Brotherhood, and at Creswell he crafted a village with open, green spaces with the hope of improving the well-being of the inhabitants. The buildings were more decorous than those in the earlier model villages and Yallop detects a sense of pretentious affectation in these flourishes. It almost reads as a prequel to the present wave of gentrification which is another double-edged sword.

Another important development that emerged in the mid-nineteenth century was the growth of advertising. Port Sunlight in the Wirral was built to house workers for the soap manufacturer, Lever Brothers. In fact, it was named after their most successful brand of soap, Sunlight, thus foreshadowing the contemporary concerns with commercial branding by more than a century. Yallop develops an engaging discussion on the birth of advertising and makes several interesting points. For instance, “one of the advantages of Sunlight Soap, for example, was that it was sold in pre-wrapped bars instead of being cut from a single large block on the grocer’s counter. This meant it could be more easily stored at home – it also, of course, offered Lever the opportunity to print his mark on every single sale and place his advertising on every pantry shelf.”[160-1] Here, we see the early stage of a trend that culminates with targeted advertising based on tracking online behavior.

Of course, it is no surprise to the reader that these sorts of practices associated with capitalism arose in the eighteenth and nineteenth centuries. But the joy of Dreamstreets comes from the fact that by focusing on an ostensibly narrow and rather eccentric subject Yallop is able to illuminate great swathes of British history. It’s also no great surprise that we have yet to establish an acceptable utopia, but Yallop’s book reminds us that many contemporary responses to capitalism are reformulations of issues that were already well established long before any of us were born. Dreamstreets is an enjoyable and unexpectedly thought-provoking book.