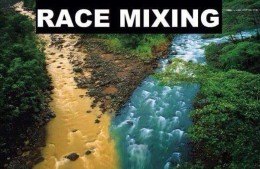 White Nationalists are united in the belief that our race is threatened with simple biological extinction. This is often dismissed as alarmism, but, as I have shown [6], one can make a very simple and compelling argument that whites will go extinct if present trends continue. The purpose of White Nationalism is to interrupt those trends.

Some White Nationalists go one step further, arguing that our race is being intentionally driven to extinction, i.e., that whites are the targets of genocide [7]. This claim too is dismissed as not just alarmist but crazy. Nevertheless, I shall argue that white genocide is actually happening. There are people in positions of power who are promoting policies that they know will lead to the extinction of the white race. Unless, of course, we stop them.

It seems counter-intuitive to claim that whites are the victims of genocide. Whites are not being slaughtered by the millions, which is the image that most people have of genocide. To all appearances, our race is powerful, prosperous, and populous. But defenders of the White Genocide thesis point to the 1948 United Nations Convention on Prevention and Punishment of the Crime of Genocide [8], which in Article II defines genocide as

. . . any of the following acts committed with intent to destroy, in whole or in part, a national, ethnical, racial or religious group, as such:

(a) Killing members of the group;

(b) Causing serious bodily or mental harm to members of the group;

(c) Deliberately inflicting on the group conditions of life calculated to bring about its physical destruction in whole or in part;

(d) Imposing measures intended to prevent births within the group; . . .

This definition of genocide is much broader than outright mass murder. In particular, points (c) and (d) are consistent with characterizing policies that destroy a group slowly, over long periods of time, as genocidal as well. So genocide comes in two forms, which we can call fast, hot genocide and slow, cold genocide. White extinction falls into the latter category.

White extinction means that in every white nation, reproduction rates have fallen below replacement, which means that more whites will die than are being born, until whites cease to exist as a distinct race.

There are five principal causes of white extinction. I am sure that other factors could be added to this list, but if just these five problems were addressed, I would no longer fear for the future of our race.

These factors are not blind forces of nature, like an asteroid colliding with earth. They were all created by human beings. Some of them, like feminism, birth control pills, legalized abortion, and overturning racial segregation, immigration restrictions, and bans on miscegenation are quite recent. They were hatched in the minds of intellectuals, artists, scientists, politicians, educators, and advertisers. They were made real by changing people’s beliefs and values, and by altering the laws and institutions that govern us.

But all of these things could be changed. People could be taught to value family life over selfishness, hedonism, and careerism; feminism could be discouraged; access to birth control and abortion could be restricted; laws could be changed to make family formation affordable; racial separation, immigration restriction, and economic nationalism could become policy again; miscegenation could be outlawed. Indeed, White Nationalists support just such policies to halt white extinction.

Of course it is possible, and in many cases, it is true. The majority of people who advocate individualism and racial egalitarianism are simply unaware that these values are promoting the ongoing extinction of the white race. Our job is to inform them.

But when such people are informed, their reactions fall into several categories. Some will simply refuse to accept that white extinction is taking place. Of those who accept that white extinction is actually happening, some will wish to stop it, and others will not. Of the latter, some will simply not care, and others will actually cheer the process on.

There is, however, a difference between people who might sign on to policies promoting white genocide after the fact and those who might conceive and execute such policies before the fact and with full awareness of their consequences. What evidence is there that such people exist?

First, the burden of proof needs to be shifted. For is it really plausible that the leaders of dozens of white nations have adopted similar policies antithetical to the long-term survival of their own peoples, yet none of them knew what they are doing?

Yes, it is fashionable to deride politicians for thinking only in terms of the next election. But that is not really true. Politicians are, for instance, rather far-sighted when it comes to their personal career ambitions and plans. Beyond that, our ruling elites do not consist simply of democratic politicians. Moreover, the ruling elites in every form of society are noted for thinking and planning ahead. Both government intelligence agencies and private think tanks are in the business of generating long-term predictions based on current trends, and planning accordingly. Thus it is just not plausible that our leaders are unaware of white extinction. They either don’t care about it, or they want it to happen.

Second, it is no longer controversial that Jews are massively overrepresented among Western elites in politics [9], the media [10], business [11], academia [12], and the professions [13]. Jews are, moreover, among the principal promoters of trends conducive to white genocide, for example: non-white immigration, racial integration, miscegenation, feminism, and sexual liberation. Of course any attempt to blame Jews for white genocide can be hijacked into hairsplitting about historical causation. From a practical point of view, however, it is more important—and less controversial—to note that the organized Jewish community is the linchpin of opposition to nationalist, especially racial nationalist, attempts to rectify these problems going forward. How we got here is ultimately less important than how we can save ourselves. And Jews are blocking the exit.

Now, is it really plausible that the leaders of the Jewish community “know not what they do”? Jews, after all, are the people most aware of the conditions that promote or prevent genocide. Thus Jews support the existence of a Jewish state, Israel, as a refuge from genocide. Yet they oppose any attempt to preserve white homelands for white peoples. Israel is for Jews, but Poland, Sweden, Germany, France, and so forth are for everyone. Jews see intermarriage as a threat to Jewish survival, but they promote miscegenation for other groups and oppose anyone who would ban it. Jews recognize that a strong sense of Jewish identity, including pride in their history and achievements, is necessary for Jewish survival, but they promote multiculturalism and white guilt for the rest of us.

Now, not all Jews promote destructive ideas merely for the goyim while exempting themselves. Jews may promote intermarriage for others, but they practice it as well and at higher rates than other groups [14]. Jews promote feminism to others, but the primary victims of Jewish feminism are the Jewish men who marry these harridans, while other Jewish men marry out to avoid them. Jews promote an ethos of selfishness, individualism, and materialism to others. But they practice it as well, which is one reason why secular Jews have very low reproduction rates [15].

In short, many Jews don’t just preach nihilism, they practice it as well. Unfortunately, because Jews are so influential, they have the power to drag us along in their wake. They are the vanguard of nihilism. They are not hypocrites, preaching nihilism for thee but not for me. But that makes them even more evil, because hypocrisy is the tribute that vice pays to virtue, and they don’t care enough to even offer lip service.

But while some Jews are leading us into extinction, others are goading us from behind but have no intention of sharing in our fate. These are the Jews who praise multiculturalism, open borders, and miscegenation for us, but prefer to opt out because they know that such policies would lead to their extinction.

They aren’t just being “inconsistent” about principles. They are being perfectly consistent with their real principle of collective self-interest. They are not upholding “double standards,” because their single standard is collective self-interest. These Jews have a live and let die philosophy. They seek to profit from our destruction as a people, and they not only promote our decline but actively suppress our resistance to it.

Aside from Jews that are actively pushing and pulling us toward our destruction, there are surely some who are doing neither. Some simply lack the power to do us harm, even if they might want to. Others are entirely ignorant of what their leaders are doing. But one category is conspicuous by its near absence: righteous Jews, i.e., Jews who know white genocide is taking place, who understand their people’s role in it, and who have warned whites and worked to stop it. That relative silence is actually more damning than the never-ending din of anti-white hatred emanating from the Jewish community.

The third and most compelling piece of evidence for white genocide is that people actually say that they support it. The only people who say outright that whites should be exterminated are marginal cranks, like Dr. Kamau Kambon [16], a sometime Black Studies professor and the owner of Blacknificent Books, who declared, “We have to exterminate white people off the face of the planet.”

The subtler advocates of white genocide, like Noel Ignatiev, a Jewish Harvard Ph.D. and the editor of the journal Race Traitor (subtitled Treason to Whiteness is Loyalty to Humanity), speak of “deconstructing” the “concept” of whiteness [17], which sounds like a harmless language game until you grasp that they think race just is a social construct [18]. [19]But the most common advocates of white genocide simply promote race-mixing as a solution to racism. They tacitly agree with White Nationalists that racial diversity within the same system leads to strife, so to eliminate strife, they promote miscegenation to create a homogeneous mongrel race. The most influential advocate of what I call “miscegenationalism” was European unity pioneer Count Richard Coudenhove-Kalergi [20], who was himself of mixed race (his father was white, his mother Japanese). In his book Practical Idealism, he declared:

The man of the future will be of mixed race. Today’s races and classes will gradually disappear owing to the vanishing of space, time, and prejudice. The Eurasian-Negroid race of the future, similar in its appearance to the Ancient Egyptians, will replace the diversity of peoples with a diversity of individuals.

Interestingly enough, Coudenhove-Kalergi did not envision the disappearance of the Jewish people but instead expected them to be the ruling elite of a miscegenated world. (He himself was not Jewish.)

Why is it important to establish that white extinction is actually white genocide? It is easy to understand why people might shy away from such a truth, for it implies that whites are not just the victims of a ghastly mistake, or an impersonal sociopolitical “system,” or an inhuman cosmic or historical destiny, but of knowing malice—of principled enmity—of diabolical evil. It is hard to accept that such evil exists, much less that it wills our annihilation.

But if we are to save ourselves, we have to understand the forces that are arrayed against us. We need to know that our attempts to raise people’s consciousness and win their allegiance will eventually come up against not just ignorance and indifference but diamond hard malice. Eventually we will make all the friends that we can make, persuade all the people we can persuade, and only enemies will remain—enemies that cannot be converted but must simply be defeated.