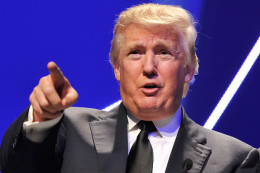 [1]Are the media trying to destroy Donald Trump? His supporters say they are, but there is very little real evidence that this is true. In fact, it is far easier to argue that the mainstream media, and in particular, the televised media are trying to bolster his poll numbers and build him up.

The televised media have provided Trump with far more on-air time than any other candidate, possibly more than all the other candidates put together. His election rally speeches have been shown live by all the mainstream news outlets. Even the buildup to his speeches are shown live along with regular updates on his whereabouts, sightings of his plane, and his estimated times of arrival at different points along his route. He has conducted more than 70 interviews as of this writing, many of them shown in full on prime-time TV, with extracts repeated throughout the day. He is quoted or referenced far more often than his competitors, and he regularly calls into live television news shows to be put on-air to say whatever he wants. Trump may well increase their ratings, but their displaying his every move soap-opera style increases his. Certainly none of the so-called favored candidates can claim such favorable treatment.

The televised media often cites media criticism of Trump, but they don’t appear to offer much themselves, at least not much harsh criticism. They might cite a Politico article ad nauseam claiming that “The south rises for Trump, but only 20,000 of them.” Here they are referring to the 40,000 seater Mobile, Alabama stadium used by Trump in a recent rally with the obvious implication that because he could only fill it to 50 percent of its capacity, he really isn’t that popular. But Politico is not high-profile media, it is not read by Trump supporters or regular voters, it has no impact on them. The TV presenters appear to point out the obvious anti-Trump bias in the Politico report in an effort to rile Trump’s supporters, and in doing so, further endear him to them. In-fact, in contrast to the Politico report, much of the televised media indicated that the number of attendees at the event in Mobile was around 30,000 (citing the Trump campaign) when police and fire officials claim it was 20,000, and photographs of the venue clearly show it to be close to half-full.

Some of the criticism of Trump that does arise in the televised media arises from discussion segments in opinion oriented shows when a Trump supporter is pitted against a detractor, or against a supporter of a rival campaign. By far the most often cited, and perhaps most egregious effort to actually smear Trump so far came during the Fox-News-hosted Republican Candidates debate in Cleveland, Ohio. Fox news anchor Megyn Kelly asked Trump about remarks he had made in the past, remarks which she implied denigrated women. Trump handled the question with some skill to the delight of his supporters in the audience. But this episode is more the exception than the rule, and in any case Megyn soon found herself taking two weeks of paid leave. Maybe she didn’t understand the memo, or maybe the whole thing was a stunt to firmly distinguish Trump as the outsider doing battle with the establishment.

Such tactics have been employed before, most recently in the United Kingdom to aid the rise of the Nigel Farage vehicle the United Kingdom Independence party (UKIP). In the 2015 British parliamentary elections, UKIP got 3.9 million votes or around 13% or the votes cast. In the European Parliamentary elections of 2014, the UKIP vote share was the largest of all parties at 25%. The tendency among Americans on the Right was to view UKIP’s rise as having shocked the establishment, and more specifically, as having caused the mainstream media to go into a frenzy of fear over UKIP’s popularity. It was said that the mainstream media were attacking the party. The Council of Conservative Citizens for example, ran an article entitled “BBC losing it over UKIP” and in the blog under that article appeared strongly endorsed comments like “Maybe there is hope for the British yet. At least this shows that there are some Brits who haven’t been completely brainwashed”.

The truth however is that Nigel Farage is himself a media creation, and in particular a creation of the BBC. Over a four year period leading up to the European Parliamentary elections, British Influence: The campaign to keep Britain in the EU, claims that Farage had appeared on the BBC’s flagship political show “Question Time” 15 times, which is more often than any other guest. Others with Farage’s profile prior to those elections might hope to appear no more than once or twice over the same period. Farage also participated in a number of prime-time televised events including debates against the then deputy Prime Minister, Nick Clegg.

And like the attacks made against Trump, the attacks against Farage appear to have been intentionally designed to endear him more strongly to some segments of the electorate. The media do describe Farage as being far-Right and wanting to scapegoat migrants etc., but they first make sure that he is shown in some sort of favorable light. For example, they might show a picture of him down the pub with a beer, surrounded by a group of ordinary hard-working people. In the eyes of many who read the criticism, he is then cast in the role of a man of the people who is fighting for the people.

The question is, are the media in the United States performing a similar role for Donald Trump? Certainly Trump is not a media creation in the way that Farage was, and the media might not be able to control Trump to the extent they can Farage. But, limited to some extent by the internet, the mainstream media do control what the people see and hear about Trump.

Trump’s historical flip-flopping perhaps exceeds that of any other candidate, but it is essentially down played by the television presenters as opposed to being emphasized; certainly we don’t hear a lot of the “He was for it before he was against it” sort of rhetoric that has dominated much of the negative commentary in previous elections. And no one can claim Trump is being ignored by the media Ron Paul style. In 2012 the media down played Paul’s popularity, often deliberately deleting his name from opinion polls or explicitly failing to report his performance in those polls. If that was the televised media’s tried and tested and successful technique to damage a candidate that was popular with the grass roots, why are they doing the opposite with Trump? Many of the 20,000 people in Mobile who turned out for Trump will be supporters of Confederate America and the Confederate Flag; wall-to-wall looped coverage of Trump’s statement that the flag should be taken down and consigned to a museum might serve to alienate some of them from his campaign, but the televised media just don’t mention it. The media are promoting the flag’s removal like never before, but they just won’t connect Trump to the support he has given them on this issue. Why is that?

One explanation is that they are doing it because they can no longer afford not to. The establishment that drives the changes in society has of late allowed those changes to proceed too quickly, and anyway the cumulative impact of the genocidal policies that have been pursued since the end of the Second World War can no longer be ignored. More of the people who can think for themselves are no longer just contemplating the impact, they are now feeling the impact, and an increasing number of them are being motivated to speak out. And those people who cannot think for themselves are, in increasing numbers, becoming restless. The latter may start to look to the former for explanations, and authentically organic and patriotic movements could rise.

The establishment simply cannot allow that to happen, and so they boost carefully selected people and or movements à la Nigel Farage and UKIP; alternatively they may take advantage of situations that arise unexpectedly such as the resonance of the message of Donald Trump, and instead of carefully selecting a specific individual to further that message, they just boost him. They may or may not be able to control Trump, but they do control his image and can use it to preoccupy the people. And when the danger for the establishment has passed, the media bosses can choose to bump Trump from the TV, in favor of a less erratic candidate.

The real benefit from Trump’s campaign for nationalists is that he has raised the level of the debate on the key issue of immigration; far more people are now talking about immigration, and more are talking about it openly. This statement, despite becoming somewhat clichéd, is ostensibly true; but raising the level of the debate by itself won’t help us, and supporting Trump may in fact present a significant danger for our cause.

Compare what Ronald Reagan promised with what he delivered; more importantly consider what happened to our fortunes when our supporters abandoned us for the promise of Reagan. And in Britain in the late 1970s, the National Front were perhaps set for a political breakthrough in their fight to end and reverse non-white immigration, when Margaret Thatcher stole their thunder by announcing to the electorate that she understood their fear about being “swamped” by the Third World. She captured the imagination of the people and went on to win the election, and the National Front went on to crumble; and when the swamping began and the people turned to the National Front for answers and leadership, it was gone.

Given the near saturation-level coverage, and the generally positive slant Trump is given by the televised media, his popularity with the general public and his apparent invulnerability to criticism is easy to understand. What is troubling, however, is the reaction of many spokesmen and organizational leaders on the Right; like much of the general public, they seem unwilling to take an objective view of Trump and instead seem to have become mesmerized and apparently are willing to follow him Pied-Piper style. These spokesmen and leaders should not forget the lessons alluded to above: That it is far easier for our opponents to capture our support when they appear to share our goals than it is for us to capture their support, and that such an imbalance in the flow of support can have ruinous consequences.

And we must also understand the danger potentially presented by a President Trump. Even if he holds to his word, he doesn’t see the immigration problem as a racial problem; slowing down non-white immigration or changing it from illegal to legal will not change where we are heading. Like in the story of “Boiling the Frog,” this approach will only reduce our vigilance and allow more time for our people to acclimate to the changes that will continue to occur.

The message we should transmit to our spokesmen and organizational leaders is this: Don’t fall into the trap of supporting a candidate and hoping for the best. There are no shortcuts and there is no time to waste. Instead try to tap into the excitement and enthusiasm Trump has generated and use it to drag his supporters our way. To do that his supporters must be engaged; his positions should be analyzed critically and objectively, and their shortcomings pointed out; his motivations should be questioned and his associations scrutinized; his connections to the Jewish elites should be revealed and their importance explained; but above all, his supporters should be told the truth and be introduced to our organizations. Most people won’t listen and some may become hostile, but the minority that can think for itself will listen and many of them may join us. We don’t need a majority to win, minorities always have made the difference.