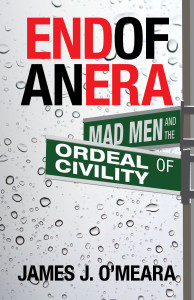 Doing your Christmas shopping early? Here’s a great stocking-stuffer for you: James J. O’Meara’s End of an Era: Mad Men and the Ordeal of Civility. There are other books [3] aimed at Mad Men fans, of course, but it’s a pretty safe bet that your friends and relatives haven’t seen anything that analyzes the Mad Men series at quite this cockeyed angle.

The Mad Men series ran from 2007 to 2015, and for a least half of that run, Mr. O’Meara has sporadically commented on the show, using its story direction as an excuse to carom off into some loosely related social criticism, including such subjects as: haberdashery; the “manspreading” controversy and its connection to the exaltation of the negro and the thug in pop-culture; the strange parallels between Mad Men‘s social dynamics and those of the cult comedy Caddyshack; and the Jews’ use of entryism.

If you’ve read much O’Meara, you know he has his own peculiar manner of critique. Most critics and reviewers give scant attention to the superficial and dive down into the murky heart of a subject (theme? plot? subtext?). But for O’Meara, as for McLuhan, the superficialities are the substance. Suits, haircuts, cigarettes—these are not mere props and decoration gathered in the interest of verisimilitude in order to support the story; they are the story. Much as Andy Warhol’s soup can (to take another bit of 1960s iconography) was not about advertising or soup or the Campbell’s company or the contents of a can; it was merely, and entirely, an exercise in graphic design, an immediately comprehensible symbol of itself.

What this means is that anyone trying to boil down the storylines of Mad Men in order to find something profound and incisive about 1960s society is missing the point entirely. There is a kind of social awareness written into the scripts, yes—a nod here to feminism, a nod there to racial politics—but that’s just more tinsel, artifice, and decoration, with no more deep significance than the ever-shifting tail-fin shapes on early 1960s Cadillacs. Because Mad Men was not really “about the Sixties.” The whole saga was really “about” our recent period 2007-2015, and the peculiar ways we embrace and fetishize certain pop-culture signifiers of the 1960s.

Thus, we begin with a discussion of Mad Men‘s sartorial splendor: how the JFK years were the golden age of the business suit, and how this is a basic theme of the television series, at least in its early seasons. Because for advertising men—or most men who had real jobs in office buildings—the suit was first and foremost a uniform. It signified that a man belonged the club, the cadre, or (one of O’Meara’s favorite words) the Männerbund.

The dissolution of that uniformed cadre—first through the loud, ridiculous paisley-and-bellbottom styles of the “peacock revolution” in the late ’60s and 1970s; then through the rise of workplace slob-culture via academic bohemians, engineering-and-tech workers, and “business-casual” dress rules—is the most immediately noticeable difference between today’s workplace culture and that of a half-century ago.

When the men all wore sharp suits, you could  perceive them as subject to authority and group discipline. Take that uniform away, and the men become mere atomized individuals, shiftless civilians with assorted skills and mismatched clothing. Having no implicitly shared values and esprit de corps, they can’t engage in an easy conversational give-and-take in the workplace. As anyone who’s dwelt in Cubicle Land knows, Cubicle Man’s extracurricular talk is generally restricted to anodyne chat about golf scores, or the leaping negroes he happened to see on the televised basketball court last night. (Cubicle Man doesn’t even get to compete with his peers by showing off trendy, hi-glam fashion, the way his female coworkers do.)

Beyond the fact that the program was a great period fashion show, O’Meara’s attention to the superficial is nicely suited to Mad Men. You can’t subject the storylines or character development to much analysis because—well, basically they’re not very good. By good I mean something that is either (a) original and brilliantly inspired (like the best Hitchcock film scripts, or the whole story arc of Breaking Bad); or (b) something that is authentic: full of period detail, but mainly resounding with the ring of truth and nuanced personal experience.

Mad Men lacked both qualities. It was a clever pastiche that brought nothing new to the table. It was not written by someone who grew up in the ad agencies of the 1960s, but rather by someone who’s seen a lot of television and movies, and probably read a lot of Mad magazine as well. Mad Men may be the most unoriginal cable series ever to have a modicum of success. It is not only a derivative product, it is derivative at a third- or fourth-hand remove.

The atmosphere, the production design, and many of the character details, are copied wholesale from a handful of feature films, which were themselves overstyled and hyperbolic. These include The Man in the Gray Flannel Suit (1956; Gregory Peck as haunted WW2 veteran and rising media executive), North by Northwest (1959; Cary Grant as ad exec mistaken for spy), The Apartment (1959; executive-suite sleaze with Jack Lemmon and Fred MacMurray), and—most notable visually—The Best of Everything, 1960, with Hope Lange, Suzy Parker, Joan Crawford, and Robert Evans in the glamorous jungle of the publishing world. In its women’s-fashion sense and delineation of the well-dressed, well-bred female clerical ghetto, Mad Men owes a magnificent debt to The Best of Everything.

O’Meara intriguingly brings in another filmic source, one that never occurred to me: the 1962 Otto Preminger film Advise and Consent. This has two plot elements that found their way into Mad Men. There is the backstory of a hidden past and potential for blackmail (homosexuality in Advise and Consent, Don Draper’s stolen identity in Mad Men). There is also a suicide by a major character to escape consequences of his deceit and shame (the bisexual senator in the film; the embezzling partner Pryce in the television series).

A Riot of Clichés

I find it significant that neither the series’s creator, Matthew Weiner (born in 1965 and raised in Los Angeles) nor most of its viewers, have a first-hand knowledge of the 1960s. This would not be worth remarking upon if the series were perceived as pure fiction, and had an overall plot-line that stood by itself. But that’s not the case. With its faux-faithfulness to period details, ad campaigns, and social issues, Mad Men was always presented, and accepted, as a kind of historical reenactment. As a result, in the early years of its run its “glamorous” treatment of the 1960s was often treated as a very contentious subject.

“You think it was a great time because of how it’s depicted in Mad Men,” a solemn fool once lectured me in social media, concerning the early 1960s, “but actually it was a time of Great Oppression. Women couldn’t get jobs, African-Americans couldn’t vote or eat at Woolworth’s . . .”

I paraphrase; but so on, so forth. I let Solemn Fool (born circa 1970) natter on with his nonsense because he was a Social Justice Warrior; and I knew that if I brought up a counter-example (Phyllis Schlafly!) he’d blow the top of my head off, remotely.

If you do remember the 1960s, or if you’ve ever wallowed deeply into the social and advertising history of the era, you recognize that Mad Men is a slick and simplified cartoon of the era. If we take it at face value, we are given to understand that there were few Jews in New York ad agencies, and even fewer homosexuals or bohemians. In fact, just about everyone in the big agencies was an Anglo-Saxon male. Mary Wells Lawrence, George Lois, Milton Glaser, and Bill Bernbach just didn’t exist, it would seem.

The Myth of the Excluded Jew is a particularly pervasive folk belief in Judaic America. There is a whole older generation of Jews in New York City who were raised to believe that the New York Athletic Club is “anti-Semitic” because historically this men’s club did not have many Jewish members (because, you see, the NYAC was traditionally mainly Irish-Catholic). You can still hear this odd smear in old Woody Allen jokes [4], circa 1965.

Likewise, the notion that your average New York Jew might be an obtrusive, uncomfortable presence at “white-shoe” companies in the mid-20th century, is hardly an astounding revelation, but we are frequently fed this tale as though it were somehow scandalous. For decades, that late Gore Vidal repeated a fable [5] that told how his Jewish boyfriend, Howard Auster, was turned down for copywriting jobs by every ad agency in New York . . . until one day, in a burst of inspiration, Gore suggested Howard change his surname to Austen. Thus magically transformed, Howard Austen was no longer detectable as a Jewish homosexual from the Bronx . . . and was immediately given a copywriter job at Doyle Dane (((Bernbach)))!

Where Are the Jews?

Given this kind of urban legend, it makes sense that Matthew Weiner and the other Mad Men writers would provide a story arc in which Jews gradually grab a foothold at Sterling Cooper Pryce Draper in the late 1960s. This eventual plot turn is telegraphed from the very first episode (quoted on p. 69 of this volume):

ROGER STERLING: “Have we ever hired a Jew?”

DON DRAPER: “Not on my watch.”

However, Weiner chickens out when it comes to showing the Jews marching into the Sterling Cooper agency and nailing their colors to the mast. Instead, Sterling Cooper is taken over by the giant McCann Erickson, an advertising conglomerate that for some reason is introduced to us as a scrappy, “shirtsleeves” outfit run by Irish Catholics.

The only conceivable rationale for depicting McCann Erickson this way is that Weiner is using “Irish” as a kind of proxy for “Jewish,” surely one of the most bizarre and unlikely equations a television writer, even a Jewish one, could ever make. Irish? Why not “Scots”? Or “Dutch,” perhaps? (For that matter, how does a tough-looking customer like Don Draper, as played by Jon Hamm, with his permanent Fred Flintstone beard shadow, pass himself off as a slick, high-class gent?)

It is obvious that Weiner and company have a great deal of discomfort in presenting Jewish characters qua Jews. The only distinctly Jewish character I recall from the series is a retail client named Rachel Menken, whom Don Draper takes under his wing (and to bed) for the sheer novelty of it all. I understand there is also a copywriter named Ginsberg whom I somehow missed; he goes completely looneytunes, mutilates himself, and is borne away from Sterling Cooper on a stretcher.

Otherwise Matthew Weiner’s 1960s New York advertising scene is an oddly white, Christian place, as pristine as the backlot America that L. B. Mayer set up for Andy Hardy and Betsy Booth.

I highly recommend End of an Era. Furthermore, it’s a nice slim volume with a lovely jacket design, one of the most striking yet from the Counter-Currents imprint. Even if your giftees are appalled when they discover that this deceptively friendly cover conceals a collection of dense, transgressive semiotic criticism (and no photographs from the television series!), they’ll still keep the book out on view . . . just because it looks so nice.