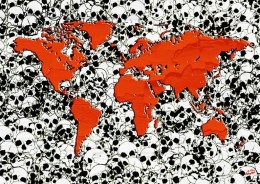 Since the beginning of the summer of 2015, Europe has experienced an unprecedented and ever-increasing wave of illegal migration, on top of the already massive immigration of recent decades. This migration is basically an invasion and quite simply imperils our civilization, along with the cluelessness and complicity of our pseudo-political and media elites, which are anti-democratic and completely cut off from the interests and opinions of European peoples. This is the first of a three-part analysis. (The second part of this article will be called “The Suicidal Capitulation of Europe” and the third “For Strong Medicine.”)

The Causes of the Deluge

The wave of “migrants” (it is an understatement to call them “illegal”), which passes through the open doors of a Europe under helpless and incompetent leaders, comes mainly from the Middle East (Iraq and Syria) through Turkey (an accomplice); it enters by Greece and the Balkans. Second entrance: the Mediterranean, mainly from a Libya in chaos. Part of the invasive flow is composed of refugees from Syria and Iraq fleeing the barbarism of the Islamic State (ISIS) or others fleeing tribal and religious wars in Somalia or elsewhere; but I daresay these are in the minority. Indeed, taking advantage of this windfall and rushing into the breach are legions of often bogus refugees and asylum seekers, who for economic reasons wish to settle in Europe. They come from black Africa, the Maghreb, and the Middle East, attracted by three elements:

1. The permeability of the Schengen area and the lack of protection of “common borders”; the EU is the only political space in the world without protected borders; every day European marines give assistance to boat people rather than repel them (humanitarian ideology), which acts as a suction pump. They are an aid to the invasion rather than protection from it. Never before seen in history: the armed forces aiding the invader. Insane.

2. Second suction pump: grants, assistance, benefits, and allowances offered to illegals upon arriving in several European countries, including France. At the expense of the natives, including the poor, who do not get these privileges! Preference for foreigners . . . It’s parasitism and extorted charity from people unable to take charge of their own country.

3. Third suction pump: intruders know that it is almost impossible to expel them, and the authorities (plus a part of public opinion and media) are rotted by bad conscience, guilt, compassion paralysis. The invaders calculate that we will never dare to drive them back by force. Hence, as seen in Calais and elsewhere and recently in the riots in the Balkans, the incredible impudence and audacity all the way to violence. “Migrants,” animated by a sense of impunity, arrogate all rights, including the right to invade us “from below.”

The maudlin weakness of European leaders, their delusional devotion to “human rights,” their dogmatic and xenophile “anti-racism” excite the aggressiveness of “migrants” entering by force. We have convinced them that they have an inalienable right to take “refuge” in our homes, and hold on to them. They obviously do not even dare to argue with Israel, Russia, Australia, or the United States!

Measuring the Extent of the Invasion

The numbers are staggering. Already, France takes 200,000 legal immigrants every year. So that’s two million since 2005, which have remained and reproduced. Added to this are the poorly documented and inexpulsable illegals, and now new waves of “migrants.”

In Greece alone, 230,000 illegal immigrants forced their way through the Aegean Sea from January to July, against 17,500 for the same period in 2014. They fanned out over Northern and Western Europe. In Italy, since January 2015, 115,000 illegal immigrants have landed. In all, over 300,000 boat people crossed the Mediterranean since then, loaded to the gills.

There has been an explosion of asylum applications from January to June 2015 in the European Union (not including previous applications not yet investigated): 417,000 applicants already in force (by land or sea) including 172,000 in Germany and over 32,000 in France. They are in addition to 65,000 asylum seekers that France records each year. In proportion to their population, the most affected countries, in addition to these last two, are Sweden, Austria, Belgium, the Netherlands, and Hungary. Even if rejected, a tiny minority of applicants will be expelled. Furthermore, many do not even bother to apply for asylum! They are not counted. This shows the magnitude and speed of the invasion.

From Syria alone, asylum applications since April 2011 amounted to 99,000 in Germany and 65,000 for little Sweden! Despite the enormous problems (security, crime, preservation of lifestyle, welfare costs etc.) that the eastern Arab-African immigration poses to this once peaceful country, its leaders prefer humanitarian dogmatism, sacrificing the long-term identity of its people.

In total, Germany has blithely allowed 800,000 “refugee migrants” in 2015, in addition to the existing flow of illegal and legal immigrants. A large increase is expected in 2016. France, according to the French Association of Judges of Asylum, in 2016 will soon pass 100,000 to 120,000 refugee claimants per year, in addition to other arrivals, legal and illegal. This will cost 500 to 600 million more per year. According to the Court of Auditors, asylum already costs two billion euros per year to our indebted countries; but these people, true and false refugees, are a priority for the oligarchy and the dominant ideology over the “marginal French” who are dispossessed and needy. Our Belgian cousins ​​are in the same situation with a political and media oligarchy that is exactly the same.

The Law of Numbers

In all cases, the disorder endemic in the Muslim world, exacerbated by the stupid and disastrous American and Franco-British interventions (“to establish democracy”) in Iraq and Libya, is causing the exodus. But this unprecedented migratory invasion, which is 80% Muslim, is also part of a strategy (organized by ISIS and Erdogan’s Turkey) to conquer Europe by Islam. Invasive war from the bottom and by cunning, by moral disarmament.

The 64% of the French opposed to hosting the new migration wave are cynically mocked by our leaders. The humanitarian argument that blames us for ​​boat people drowning at sea to force us to welcome them appears to many as aberrant hypocrisy because if they had been discouraged from immigrating, and if their smugglers were punished, nobody would be drowning or dead in refrigerated trucks or anywhere else. They would stay home.

This “electric shock of migratory invasion,” in the politically incorrect formula of Ivan Rioufol (Le Figaro, September 4, 2015) that would have been impossible to use only a short while ago in a major newspaper, can perhaps lead to a revolt of European nations, but maybe not; and this could lead to fundamentally questioning the architecture and functioning of the European Union, that misguided idea, that solar ideal that has become a lunar utopia.

In any case, if this migratory invasion, which started slowly in the 1970s and vertiginously accelerated (geometric progression) since then, continues for ten more years, the European nations of the West and North (including France and Germany), with their declining birth rates, will simply disappear in two or three generations, at the end of this century. Washed away by the relentless demographic law, overwhelmed by the sheer number of alien genes, evacuees from history.

Currently, since 2011, between one and two million “immigrants” have entered Northern and Western Europe each year, under the most diverse headings: refugees, legal, and illegal. The majority are Muslim. They add to those already present, and their reproductive rate is more than double that of Europeans. A simple mathematical calculation can predict the future, if an urgent reversal is not carried out.

We shall see in the next article how the German government of Angela Merkel is playing a very stupid and short-sighted game, slavishly followed by Mr. Hollande, and how the European political and media oligarchy, our dominant minority, is complicit in the invasion and in blaming us.