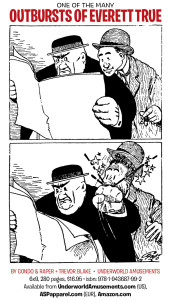 There are many things about Chicago of which I am not proud: our glum acceptance of the ten percent sales tax; liberal North Siders’ wheedling attempts to be “down” with the South Side (while avoiding that part of Chiraq out of pure self-preservation [3]); or our continual reelection of machine politicians, including the current dirty habit of repeatedly voting for Mayor Rahm Emmanuel’s repugnant smirk.

They don’t take care of business—they kick off needless hostility. New Yorker assholes start fights. Chicago assholes finish them. Only a nitwit [4] mistakes Midwestern “nice” for a gullibility that goes bone deep. Trust us, you don’t want to know what’s under the affable veneer. But even some Midwesterners are stupid enough to keep needling till they find out . . . and how [5].

Drawn in lurid, cartoon-realist strokes by A. D. Condo and J. W. Raper during the opening acts of the 20th century—you know: the 100 years during which the dignity culture evaporated [6] like a fond dream—the Everett True character was a larger-than life bully-killer.