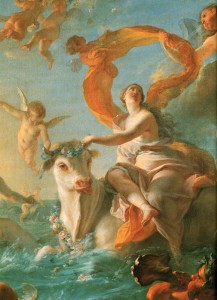 In the days of European power, Christianity (of all faiths) had not proven a break on the rise of the most aggressive nationalist passions. On the contrary, it had accompanied them, each national clergy letting itself become swept up in the general movement of the day, each being convinced of having God on its side (Gott mit uns). It is only after the tragic European decline following the Second World War that emerged the harmful part of the spirit of guilt and compassion inherent to Christian culture. This then revealed itself unsuited to supporting Europeans against a challenge which it even contributed to amplifying.

As a warlike nationalism dominated Europe between 1914 and 1945, alongside communist internationalism, this period was characterized by the fading away of European consciousness, the consciousness of being part of a specific human family, bearing a unique civilization. [. . . ] Voltaire, [. . .] like the European elites of his day, was imbued by this consciousness. This remained alive throughout the next century, as Victor Hugo and Nietzsche proved. It was still visible at the beginning of the twentieth century. But the nationalist conflagrations of 1914 made this feeling of Europeanness disappear for three decades. In France, reacting against the fratricidal killings of 1914-18, several writers however expressed their hope in a European unity. They belonged to the entire political spectrum of their time: the far-left with Romain Rolland, the left with Jules Romains, the center with Paul Valéry, the monarchist right with Georges Bernanos, and the fascistic far-right with Pierre Drieu la Rochelle.[1] One of the earliest was Romain Rolland. During the conflict of 1914, this future fellow traveler of the Communist Party expressed indignation in his Diary against France and England’s recruiting Africans or Asians against other European nations.

Paradoxically, during the following conflict, a certain European consciousness awakened in several countries subjected to German occupation after the Reich’s launching the war against the USSR, on June 22, 1941. From this event onwards, the conflict, indeed, changed in nature. In France and elsewhere, among those who saw in communism the threat of a new barbarism, the temptation was great to let one be taken in by the spell of the “crusade” against Bolshevism.[2]

The Reich’s propaganda of course sought to transform German soldiers into valiant knights and crusaders. After the disaster of Stalingrad, their stature only grew in proportion with their defeats and the unbelievable battles fought in the Russian winter, sometimes outnumbered ten-to-one. The admiration felt by some Frenchmen for the desperate courage of the German fighters slowly turned into a sentimental Germanophilia. We find the trace of this sentiment right up the last speech made by President François Mitterrand as head of state, in Berlin, on the fiftieth anniversary of the German surrender of May 8, 1945: “I have not come to celebrate the victory for which I rejoiced for my country in 1945. I have not come to emphasize the defeat because I know what there was of strong in the German people, its virtue, its courage . . . And the uniform and even the idea which inhabited these soldiers is of little importance to me. They were brave. They accepted to lose their lives. For a bad cause, but they loved their fatherland . . .”

What the president said, many French veterans of the two wars could have said as well. Despite the horrors and uncertainties of the moment, the idea of a European reconciliation acquired a force which it had never had in the past. We saw French nationalists raised in the hatred of the “Boche” forgetting their chauvinism and building friendship with the German people. Despite Hitler, enclosed in his pan-Germanism and his violence, we also saw the same emerge among some Germans who were not all Ernst Jünger.[3]

3. That is, pro-French sentiment among Germans less well-known than Ernst Jünger. – Translator