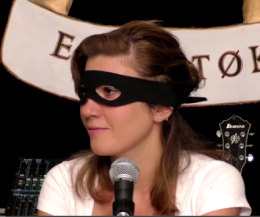 [1]A revolutionary movement seeking to destroy the current system and replace it with something better must contain within it both destructive and creative forces. In “How Traditional Catholics are Taking Back the Visual Culture of France [2],” I featured a vital, masculine cadre which destroyed the Piss Christ and the Christmas Buttplug. Shortly after this was posted, the opposite side of that coin manifested itself in an all-female group of Nationalists, Traditionalist Catholics musicians, Les Brigandes.

Unfortunately, my favorite song has not been translated into English, “Bing! Bang! Bong! [3],” which is about how they want to beat up each of the leaders of the Socialist and Center Right Party who will likely run in the next Presidential election. The other standout when it comes to choreography is their disco-inspired criticism of Pope Francis and the Jesuit Order, “Le Rat Jèze [4],” but you would need a highly detailed familiarity with the Jesuits to understand all of their historical references.