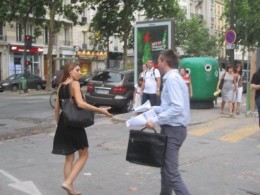 The Identitarians are leading the intellectual work to prepare a moral and legal framework to begin Remigration. This brochure is by far the best political pamphlet I have ever seen. It lives up to the great pamphlets of the past in that it makes the revolution seem possible. I hope that readers in other countries can borrow and adapt some of the points to their own countries and convince their countrymen that “these measures are at once possible and necessary.”

The Socialist government has proposed their “paper on the road to a policy for equality and integration.”

The Bloc Identitaire has decided to respond to this umpteenth provocation by proposing this “sheet on the road to a policy of Identity and Remigration” including 26 measures (covering culture, economy, education and institutional reform) looking forward to ending uncontrolled immigration and replanting immigrants in their country of origin.

Far from the fantasies of “reconciliation” or massive assimilation, we think that the only way to avoid chaos that fatally springs forth from multicultural (and therefore “multiconflictual”) societies is to proceed to remigration, in a peaceful and organized fashion, that is to say the return of a majority of extra-European immigrants from our territory to their countries of origin.

Stop immigration, condemn those who encourage it, stop Islamization, organize remigration with the countries of origin, etc.

The Bloc Identitaire simply proclaims that the French have the same fundamental right as any other people around the world: that is to live in peace, in their homeland, according to their Identity, with other people like themselves. If today, these measures seem “impossible” or “radical” to some, we are persuaded that the time to come will take care of that and make these measure at once possible and necessary.