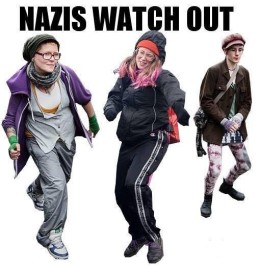 More violent, even: we have privilege-screeching rich girls [2] throwing beer bottles at Roosh V. for exercising what’s left of the right to free speech in Canada.

And more disgusting: period-blood art used to be confined to awful modern-art museums, but now we’ve got the outdoor attention whore [3] who ran a marathon with no tampon in. Part of me suspects this little stunt started as a laundry detergent commercial that the sponsor backed out of when they saw just how repulsive the brackish bodily fluids looked on television.