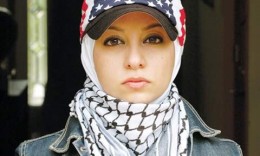 Daughters of the Holy Land 5 Prisoners, casualties of Israeli-American Lawfare, continue to agitate for their fathers’ release.

Other lawfare methods go beyond producing mere propaganda impact. The concept of “universal jurisdiction” can be the most powerful tool in the hands of a politically motivated judge. This is the concept that crimes which are so heinous as to rise to the level of Genocide or Crimes against Humanity, among others, are no longer limited to being within the purview of the jurisdiction of where the event happened (even if all of the victims and perpetrators were citizens of that foreign jurisdiction) and graduate to a level where any state or international body can prosecute the accused.

While the Organized Jewish Community would like to refer to the Nuremberg Trials as the first example of universal jurisdiction, this is up for debate, since the court was acting under the jurisdiction of the Government of Germany under the control of the Allied Control Council. However, the case of Adolf Eichmann is a clear case of universal jurisdiction because the citizenship and residence of the accused, the citizenship of the victims, and the alleged crime all fell outside of the State of Israel (which of course did not exist at the time and did not consider itself to have an immediate predecessor state).

Every American who is concerned about the role of Muslim NGOs in the US has heard about this trial. It is the foundation for every conspiracy about Muslim infiltration. You can listen to hours of Frank Gaffney [4] of the Center for Security Policy building an argument based on linking “Unindicted Co-Conspirators” to the Muslim Brotherhood’s international plot without once hearing about the reason for this trial. Until preparing this article, this author was under the impression that the trial was a National Security case brought by the State Department.

Here is the opening paragraph of the case summary [5] before the Seventh Circuit Court of Appeals:

In 1996 David Boim, a Jewish teenager who was both an Israeli citizen and an American citizen, living in Israel, was shot to death by two men at a bus stop near Jerusalem. His parents filed this suit four years later, alleging that his killers had been Hamas gunmen and naming as defendants Muhammad Salah plus three organizations: the Holy Land Foundation for Relief and Development, the American Muslim Society, and the Quranic Literacy Institute. . . . The complaint accused the defendants of having provided financial support to Hamas before David Boim’s death and by doing so of having violated 18 U.S.C. 5 2333(a), which provides that “any national of the United States injured in his or her person, property, or business by reason of an act of inter-national terrorism, or his or her estate, survivors, or heirs, may sue therefor in any appropriate district court of the United States and shall recover threefold the damages he or she sustains and the cost of the suit, including attorney’s fees.”

The family of this murdered teenager was seeking damages, and since Hamas could not be brought into court they tried to draw a link between American charities and Hamas social programs. The American courts defer to the moral clarity offered by those “Lights unto the Nations,” thus buying a bag of rice for hungry Palestinians is the moral equivalent of shooting a teenager, once that rice is scooped into bowls by nonviolent civilian volunteers linked with Hamas. Ghassan Elashi (R) Born in Gaza in 1953, he was educated in Egypt and created the first Arabic computer. He was the head of the Holy Land Foundation and is serving a 65 year sentence. His daughter Noor works tireslessly for his early release.

According to an article appearing on the ADL’s website written in 1996 (the year David Boim was murdered) “Its budget has been estimated at between $40-70 million and 85 percent of it reportedly comes from abroad; the remaining 15 percent is raised among Palestinians in the West Bank and Gaza” and “95 percent of Hamas’ budget is believed to finance its social service activities.”[1] The Holy Land Foundation was the largest Islamic charity in the US at the time and donated funds for “food, clothing, shelter, and medical supplies.”

Considering the state of Gaza’s economy under siege, they must raise money from abroad. This is not so different from the dozens, if not hundreds, of social programs in the “Startup Nation” of Israel which depend on foreign donations that are filtered through a government that fights wars of aggression and regularly cluster bombs civilian areas. In addition to the three charities listed above, numerous other groups were swept up in the dragnet of “unindicted co-conspirators.”

Somehow, the prosecutorial resources and government collusion was so massive, that each of these charities underwent massive scrutiny which uncovered illegal accounting and wire transfers and, among a several individuals unrelated to the Holy Land 5, subversive intentions. The Holy Land Foundation, America’s largest Islamic Charity, had, knowingly or unknowingly, donated $12 million to Hamas-linked organizations over the course of its existence. The parents of David Boim were awarded $156 million. I’ll resist the temptation to make cheap jokes here to stay on task. The New York Times [7] was apparently too embarrassed to include many important details of this trial in their summary. As Hamas is on the US State Department’s list of Foreign Terrorist Organizations [8], five leaders in the Holy Land Foundation were given decades-long sentences. This is despite patently anti-constitutional aspects of the trial in which two key witnesses (allegedly Israeli Intelligence Officers) anonymously offered hearsay evidence essential to conviction. In response to the secret trials of the British Courts, America’s Founders guaranteed the right to face one’s accusers in court. It should come as no surprise to Counter-Currents readers that such rules are sacred when it’s good for the Jews and open to interpretation when the Chosen People need a bit of flexibility.

As with the illustrations of Lawfare earlier in this article, the outcome of the trial was not the most important part of this event from the point of view of the attackers. This case has become a stick used by Jewish Neo-Cons and cuckservatives like Louis Gomert with which to beat all of Muslim civil society. There is no major Islamic organization which was not an “unindicted co-conspirator,” and many records from the trial have been sealed due to the libelous and sloppy accusations contained therein; however, the masses paying attention think this was a National Security case and naturally conclude that these records were sealed because of political correctness and the US government’s weakness in the face of radical Islamists. This leads many Americans with good values and instincts (but who are horribly misinformed) to conclude, “if only we could have leaders like Netanyahu.”

The Palestinians and their Leftist Allies Respond

Since the Holy Land Foundation case, Palestinian and far-Left organizations like the Palestinian Center for Human Rights (PCHR) and the Center for Constitutional Rights (CCR) have made more use of universal jurisdiction than their Zionist opponents, and the cases they have brought have been much more straightforward. Israeli officials routinely make policy decisions that fall afoul of established international norms for the rules of war. Thus around a dozen senior Israeli civilian and military leaders have been indicted in courts in Spain and the UK on criminal charges and for damages in US civil courts. The result has been serious travel restrictions on the accused. For example, a case was filed against Doron Almog while the former general was flying on El Al to London for a charity fundraiser. He had previously committed War Crimes by destroying dozens of civilian homes in the Rafah Refugee Camp. The PCHR led this lawfare attack and succeeded in getting an arrest warrant while he was in the air. Almog was tipped off and never exited the plane, returning to Israel without entering UK jurisdiction. This same tool has been used against Donald Rumsfeld and Henry Kissinger. The threat of indictment has seriously impacted Henry Kissinger’s travels in Europe and his work as a leading globalist and political consultant.

The CCR has had two minor victories in the US. The first was against retired Brig. General Moshe Yaron, who was Sharon’s fall guy during the domestic investigation into the Sabra and Shatila Massacre. He was later appointed as the Israeli Military Attaché to the US and Canada in the Israeli Embassy in Washington D.C. The CCR tried to challenge his accreditation with the US government, but this fell on deaf ears. They then filed a lawsuit (led by the great anti-colonialist lawyer Francis Boyle [10]) for damages against survivors now living in the US. They launched a public information campaign which successfully lobbied Canada to not accredit him. Continued pressure in the US led to Yaron’s removal from the post. (Details in minutes 6:35-11:15 [11])

The similarly named Moshe Ya’alon was for a time a Fellow at the Washington Institute after being the Chief of Staff of the IDF and before that Chief of Military Intelligence. A case brought by the CCR related to the Qana Massacre, in which Ya’alon’s units forced civilians into a UN compound before shelling it. The shelling continued long after the military was informed that this was a UN compound (which was already known to the IDF). Over 100 people died. EU and UN official inquests have found this to be intentional (not negligent!) behavior. The case forced Ya’alon to flee potential justice and abandon his post at the Washington Institute. (Details in minutes 11:35-15:34 [11])

Several years ago, Shimon Peres made the rounds to the various ZOGs of Europe to get changes in their universal jurisdiction standards which are “good for the Jews.” For whatever reason, these European leaders decided their need for “Bilateral Strategic Relations” with Israel were more important than their commitment to Human Rights. Perhaps only those in the room during these discussions are aware of what kind of pressure was put on these European Heads of State. This Al Jazeera segment sums up the politicization and cancellation of strong universal jurisdiction statutes.

The Israeli stands out as sticking to rehearsed talking points in this clip. The specifics of the new agreements are beyond this author’s understanding of International Law. Nonetheless, while some of the tactics used by the PCHR have been neutered, it is certain that there remain many avenues and opportunities for White Nationalist lawfare in Europe and in the US. Some of these will be explored in Part 3 of this article.