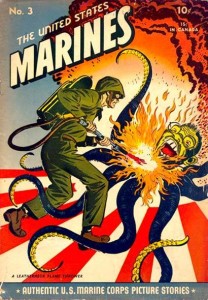 None suffered more in war, none suffered more in “peace,” than German women and girls. Of all the war crimes committed by the Allies during World War Two, the massive rapes of helpless women and children were perhaps the most monstrous. Of course, an untold number of German women and children did not survive the violent, nonstop assaults. One million? Two million? Ten million? Since no one in power cared, no one was counting.

And as this monstrous crime was enveloping the women of Europe, a similar spiritual slaughter was transpiring in Asia.

Because the great bulk of fighting in the war against Japan was fought on the water, in the air, or across islands either uninhabited or sparsely populated, rape is a word seldom mentioned in American war diaries or official reports during the years 1941-1944. When US forces invaded the Japanese island of Okinawa, however, this changed. Almost immediately, and in spite of the bloody fighting, US soldiers began the sexual assault on the females of the island. In one prefecture alone, during a ten-day period, over one thousand women reported being raped. Since most victims would never come forward and voluntarily suffer such shame in a society where modesty and chastity were prized above all else, the number of rapes was undoubtedly much greater than reported.

Marching south, men of the 4th Marines passed a group of some 10 American soldiers bunched together in a tight circle next to the road. They were “quite animated,” noted a corporal who assumed they were playing a game of craps. “Then as we passed them,” said the shocked marine, “I could see they were taking turns raping an oriental woman. I was furious, but our outfit kept marching by as though nothing unusual was going on.”

So pervasive was the crime, and so frightened were the people, that hundreds of Okinawa women committed suicide by swallowing poison or by leaping from the steep cliffs of the island. [2]With their nation’s surrender in August, 1945, Japanese officials were so concerned about the mass rape of their wives and daughters by the victors that they rounded up tens of thousands of girls from poorer families throughout the nation and all but forced them into prostitution at various brothels, or “comfort stations.” Although such stop-gap measures did prevent wholesale rape on a German scale, this was small consolation to the women and children who had to endure the sanctioned sex attacks. Earning anywhere from eight cents to a dollar a day, a girl working in the “rape stations,” as they more commonly were called, might be brutally raped and sodomized from 15 to 60 times a days.

“They took my clothes off,” remembered one little girl. “I was so small, they were so big, they raped me easily. I was bleeding, I was only 14. I can smell the men. I hate men.”

Despite hundreds of thousands of American and Australian occupation soldiers using the rape stations, thousands more preferred taking their sex violently. In the days, weeks and months after the surrender, numerous atrocities were committed as the victors laid claim to the “spoils of war.” [3]In the Spring of 1946, American GI’s cut the phone lines in Nagoya and raped every women they could get their hands on, including children as young as ten. At another city, US soldiers broke into a hospital and spent their time raping over 70 women, including one who had just given birth. The mother’s infant was flung to the floor and killed.

Had Allied occupation commander, Gen. Douglas MacArthur, spent even half the time on stemming rape as he spent censoring news from Japan or running down real or imagined Japanese war criminals, the attacks would have been curtailed. But, like his opposite in Europe, Gen. Eisenhower, he did not.

Once you recognize that soldiers rape — including “our” guys, our fathers, uncles, grandfathers, sons, husbands, boyfriends, grandsons — then you understand the tremendous resistance [by authorities] to recognizing mass rapes during wartime as the atrocity it has always been and still is.

When it comes to propaganda, we suspected our enemies of it, but we never figured we were using propaganda. We felt like our country was too honest to use propaganda on us, and we honestly were not conscious that they were.

So wrote Katharine Phillips, an American Red Cross worker during World War Two. Hardly concealed in Katherine’s words written long after the war, is the fear, the dread fear, that perhaps the inhuman evil that her generation was told to hate a thousand times over during four years of war may not have been so evil or so inhuman after all. Just as with every other war known to man, World War Two had also been a war of words, a war of poisonous words; a war of deceit, treachery, hate, and lies in which trusting, unsuspecting people were lashed once again into a frenzy of murderous madness by outrageously vicious and vile propaganda. True, some angry words are perhaps needed in times of war to awaken and impassion the laggards among us to work and slave like ants to win such a contest; but equally true, some of that same propaganda, in the hands of evil men behind desks far removed from danger, contribute to outright murder of the most heartless and cold-blooded kind, encourage rape on a massive, historical scale, add to the agonizing death by fire of uncounted millions of women and children, and engender enough hate, misery and pain to make a planet groan. [4]For many, like Katherine, it took years before they came to realize that the very people they had been programmed to despise, dehumanize and ultimately exterminate like vermin were but after all, very frail, very frightened, very human, and finally . . . were very much like themselves. For a fortunate few, however, even in the midst of the terrible inferno itself, reality sometimes shattered the hate-filled propaganda unexpectedly.

The sudden re-humanization of the Japanese came as a shock to some. While sifting through a blackened, blown-out cave on Iwo Jima, one marine was “horrified” when he discovered some childish and brightly-colored paintings strewn among the wreckage. After poring over the art work, the soldier was stunned.

“The Japanese soldiers had children . . . who loved them and sent their art work to them,” the incredulous marine suddenly realized, just as American children would send pretty pictures to their equally proud fathers.

Rummaging through pockets of the fallen enemy, other Americans were startled when they found newspaper clippings of baseball teams back home in Japan, just as any normal American soldier would carry; or they discovered inside enemy helmets photos of beautiful Japanese movie stars just as many US marines folded pin-ups of Betty Grable or Rita Hayworth in theirs; or they unwrapped delicate letters from home with pictures of girl friends inside, or they stumbled upon a torn photo amid the debris of battle of a now-dead soldier laughing and rolling on the ground with puppies in his back yard back home. For some Americans, the abrupt realization that there were more similarities between them and their enemy than not was life-altering.

Occasionally, in even more startling ways, the realization of shared humanity came when a dead soldier’s diary was discovered:

Sept. 30 1942 (still on Guadalcanal) We took a short rest in the grove, when we found a figure of a man in a bush. Had he escaped from a crashing plane or infiltrated from the sea? Two or three soldiers chased and caught him after five min or so. He was a young American soldier.

He got a bayonet cut on his forehead and was bleeding. He sat down on the ground leaning on coconut trunks and had his hands tied behind his back. He looked thin, unshaven and wore a waterproofing overcoat.

He pleaded with me to help him, ‘General, Help me! ‘General, Help me!’ He thought I was senior and an officer of higher rank. In the rain, I stood hesitant about what to do with this American soldier. It was impossible for me to set him free. We couldn’t take him with my party. . . . We had not roughed him up after capturing him, but the moment I had deported him, the men of the HQ treated him violently. I thought later I should have released him.

I regretted what I had done to him. He didn’t make me feel any hatred as an enemy. It was a strange feeling for me. He looked quite young and mild-mannered, and didn’t look strong or ferocious at all. He was gentle but fully composed and never disgraced himself. I can’t say what befell this young soldier. I am sure he was not a soldier who would easily leak out a military secret. And I am afraid he never returned to his camp. [5]With the dawn of peace, men and women of good will finally found the strength and courage to revisit the awful crucible they had recently escaped from. Some, in shame, cast off the old prejudice and hate that they once had so eagerly embraced, and seek a reckoning, an new and honest understanding of the past that they had played a part in.

Such was the case of Edgar Jones. A veteran himself, first in Europe, then in the Pacific, Jones struggled mightily to make sense of the many senseless things he had seen, heard and perhaps even done. When he was through, when he truly understood what had occurred, the veteran exploded in anger . . . and honesty.

We Americans have the dangerous tendency in our international thinking to take a holier-than-thou attitude toward other nations. We consider ourselves to be more noble and decent than other peoples, and consequently in a better position to decide what is right and wrong in the world. What kind of war do civilians suppose we fought, anyway? We shot prisoners in cold blood, wiped out hospitals, strafed lifeboats, killed or mistreated enemy civilians, finished off the enemy wounded, tossed the dying into a hole with the dead, and in the Pacific boiled the flesh off enemy skulls to make table ornaments for sweethearts, or carved their bones into letter openers. . . . [W]e mutilated the bodies of enemy dead, cutting off their ears and kicking out their gold teeth for souvenirs, and buried them with their testicles in their mouths. . . . We topped off our saturation bombing and burning of enemy civilians by dropping atomic bombs on two nearly defenseless cities, thereby setting an all-time record for instantaneous mass slaughter.

As victors we are privileged to try our defeated opponents for their crimes against humanity; but we should be realistic enough to appreciate that if we were on trial for breaking international laws, we should be found guilty on a dozen counts. We fought a dishonorable war, because morality had a low priority in battle. The tougher the fighting, the less room for decency, and in Pacific contests we saw mankind reach the blackest depths of bestiality.

Fortunately, the passionate, heartfelt words of Edgar Jones now speak for millions more around the globe. Alas, if only such words as his could be emblazoned across the sky in fiery letters before each and every rush to war and before each and every “holy crusade” to slaughter an “inhuman” enemy, then certainly the world would be a better place because of it.