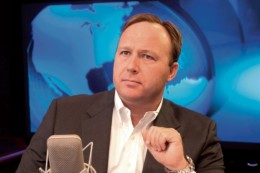 For years Alex Jones has been criticized as a kosher spin artist who jumps through hoops to avoid talking about Zionism and Jewish power. He and his alt-media outfit Infowars has, since its inception, served to misdirect the sheeple into a myriad of dead-ends.

Jones’ modus operandi has always been to evoke elusive and shadowy phantoms to throw people off the trail of the Zionists.

Finally, to his credit, Jones went out on a limb and had David Duke, a veritable expert on the “Jewish question,” on his show. They went at it for more than two hours.

This show was more of an extended David Duke monologue than a real debate. Throughout the interview/debate, Jones said basically nothing to counter Duke on any point, and just kept repeating the platitude that “Jews are a diverse people” who are not monolithic.

Even that claim is false. Jews may differ with each other on inconsequential issues that have no real effect on the group’s overall well-being and status in society, and they do from time to time engage in infighting among their own. But when push comes to shove, all but a tiny handful of principled Jews – most of whom call themselves ‘ex’ Jews – side with their tribe and its corrupt leadership against the collective enemy who the rabbis have taught them to fear and hate, the Goyim.

Even among the Jewish leadership there is disagreement, but only on the methods and strategies used to subjugate the Goyim, not on the ultimate end goal of global Jewish hegemony as prophesied in Jewish religious texts.

Now, while Duke clearly has a superior position to that of Jones, that is not to say that he doesn’t have shortcomings of his own. Critics could argue that Duke is engaged in one-track thinking where he searches out the Jewish factor in every issue, while downplaying and neglecting all other dynamics. Granted, Duke does do this. His characterization of all non-Jews involved in globalist institutions like the Federal Reserve, the CFR, the Bilderberg Group, etc., as well as in government and media power positions, as mere screens or front-men for Jews is somewhat simplistic, and errs on the side of being a reverse apologist for Gentile criminals.

Obviously not all wars and conflicts on earth have been started by Jews. Obviously not all corruption and evil in the world emanates from Jews. However, as Duke successfully argues on the show, Jewish supremacists are disproportionately powerful and have been the leading element behind a significant amount of corruption, wrongdoing and malfeasance, particularly over the past few centuries, and that should be open for discussion.

At the end of the interview Duke is challenged by one of Jones’ Jewish staff members Rob Jacobsen. Jacobsen’s retort to Duke’s naming and shaming of powerful Jews was to highlight the founding members of the US Federal Reserve Bank, a key globalist institution. Of the six founders (Nelson Aldrich; A. Piatt Andrew; Frank Vanderlip; Henry P. Norton; Paul Warburg; Benjamin Strong), only one, Paul Warburg, was Jewish. The rest are of Anglo stock.

This is a fair point. Clearly not every nefarious deed in history has been the sole calculation of Jews.

Duke’s position is that Jews sit atop the global financial and political power structure, and that the influential Gentiles involved are traitorous puppets. This is true to some extent, but Duke downplays the historic alliance between Jews and the Anglo-Saxons of England. Jewish banking dynasties and individual financiers made England their home base, and over the centuries began intermarrying with the British Gentile aristocracy. This is documented quite well in the book Warwolves of the Iron Cross: Albion and Zion United, edited and published by Veronica Clark. Prevailing English supremacist attitudes of the era were, in a sense, steered by Jewish supremacist financiers like Rothschild and Montiefore to secure resources and markets around the globe under the mandate of the British Empire. The Rothschild/Sassoon-inspired Opium Wars and the Rothschild/Oppenheimer/De Beers-driven South African gambit are two major examples of this phenomenon.

This Anglo-Jewish alliance seems to form the basis of today’s current Anglo-American-Israel nexus of power. It is the Anglo-derived countries (Britain, USA, Canada, New Zealand, Australia, South Africa under apartheid) that have been and are today the staunchest collaborators with and proponents and facilitators of Zionism and Jewish power in the world. Some of this cooperation stems from the legacy of Christian Zionism and British Israelite ideology. Like the Jewish supremacists, Anglo supremacists like Cecil Rhodes believed that the Albionist people were ‘chosen’ by God to inherit the earth. Writing in his last will and testament, Rhodes said of the English race:

I contend that we [the English] are the finest race in the world and that the more of the world we inhabit the better it is for the human race. Just fancy those parts that are at present inhabited by the most despicable specimens of human beings what an alteration there would be if they were brought under Anglo-Saxon influence… Why should we not form a secret society with but one object the furtherance of the British Empire and the bringing of the whole uncivilised world under British rule for the recovery of the United States for the making the Anglo-Saxon race but one Empire.

These twin supremacist ideologies, Anglo and Judaic, form the crux of what Duke calls the ‘Zio Matrix of Power.’ Alex Jones’ impetus is to ignore the prominent and perhaps dominant role that Jews play in that equation and only focus on the Anglo Gentile element. He descends further into la-la land by promulgating phony Nazi conspiracies at every turn. He assuredly does this deliberately.

So, in a sense Duke is right that Jews are largely administrators on the global power hierarchy, but he is wrong to not include the Anglos as willing collaborators in this quest for global Anglo-Jewish hegemony. It could be argued that, since the fall of the British Empire, the prevailing Jewish-Zionist element has thrown their Anglo henchmen under the bus in pursuit of other agendas, but that does not negate the prominent Anglo contribution to many of these nefarious globalist and imperialist schemes, including establishing the Federal Reserve Bank in 1913 which appears to have been a joint Anglo-Jewish venture.

Another criticism leveled against those who promote the strictly Jewish conspiracy is that they sometimes engage in sloppy research and unempirical argumentation. For instance, they will label anyone in a position of influence with a remotely Jewish-sounding name a Jew without any real research or documentation to back it. This methodology is flawed because Jewish-sounding names that end in Stein, Rosen, Berg, etc., are of German origin. For example, the chief ideologue for the Nazis was a man named Alfred Rosenberg. Was he Jewish? On top of that, Jews often adopt Gentile names so it’s sometimes impossible to tell from the name alone. Moreover, they’ll assume that any Jew in any position of power is working for the larger Jewish interest, when that is not always the case, and certainly requires additional evidence. Even David Duke, who is usually more scholarly than your average Internet sleuth, engages in some of this.

Kevin Macdonald’s scholarly, empirical approach to demonstrating what constitutes a “Jewish” movement as opposed to a movement that has some individual Jews in it warrants more praise than the lackluster guesswork of Internet-based pundits.

As far as what David Duke proffered on the Alex Jones show, even if only 50% of what he said about Jewish-Zionist intrigue is true, that is bad enough. It is the unreserved hypocrisy emanating from Organized Jewry, their holier-than-thou attitude and their attempts to scuttle open debate about these issues that irks me more than anything.

Obviously not all Jews are “bad” and not all of the world’s problems can be laid at their feet. But with that said, it must be recognized that powerful Jews who adhere to a supremacist and messianic ideology have played a significant role in creating and exacerbating many terrible calamities throughout history in pursuit of their own sectarian ends. And they continue to occupy a large seat, if not the largest seat, at the table of world power.