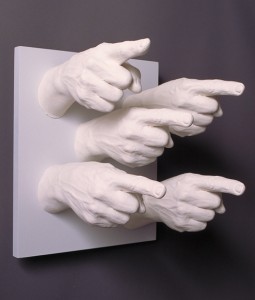 I have tried all my life to define myself as American. Until recently, I’ve never said “I’m a white man.” I’ve never said “it’s us versus them.” I’ve never said “we are superior to them.” I’ve never said “the problem is the blacks.” I’ve told my kids “We are Americans, a Christian family.” That’s how I have defined us. Not white. American and my family name. And my religion does not encourage me to have a racial identity: the apostle Paul wrote that there “is no Greek or Jew, slave or free,” but all are one in Christ Jesus. Nice thoughts — but not reality, otherwise Paul would not have made the point.

“American” was such a nice, traditional, safe, and realistic way to think of myself. But my eyes have opened up.

“They” have identified me (straight white American male) as the enemy. They have made this division. I am not American to them, just “white.” The hatred in graduate school was particularly acute for straight white Christian males — that hatred has been mainstreamed. Whites submit because they’ve accepted the guilt of racism, sexism, homophobia, and on and on. Enough.

We have a president that defines himself by his color more than his country. We have a cohort of race baiters who will not fail to point out every possible or improbable grievance and blame it on whites.

For generations Marxist university professors have defined European men as the enemy, and it has become mainstream. White people, white history, white culture are accused of all the problems of non-whites and non-males. Over the last four years I’ve woken up to the idea that I didn’t get a vote on how they define me.

University professors invented new unforgivable sins that can only be committed by their enemies (Men are sexist, whites are racists, straights are homophobic, and now Christians are Islamophobic). What a bunch of fools we’ve been to accept these academically acceptable four letters words, confessing to false sins for which there is no forgiveness except submission. To have a chance at redemption one must become fanatically obsessed with proving a negative: “I’m not racist, see, I voted for Obama!”

I had a beautiful black woman once say years ago (she was a Human Resources officer) that it was OK to hate other races, just don’t bring it to work. Her counterpart, a white man, could not say enough to denounce thoughts of racial differences on pain of firing — “zero tolerance” was his mantra. Any hint of aberrant speech would result in immediate termination. But it was OK for non-whites to have their private race-based “associations” at work and meet on company time to advance their racial agenda. But not for people like me.

The power of guilt manipulation is not just about blacks and whites; it’s about about global economic rebalancing, open borders, gay marriage, and eliminating Christian influence. It is anti-rational and anti-intellectual. It is a crude, but effective power game, and we are losing. Badly.

I refuse to buy into white guilt. That’s not for me. And it’s not for my children. If the white people wake up to this nonsense it will all be over. Speech codes are designed to prevent an intellectual and political awakening. Speech codes take entire areas of political debate off the table: “you can’t say that, it’s racist,” and that stops any talk of border control. “You can’t say that, it’s homophobic,” and there goes any conversation on gay marriage or gay Boy Scouts.

My days of innocence and naivety are gone because it’s become painfully apparent that there is no point at which they will be satisfied — there is no neutral ground, there are no boundaries, there are no lines that won’t be crossed. It is war against who I am; it won’t stop until one of us is dead, and we aren’t winning.

This does not make me happy. We have worked in this country for a long time to get over our racial differences, but the race manipulators have found a tool that gives them money and power, and they aren’t going to let it go. This does not bode well for the future.

The “so what” about racial identity is something we haven’t quite caught on to. I was of the opinion, like most whites I suspect, to let them have a little power, let them feel like they have a voice, let the vent some steam — “we’re big boys and we can take it.” But there is no point at which it will be “enough.” Already you risk your job to read something like this at work. Go ahead — print this out and pass it around to your colleagues. See how fast this gets you an EEO complaint. Are you a professor that hasn’t swallowed the poison of self-hatred? Why don’t you get up and say something like this in your lectures? Are you student? Why don’t you wear a T-Shirt with the American flag on it on Cinco de Mayo or with a quote from the Bill of Rights on it? Because you risk losing your job is why, or getting kicked out of school. You are a fool to think this will stop by letting it run its course.

If you are a Christian and believe in the Gospel how can you preach the forgiveness of sins when there is no sin? What was once good is now evil (straight marriages, a bunch of children, strong male role models, and the preaching of the Gospel) and what was once evil (homosexuality, riots, dependency on welfare, and emasculation a la Bruce Jenner ) is now good. Do you really think it’s going to stop here? They are just getting started — we are heading into a new dark age of totalitarianism and oppression. Time to intellectually rearm and defend ourselves from lies and manipulation. That’s where I’m coming from.

There is no peace without victory. Some hope that by shutting up and getting along they can all get by. Maybe they can. Maybe they don’t have anything worth fighting for. Maybe nothing is real to them. Maybe they have enough to get by on. I won’t go that way — and I won’t set that example for my children.

I’ll leave with with a quote from a black man of a century ago. I point out that it is a black man because race means so much to our politicians and to our secular religious leaders (university professors are the prophets and priests of our civilization):

There is another class of coloured people who make a business of keeping the troubles, the wrongs, and the hardships of the Negro race before the public. Having learned that they are able to make a living out of their troubles, they have grown into the settled habit of advertising their wrongs — partly because they want sympathy and partly because it pays. Some of these people do not want the Negro to lose his grievances, because they do not want to lose their jobs.