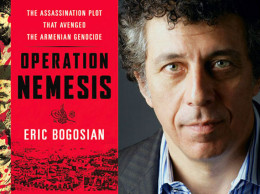 For years I have been waiting for a book on Operation Nemesis, the secret Armenian organization that in 1921 and 1922 assassinated virtually the entire leadership of the deposed and exiled Young Turk regime for being the architects of the Armenian genocide. Thus I was delighted that Eric Bogosian’s Operation Nemesis was published this spring to coincide with the 100th anniversary of the beginning of the Armenian genocide, on April 24, 1915.

The Armenians are an ancient Near Eastern Caucasoid people, closely related genetically to Kurds, Georgians, and other peoples of Upper Mesopotamia, Eastern Anatolia, and the Caucasus. Like the Persians, as well as the ancient Hittites and Mittanians, Armenians speak an Indo-European language. The Armenians are probably a continuation of the kingdom or Urartu, which appears in Assyrian chronicles in the 13th-century BC. Because of its location between larger empires to the East and West, Armenia frequently lost its independence, but often regained it by serving as a buffer state between its larger rivals. In 301, Armenia became the first Christian kingdom. In 1071, Armenia was conquered by the Seljuk Turks. From 1198 to 1375, an Armenian kingdom existed in Cilicia but fell to the Egyptian Mameluks. Eventually, all of Armenia was absorbed by the Ottoman and Persian Empires

In 1915, about 3 million Armenians lived in the Ottoman Empire, most of them in the ancestral Armenian homeland in Eastern Anatolia. (Persian Armenia had been absorbed by the Russian Empire.) During the 19th century, the Ottomans had an “Armenian Question”: As one Christian land after another threw off the Ottoman yoke — Greece, Romania, Serbia, Bulgaria, etc. — and the Russian Empire encroached on Ottoman territory, the Sultans naturally regarded the rising national consciousness of the Armenians with some anxiety. They were a populous, ancient Christian people, solidly entrenched in the Ottoman heartland, in the upper and middle classes of the empire, and even in the Ottoman bureaucracy. The personal fortune of the Sultans, for instance, was traditionally managed by an Armenian. (Armenians played similar roles in the Byzantine Empire. Indeed, many Byzantine Emperors were ethnically Armenian.)

In 1894-’96, the “Red Sultan” Abdul Hamid II, who was under Western pressure to give greater autonomy to Armenians, launched a series of massacres in which 80,000 to 300,000 Armenians were killed. This naturally gave rise to an armed Armenian resistance movement, which killed Turkish leaders and Armenian collaborators and almost blew up the Sultan himself on July 21, 1905 [4]. When Abdul Hamid was removed from power in the July 1908 Young Turk Revolution, Armenians and other oppressed minorities were elated.

The Young Turks, however, inherited the Ottoman Armenian Question. They wished not only to preserve but expand the Ottoman Empire to include all Tukic peoples across Central Asia to the borders of China, and an independent Armenia would have blocked this Ostpolitik. So, under cover of the night and fog of the First World War, the Young Turks hatched a plan to exterminate the Armenians and other Christian minorities in the East, including Greeks [5] and Assyrians [6]. (A minor flaw of Bogosian’s book is that he does not place the Armenian genocide in the context of a wider policy of exterminating Christian minorities.)

Christian soldiers — who, thanks to their new constitutional equal rights, could now serve in the military — were disarmed and put in work battalions, after which they were worked to death or slaughtered outright. On April 24, 1915, the Armenian community was decapitated. Some 250 prominent Armenians in Constantinople were arrested and subsequently murdered. In the Armenian homelands in the East, the genocide took place under the pretext of deportation and resettlement. Armenians packed and cataloged their valuables, handed over assets, and were marched out of their towns, where they were plundered and massacred, often with sickening Oriental sadism. Those who were not killed outright were marched to desert internment camps where they perished through disease, hunger, and violence. Between 800,000 and 1.4 million Armenians died, as well as more than half a million Greeks and Assyrians. Hundreds of thousands became refugees. By the end of the war, the Ottoman Empire had virtually eliminated its Armenian population.

In 1918, after the fall of the Russian Empire, Russian Armenia became the first sovereign Armenian state since 1375, but in late 1920, it was conquered by the Red Army and incorporated into the Soviet Union. On August 23, 1990, Armenia seceded from the Soviet Union. Modern Armenia is but a sliver of the Greater Armenia of old. Its population stands at just under three million, and another seven million Armenians live in a diaspora around the world, the largest populations being in Russia, the United States, France, Georgia, and Iran.

At the end of World War I, Constantinople was occupied by the British, who wished to try the Young Turk leadership for war crimes, including the Armenian genocide. Before they could stand trial, however, they fled the country. Thus they were tried in absentia, and five were sentenced to death: the Three Pashas, Talat Pasha (Interior Minister and later Grand Vizier), Enver Pasha (Minister of War), and Djemal Pasha (Minister of the Navy), as well as Dr. Mehmet Nazim and Dr. Behaeddin Shakir, the leaders of the Special Organization that coordinated and executed the genocide.

As the Paris Peace Conference dragged on and the Allies dithered about their plans for Turkey, General Mustapha Kemal, the hero of Gallipoli, rallied Turkish forces in Anatolia and began its reconquest from British, French, and Italian occupiers, Armenian guerrillas, and Greek invaders and insurgents. In the meantime, the Young Turk leaders, exiled in Berlin, Rome, Moscow, and elsewhere, plotted their return to power.

The Armenian exiles, however, had other plans. A small group of Armenian businessmen, intellectuals, ex-diplomats, and guerrilla fighters came together to form Operation Nemesis, as it was christened in Boston on July 8, 1920 at the 27th Regional Conference of the Armenian Revolutionary Association. Operation Nemesis was funded primarily by Armenian-American businessmen and based in the United States.

Although the primary purpose of Operation Nemesis was to assassinate both the Turkish architects and the Armenian collaborators responsible for the genocide, it did, in fact, mark the emergence of a new leadership caste for a nation that — save for the small, embattled, and doomed Armenian Republic — was decapitated and stateless. Operation Nemesis performed the function of a sovereign as defined by Carl Schmitt: Standing above all human laws and institutions, in the space opened up by the existential clash between two peoples, it made life and death decisions to preserve a people facing the ultimate emergency, genocide. In Bogosian’s words, “. . .  Operation Nemesis did what governments could not. They were appealing to a higher, final justice. One that exists somewhere between heaven and earth” (p. 302).

The assassinations served several purposes: for the dead, vengeance; for the living, the well-needed feeling of winning a round; for the enemy, a warning; for the world, an occasion to learn of the plight of the Armenian people.

The first assassination was of Talat Pasha in Berlin, on March 15, 1921, by Soghomon Tehlirian. His mission was not merely to kill Talat but to stand trial for his murder and use it as a platform to tell the world about the Armenian genocide. As Bogosian demonstrates, to protect the operation, Tehlirian claimed he acted alone and perjured himself extensively about the details of his life and travels. But the core of his testimony was true, and he very successfully publicized the plight of the Armenians to the world. Astonishingly, Tehlirian was acquitted.

Nemesis also assassinated Djemal Pasha. The third Pasha, Enver, escaped Operation Nemesis. A longtime collaborator with the Soviets, they killed him on August 4, 1922 after he raised an army against them in Central Asia. Other Nemesis victims were Said Halim Pasha, a former Grand Vizier; Behbud Khan Javanshir, Minister of Interior of Azerbaijan, who presided over massacres of Armenians in Baku; Cemal Azmi, Governor of Trebizond, who massacred the local Armenian community; and Dr. Behaeddin Shakir, one of the leaders of the Special Organization. The other Special Organization leader, Dr. Mehmet Nazim, escaped Operation Nemesis and eventually returned to Turkey, where in 1926 he was tried and hanged for plotting to assassinate Mustapha Kemal, now known as Ataturk, the father of modern Turkey.

Decades after the end of Operation Nemesis, the story slowly surfaced as the various conspirators published their memoirs. We can thank Eric Bogosian, the Armenian-American author of Operation Nemesis, for surveying these obscure sources, including Armenian-language ones, and synthesizing them masterfully, with a dramatist’s eye for detail. Bogosian is a novelist and playwright, but he is probably best known as an actor. (He did four seasons of Law and Order: Criminal Intent as Captain Danny Ross.) Generally, his flair for drama serves him well, but I found his account of Sogomon Tehlirian’s life and trial overly detailed and somewhat draggy.

The Armenian genocide illustrates the necessity of ethnonationalism, for stateless peoples are far more likely to be victimized than peoples with their own sovereign homelands. Bogosian, being a typical liberal, indicts Turkish nationalism for the genocide, but the problem was Turkish imperialism. The underlying problem was too few nation-states rather than too many.

Operation Nemesis itself illustrates how a decapitated and stateless people can form a leadership caste, capable of exercising sovereign functions. Indeed, Operation Nemesis was what Turks today call a “deep state” apparatus, namely an organization that operates outside of a state and its laws, performing sovereign acts to preserve the state — or, in this case, a people — in an existential crisis in which the state cannot protect them, or when there is no state to protect them.

I highly recommend Operation Nemesis, not just as a historical study but as food for political thought.