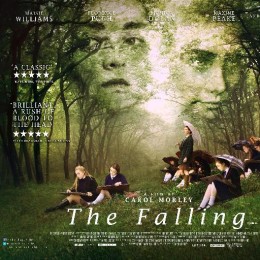 [1]Watching Carol Morley’s new film, The Falling [2], I found myself wondering, slightly obsessively, exactly which year it was set in. I settled on 1970 because the visual cues in the home of the main character, Lydia, suggested that strange point in time where hallucinatory sixties psychedelia ossified into lurid home furnishings. Subsequent googling revealed that it was set in 1969. That it was possible for the film to communicate its period to within a year (without any help from contemporary songs on the soundtrack) is a testament both to the early seventies’ distinctive character and the film’s brilliant depiction of it.

The Falling tells the tale of an outbreak of fainting fits that spreads through a girls’ school in England. Co-funded by the British Film Institute and the BBC there is a reasonable expectation that the film will be hampered by its budget and by the persistent tendency for English filmmaking to feel indebted to its elder sibling, the theatre. The Falling turns both of these weaknesses into strengths by limiting its exterior filming to a small pond and oak tree in the school grounds. The intensity with which these outdoor scenes are filmed is such that the vivid green and golden hues become semi-hallucinatory, and the landscape is suffused with a deeply colourful tinge. This creates an almost fairy tale-like register that gives the film an allegorical feel and sets the tone for a story that prioritises the perspective of the child.

1969 was also the year in which another classic English film, Withnail & I, was set. Withnail was very much about the end of the sixties and it looked back on that decade as a closed chapter. As drug dealer Danny remarks, “They’re selling Beatles wigs in Woolworths, man. The greatest decade in the history of mankind is over.” The Falling feels much more like a film that is looking forward to the seventies and it seems to recognise the genuinely Scarfolk [3]-inflected character of that decade. Indeed, Scarfolk derives much of its humour from staying quite faithful to some of the more bizarre elements of 1970s culture. It was a decade when a slew of magazines and TV programmes sought to popularise the occult and supernatural, and when it seemed perfectly natural for children’s TV and literature to be dominated by themes of folk horror.

The Falling picks up this thread in the figure of Lydia’s brother, Kenneth. He performs magick (“with a ‘k'”) spells and talks about John Michell and ley lines. None of this seems to manifest itself in terms of great personal power, though. He still lives at home with his mother and seems to expend much of his energy in working his way through Lydia’s school friends (and then Lydia herself) in a sordid, priapic odyssey. Like most people, he seems to latch on to occult ideas as a way of boosting his image, of appearing more exciting than he really is.

He stands in contrast to his sister. Lydia is shown to have an intense, semi-sexualised relationship with her best friend, Abbie. When Abbie dies unexpectedly after a series of fainting fits, Lydia spontaneously begins to have fainting fits accompanied with strangely ritualistic gestures. Soon, this bizarre behavior spreads throughout the school in a peculiarly passive sort of instinctive rebellion, one which seems connected to the girls’ growing awareness of their incipient sexual power. Menarche in the UK, perhaps?

The fainting epidemic seems to take on a sort of cultish character as it becomes a battle of wills between Lydia and the school’s headmistress. The crux of the matter revolves around whether this is a genuine phenomenon as Lydia insists, or just girls acting up as the headmistress believes.

So, whereas Kenneth is interested in studying a codified, systemic sort of magick, his sister is manifesting a purely instinctual form of sorcery, one based on a trance-like, almost shamanic loss of consciousness, part St. Vitus Dance, part mass hysteria. Some have referred to such female sorcery as muliebral magic and it’s no coincidence that the moon looms large throughout The Falling.

As the epidemic spreads throughout the school even one of the teachers starts to suffer from fainting fits. The fact that she is close to the school girls in age is certainly relevant to her becoming susceptible to this shared phenomenon. Interestingly enough, one of the girls in Lydia’s circle of friends, Titch, is Indian and she is immune to the spread of fainting. It’s a curious thing for the filmmaker to do because it would seem to suggest that she is excluded from their shared “hysteria” due to her different background. Whereas the teacher who does succumb to the fainting epidemic is sufficiently similar to the girls that she cannot help but participate in it. Almost as though their racial heritage is essential to their shared psychic reality. Now, such a reading would surely not be one that was intended by the filmmaker, but it is a curious detail to include. Titch is the only non-white character in the film so what we see is an all-English (so, all-white) cast with a single non-white character who is shown not to belong in a significant sense. Again, it can hardly be the case that the filmmaker intended for it to appear in this way but it does point to the peculiarly schizophrenic character of those who are interested in this sort of hauntological, folk horror art. On the one hand, they like to look back to a particular time in English history that can now seem naïve or innocent; on the other, they like to apply a politically deconstructive critique to such notions of Englishness. It’s the nostalgia that dare not speak its name.

The film concludes with a revelation about one of the characters that seems out of place with what has gone before. It does nothing to add to the power or atmosphere of this strange and affecting film but then neither does it detract much either.

The Falling is a highly ambiguous film. Many reviews have chosen to focus on the sense of repression that is evident in a single sex school from that time period. This angle seems to me to be very much a part of the general deconstructivist tendency just mentioned, and it’s an aspect of the film that doesn’t interest me much. The strength of this film lies in the fact that it can be subjected to numerous competing readings, all of which are plausible. As an allegorical tale its power lies in its autonomy, in its ability to depict a world of hidden meanings but without disclosing exactly what those meanings are. It is destined to wax in influence in the coming years.