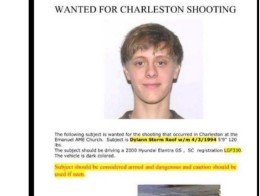 Have you ever walked through your neighborhood, or through the hallways of your high school and envisioned yourself pumping round after round of ammunition into your “peers,” targeting those who constantly harass or poke fun at you?

Most of you would definitely answer that question with a resounding NO! and I don’t blame you. I wouldn’t actually do something like that myself, because I am a level-headed individual. Although I have to admit, I have thought about it. Rage makes people think terrible things, but sanity keeps us from acting on them.

And as crazy as this might sound, I am not at all surprised by Dylan Roof’s actions.

While I was growing up in a working-class area of my city, everyone in the neighborhood knew my name, the names of everyone in my family, and vice versa. Looking back, it reminds me of that old phrase, “It takes a village to raise a child,” and how true it actually was for me, my sisters, and the other neighborhood kids. We ran barefoot in the streets, rode bikes, and played stick-ball until the street lights came on. As I got a bit older I noticed that the younger kids never played outside without parental supervision, bikes were never left unlocked, as they were when I was younger. Something had changed.

Our community became culturally and racially “enriched.” Bikes being stolen was just the calm before the storm. Fights were more frequent and drugs became more accessible. Before this time I remember when every summer we held a neighborhood carnival to commemorate the end of the school year. But like many things I cherished from my childhood, those carnivals no longer exist.

After the enriching, these carnivals became the place for fights. And every single time the combatants were one race vs. another, like the Jets and the Sharks, I kid you not. After much tension and many fights, there was this one incident that had finally escalated to a shooting, something that would have been unheard of before the racial integration of Juniata Park. After that, the carnival — and the cohesive white community — was history.

You can trust that watching the place you grew-up in turn into a crime-ridden society will drive you crazy. Especially when you are reminded of how thankful you should be to have the “opportunity” to now live in a world filled with diversity.

Soon after, my family and I moved into another area. Not far, just one zip-code away. Not a much “better” (read: financially more well-off) neighborhood, or anything, because that’s all my family could afford.

When we left, it was because we told ourselves the neighborhood was getting “bad.” Upon reflection, we always denied the role that race was playing in a neighborhood “getting bad”; as if it just magically happened, and no one could understand how or why, because, after all, diversity is a good thing. Right?

This is obviously a touchy subject for me personally, but enough talk about me. That is to say that, based on my experiences, I can understand why Dylan “the reckoning” Roof freaked out. Do not think I condone it. If you do, maybe you should stop reading.

Whenever someone commits a heinous crime, such as murdering innocent people, everyone is appalled, myself included. It’s as if there is some universal truth attached to our morals, wherein it is always wrong when innocent people are killed in cold blood.

But like all murder cases, there are shades of gray, especially when the judge and jury are trying to determine the motive of some crime, i.e. if the crime was premeditated or committed as a crime of passion. To this end, each comes with a different prison sentence and moral attachment. Depending on the circumstances, some murders are seen as justifiable in the eyes of the public who may have see the case on TV, or read about the details in the newspapers. So what about Dylan Roof?

Before you jump to conclusions and accuse me of being morally repugnant, be sure that I am not trying to defend Dylan Roof’s actions or claim they were justified. What I am saying, at least from one man’s perspective, is that they were understandable.

I understand his anger and resentment.

I understand how he felt alone, and how being alienated can cause someone, who may not be mentally altogether, to lash-out in ways most decent people, in a decent society, could never fathom.

But, wait, doesn’t this then raise the question “do we even live in a decent society?” Is it decent to ignore countless black on white murders, rapes, and other general violent crimes, all in order to maintain a politically correct narrative? Is it decent for the media to go to great lengths to exclusively portray minorities as constant victims of white oppression?

Dylan Roof is undoubtedly guilty of a heinous and unforgivable act. But I would like to boldly state that his accomplice is every facet of the mainstream media; and if you ask me, they are almost as guilty as he is.

How much longer will the majority of whites in America — the ones who can not afford to live in any area other than the “culturally enriched” — be pushed around by policy makers who use them as lab rats in their “cultural” experiment for “public” good? How long will they sit and watch their neighborhoods turn into Third World, crime-ridden slums, right before their eyes, and say nothing? How long will it take for the “backpack of white privilege” to weigh so heavily that it begins to send its wearers into great rage, anger, and frustration?

And isn’t history supposed to be our greatest teacher? Yet no one wants to admit that Dylan Roof is now part of our collective history and memory. The only way to avoid another Dylan Roof episode from airing on network TV is if we finally start learning from (y)our mistakes.

I honestly believe that Dylan Roof’s actions should be heeded as a warning. A warning to the current establishment; a warning to those who wish to maintain the status quo.

What warning is that, you ask? Either embrace the truth and put an end to your relentless critique and attack on White Americans, their history, and their culture, or feel the backlash of those with backpacks becoming to heavy to carry without complaint. To either grant white Americans the same privileges that are afforded to minorities of all stripes, or accept the consequences of which history has written, and the television narrated.

Now back to your regularly scheduled programming . . .