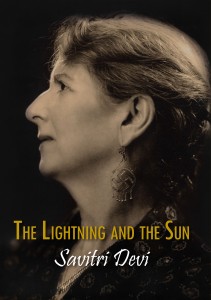 If Savitri Devi’s The Lightning and the Sun isn’t the most controversial book of the twentieth century then it must surely come close. Long regarded as an almost sacred text of Esoteric Hitlerism, it has nevertheless been mostly read in a drastically expurgated version. Now, at long last, this important text can be studied in full in this new scholarly edition published by Counter-Currents and edited by R. G. Fowler, who has done more than anyone else to make widely available the writings of this most original thinker.

The first edition of The Lightning and the Sun was published in 1958 and was reprinted by Ernst Zündel in an edition that is itself now rare. The version that most people will be familiar with is the abridged edition published by William Pierce in 1966 and reprinted by Kerry Bolton’s Renaissance Press in 1994. This abridgment cuts out two thirds of the original text and so, in the words of R. G. Fowler, “cannot be regarded as one of [Savitri’s] works” (p. vii). The present edition restores the complete text whilst removing Zündel’s editorial additions.

The Lightning and the Sun is a complex work relating to the progression of the ages, or Yugas. In the long-forgotten Golden Age (Satya Yuga) there is no possibility of violence because all life exists in its correct position within a cosmic hierarchy. As the world moves away from this age, the ancient truths are gradually forgotten and the inevitability of conflict arises because there is no longer consensus about the cosmic order of the universe. The present Dark Age (Kali Yuga) is a period during which the world hurtles towards its ultimate nadir, a time when all ancient truths are forgotten and man-centered doctrines (rather than life-centered teachings) are ubiquitous.

According to Savitri, each of the great men who emerge during the Dark Age (which lasts for thousands of years) is compelled to make a choice. He can recognize the necessity of violence in this Dark Age and accept its use in the creation and expansion of his imperial adventures; or he can turn his face away from the disintegrating world, renounce violence, and live according to Golden Age principles. The former is the man in time whose symbol is lightning, the latter the man above time whose symbol is the sun. In The Lightning and the Sun Savitri devotes one section to Genghis Khan as the exemplary man in time, and another to the Egyptian Pharaoh Akhnaton as the exemplary man above time.

Genghis Khan is said to be a man in time because he works with the flow of history. That is to say, he accepts and utilizes the tools of the Dark Age for his own ends. He is a swift and destructive force of nature who instinctively understands that the descent of the world into more and more violent conflict is an inevitable process that cannot be thwarted but can be turned to one’s own advantage. He founded an empire based on the primacy of the Golden Family, i.e. his own family. His achievement was in the creation of an unrivaled empire that was founded, not on any religious or ideological precepts, but on the imperative to conquer. Savitri sketches Genghis Khan’s career as a predestined cosmic event.

Akhnaton was, like Jesus, a man above time. His entire being was oriented towards the sun in a powerful form of metaphysical photosynthesis. He refused to accept the Dark Age necessity of violence and he rejected all forms of compromise with the fallen world. But, uniquely for a man above time, he did not become a lone voice preaching from the wilderness. Instead, he instigated his new (yet ancient) sun cult as the state religion. He would not renounce this world as such; rather he attempted to impose a new Golden Age upon it. Savitri shows brilliantly how the young Pharaoh’s idealistic project was doomed to fail. His principles, being as they were Golden Age principles, would not allow him to support the military maneuvers that were necessary to protect his kingdom from external threats. He attempted to build a Golden Age state in the midst of the Dark Age and the inevitability of its failure is charted here in all its cosmic tragedy.

Thus far, The Lightning and the Sun would make for a very interesting theological interpretation of historical events. But it is the final section that gives this book its notoriety. Here, Savitri describes Adolf Hitler as the pre-eminent man against time.

The argument follows on logically from what went before. Hitler attempted to create, through the National Socialist state, a new hierarchical order in harmony with cosmic principles. He employed Dark Age means in pursuit of Golden Age ends. Unlike Genghis Khan, he was not seeking to conquer for the sake of conquest; he had a very definite program that he wanted to implement. But, unlike Akhnaton, he was not naïve about what was necessary in order to achieve this. In this sense he represented both lightning and sun.

Furthermore, Savitri believes that Hitler was always pre-destined to be defeated. This is because he was the one who comes before the last man against time. The final man against time will be an incarnation of the god, Kalki who will destroy the Dark Age world in order to build a new Golden Age.

What is so interesting about The Lightning and the Sun is not so much the defiant National Socialism of the author as the almost mythopoeic conception of history that is presented here. The cyclic progression of the ages is a familiar theme in Traditionalist literature and in Eastern religions but rarely, if ever, has it been interpreted in such astonishing terms as in this book. The internal consistency and detail of the worldview that Savitri presents is so convincing that her arguments have an almost irresistible power. Only on reflection does it all seem very strange. Perhaps this is a consequence of being a reader whose unspoken assumptions derive from Western conceptions of linear time and from post-Christian secularism.

Savitri’s great achievement is to present a compelling historical scheme wherein all of life exists in a hierarchical spectrum following cosmic laws. This rather Occidental view of life, which rejects the notion that man is existentially distinct from other animals, was argued for in John Gray’s very popular philosophy book, Straw Dogs, so it’s a notion that certainly has some purchase on the Western mind. Savitri’s insistence on the cosmic greatness of the twentieth century’s man against time will ensure that The Lightning and the Sun will never achieve the popularity of Gray’s book but her views of Hitler and National Socialism are far from bombastic afterthoughts to her overall philosophy. And her arguments, if they are to be disputed, deserve a considered, serious rebuttal.

With its elegant design, meticulous editing, and extremely detailed index, Counter-Currents Publishing’s edition of The Lightning and the Sun will remain the definitive edition at least until the end of the Dark Age. It is the most important statement of Savitri Devi’s thought, and it will be an essential purchase for any scholar of the far Right as well as for anyone with an interest in Traditionalism or other radical religious thought.