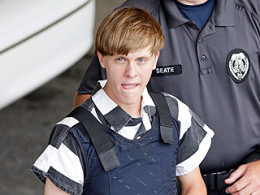 [1]It’s interesting to note that, following the shooting of a number of Black churchgoers and their minister by Dylann Storm Roof, a young man apparently motivated by a sense of racial revenge, the Liberal Left is not calling for the abolition or racism but instead is focusing its wan energies on the banning of guns.

The first article I saw, following this act of violence, was this one by the Guardian’s token Black writer Gary Younge: “Charleston church shooting: Without gun control, racism will keep killing black people [2].”

Racism isn’t dead. We know this because it keeps killing black people.

America does not have a monopoly on racism. But what makes its racism so lethal is the ease with which people can acquire guns.

Notice the glaring, reality-free assumption that racism only ever kills Black people and never the other way round. But just as important is the unwitting assumption in the article’s headline that the way to go is to abolish guns, not racism, even if all they mean by that term is White racism. This is actually not Younge’s view as he correctly remains entirely cynical about America ever banning guns, but it is the main position being taken by the Left in America, as revealed by the comments [3] of America’s own lame duck Black President:

Now is the time for mourning and for healing. But let’s be clear. At some point, we as a country will have to reckon with the fact that this type of mass violence does not happen in other advanced countries. It doesn’t happen in other places with this kind of frequency. And it is in our power to do something about it. I say that recognizing the politics in this town foreclose a lot of those avenues right now. But it’d be wrong for us not to acknowledge it, and at some point, it’s going to [be] important for the American to come to grips with it, and for us to be able to shift how we think about the issue of gun violence collectively. (italics added)

Liberals and Leftists are well-known for their love of unrealistic panaceas and utopias. Indeed, that was the reason many of them voted for Obama in the first place, motivated by the hope that having a Black President would signal the start of a post-racial era. How has that worked out? Race relations in America are now almost as bad as they were in 1968 – in fact worse, as there are no more cards left to play.

The alacrity with which the Left has jumped on the gun control band wagon over this case is yet more proof of their busted flush. Even Obama’s comments, which have already alarmed so many in the powerful pro-gun lobby, are tentative. Linguistic analysis suggests they are larded with their own defeat and future irrelevance:

I say that recognizing the politics in this town foreclose a lot of those avenues right now.

Great words from a politician who will be gone next year! His statement is also predicated on an impossibility:

. . . it’s going to be important for…us to be able to shift how we think about the issue of gun violence collectively.

America thinking collectively and in liberal lockstep! LOL. Any sane person knows that gun control is not going to happen, especially at a time when America’s police are being leashed in and held back in case some low IQ thug or rampaging mob suffers a broken fingernail.

Gun rights are also the main beneficiary of the ever-growing cynicism that people feel about the failed policies of the ruling elites:

If you are for gun control, then you are not against guns, because the guns will be needed to disarm people. So it’s not that you are anti-gun. You’ll need the police’s guns to take away other people’s guns. So you are very pro-gun, you just believe that only the Government (which is, of course, so reliable, honest, moral and virtuous) should be allowed to have guns. There is no such thing as gun control. There is only centralizing gun ownership in the hands of a small, political elite and their minions. — Stefan Molyneux (from his Facebook page)

Given how hard it would be to actually institute gun control in a country as large, dysfunctional, and welded to a tradition of gun ownership as America, the Left’s focus on it is a de facto admission that racism is ineradicable. Of course racism, or simple racial consciousness of one’s group and interests, can never be abolished. This is one of the foundation stones of the New Right and the Alternative Right. But it is nice to see that this point is also implicitly admitted by our enemies. Perhaps this constitutes the first step to arriving at realistic solutions to the hitherto irresolvable problems of the modern multicultural state.