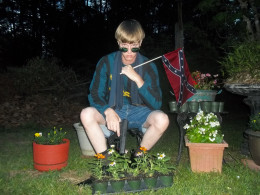 You spend much of your day in the great outdoors, and you have observed that the sky generally looks blue. Yet in newspapers and on television the sky is always red.

You notice the discrepancy between what you know and what you are told, and since, in this episode of The Twilight Zone, you are sufficiently strong-willed not to accept an obvious falsehood, you refuse to comply with the media’s systematic mischaracterization of the sky’s true color. You also realize that something is very wrong.

Many racialists have experienced an initiating revelation of this sort. We notice that on some important subject we are being lied to, and that the lies are not merely false but obviously false, so obviously false that it would require actual stupidity, or some willed equivalent, to believe them.

My own revelation came in response to affirmative action. Various authority figures and liberal learned elders informed me that affirmative-action preferences do not really constitute racial discrimination against members of our race. Since I am not a moron, I knew that I was being lied to on an important subject. It is arithmetically impossible to construct a system of racial preferences that does not entail racial discrimination.

The beginning of Dylann Roof’s racialist illumination came, if we can trust his online manifesto [2], from reading the Wikipedia article on the Trayvon Martin case. “I was unable to understand,” he writes, “what the big deal was. It was obvious that Zimmerman was in the right.”

George Zimmerman’s innocence is, much like the hotness of the sun or the blueness of the sky, not a debatable proposition but a certain fact, despite diligent efforts by television reporters, with malice aforethought, to convince the public otherwise. Any accurate summary of the case, like the account that Roof found on Wikipedia, will lead a rational observer to side with Zimmerman over Martin. A jury in Florida properly came to the same conclusion.

Since Roof is not a moron, he knew that the legal system and the dominant media were jointly, with some assistance from President Obama, attempting to convict and imprison an innocent man, and he found that fact disturbing, as any moral person would.

He became even more disturbed when he discovered, through the modern miracle of a search engine, that Black-on-White crime is statistically common and White-on-Black crime comparatively rare: “I was in disbelief. At this moment I realized that something was very wrong. How could the news be blowing up the Trayvon Martin case while hundreds of these black on White murders got ignored?” Despite abundant evidence of a real pattern of Black violence against Whites, the media had elected, as part of their longstanding effort to sustain a false pattern, to publicize the death of a Black thug instead.

It is worth stressing again that none of this should be debatable. George Zimmerman was rightly exonerated on the evidence. Belief in his guilt would require either literal stupidity or a willed effort to ignore physical evidence.

And even if Zimmerman had been guilty, and even if we were able to accept the doubtful proposition that Zimmerman is a light-skinned German rather than a mixed-race Hispanic, this make-believe instance of White-on-Black violence would remain atypical. Interracial violence is, as matter of statistical fact, disproportionately Black-on-White. Anyone with an internet connection and an inclination, as Roof put it, to “type in the words ‘black on White crime’ into Google” will soon discover the truth. Pat Buchanan, relying on 2007 crime statistics, reports that “a black male was forty times as likely to assault a white person as the reverse.”

Roof’s conclusion that something is very wrong was therefore unavoidable, given his willingness to seek out evidence rather than avoid it. The crime statistics he found, on the website of the Council of Conservative Citizens and elsewhere, are true. Most violent interracial crime, as the Council reports, is Black-on-White. On this subject Roof could have avoided racialist sources and consulted instead the professional antiracist Tim Wise, who has acknowledged that “there are more black-on-white interracial crimes than white-on-black interracial crimes.”

These facts were not invented by devious “racists” attempting to deceive the gullible; the real deceivers are those in the media and in the racial-grievance industry who deviously promote a vision of victimized Blacks routinely assaulted by hate-filled Whites. To manufacture evidence for their false vision they do not hesitate to propagandize for the imprisonment of obviously innocent men, such as George Zimmerman and Darren Wilson.

Dylann Roof’s crime in Charleston was about as contemptible as any crime could be. He not only murdered innocent people; he also murdered them, as he has apparently acknowledged, after they had welcomed him into their church and had shown him kindness and Christian fellowship. His crime merits the maximum penalty, and he will surely receive it.

Yet it is impossible, despite his terrible crime, to deny the intelligence behind the manifesto he apparently wrote, and it is impossible not to share his sense of disturbed surprise at a politicized media behemoth that so systematically and maliciously misrepresents the truth. All of Roof’s racialist thoughts, up until the moment he decided to become a killer, were rational and insightful.

Although multiracialism is a powerful ideology propagated by a determined elite, it is also manifestly false, and in our era the truth is often difficult to suppress, despite the best efforts of our masters. Roof stupidly and wickedly chose to assist them, by providing a genuine example of anti-Black racial crime in place of the false examples that they were previously forced to manufacture. It nevertheless seems likely that his experience of finding the truth concealed behind antiracist lies will become increasingly common. The beginning of racial illumination often requires only a willingness to notice the obvious, and the power of the dominant media to conceal the obvious is in decline.

Being right doesn’t mean we’ll win, but it certainly helps, and a political system that must rely on transparent falsehoods suffers from a tactical disadvantage, no matter how unassailable it may sometimes appear.