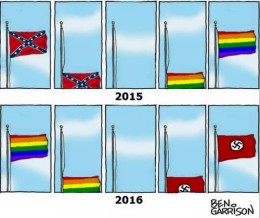 Some points in response to Counter-Currents.

Greg Johnson has reposted two essays on gay marriage. I have one disagreement, followed by general agreement.

Why not call it “marriage”? Because of a deep conviction that marriage is a more serious institution, because it provides the best framework for begetting and nurturing the next generation. Therefore, marriage should enjoy a higher dignity and status than mere domestic partnership. Gay marriage advocates have a ready reply to this: straight people who cannot have children, or who choose not to have children, are allowed to marry. So marriage is not about reproduction. There is no real reply to this argument. Yes, some anti-natal couples may change their minds and choose to have children. But that is not possible for sterile couples, who still can marry. Gay marriage advocates also point out that sterile straight couples can still have families by adopting children or using surrogate parenting — and so can homosexual couples, which opens a whole new can of worms.

I disagree. I will argue that a sterile heterosexual marriage is qualitatively different from a homosexual one. I argue thus. Any population group has a vested interest in promoting heterosexual relations, since those lead to reproduction. Societal stability is enhanced when that reproduction takes place in a monogamous marriage. Thus, heterosexual marriage should be promoted and celebrated in a society. People who are intentionally childless should be frowned on, since they set a bad example and degrade the biological value of marriage; they promote the wrong image. But, if young enough, they can always change their mind, the potential for reproduction is there.

What about the sterile? While they cannot have children, by marrying they are participating in the societal norm of heterosexual marriage. They help reinforce and legitimize that norm through their own choice and commitment to be married. They enhance the social conformity in favor of heterosexual marriage. Further, if we want to encourage such marriage to the masses, we need to market it as having benefits other than reproduction (even if, as racialists, that is our real intent).

We need to celebrate the various benefits both husband and wife derive from marriage (easier to do of course in more traditional times than today, but the argument still holds). A sterile heterosexual married couple, by their marriage, affirm to all who see them, their belief that this form of marriage has benefits, it is good, it is desirable, it is special, it is something that all (heterosexual) adults should aspire to. By marrying, such people help promote the institution of heterosexual marriage and hence promote the reproduction of their race by contributing to the societal “common good” of stable man-woman pair bonds.

So-called gay marriage does not of this, it cheapens the institution of marriage, it further divorces it (no pun intended) from children and family. A childless (especially not by choice) heterosexual marriage still supports a pro-natalist institution. At best, gay marriage is neutral to that, if not destructive.

On the other hand, there is much I agree with here.

I also agree that when considering homosexuality (a subject that in general I have little interest in), a “give and take” attitude can be constructive. A degree of tolerance can be given to gays, in exchange for them to stop allying with the Left to wreck race and civilization, and an admission from their part that they are abnormal, analogous to a disability. For example, I don’t hate people who are deaf, but if they attempt to declare deafness as normal, desirable, the same as hearing, if they also declare a “deaf culture” (and some do) and refuse treatments for themselves and (especially) their children (if deaf as well), then I do have a problem. The same goes for the blind, and also considers that accommodation can only go so far: we cannot have blind brain surgeons, taxi drivers, or airplane pilots, regardless of how “unfair” that is. Homosexuals need to accommodate the needs of the larger society in exchange for tolerance. They are abnormal regardless of how one wants to define that – either based on frequency or biological fitness. But if they defend their family and ethnic genetic interests, that is all to the good. One can argue that homosexuals (and anyone who does not personally reproduce) have a relatively greater interest in their race’s genetic continuity (as well as that of their family), because that is all they have to work with to improve their inclusive fitness. They also need to understand that many heterosexuals find the idea of homosexual relations repugnant and would – especially if they value genetic continuity – be greatly displeased if their children were homosexual and did not find some way to reproduce (as opposed to adopt). Of course, childlessness of heterosexual children would have the same negative effect on their parents’ fitness, but without the aesthetic disgust toward homosexual acts.

Having said all of that, better a homosexual racist than a heterosexual liberal. Better gay than a race mixer. I’ll take Ernst Rohm as a comrade over John Derbyshire any day.