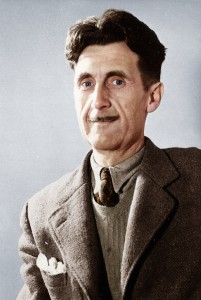 There’s a story about George Orwell’s death that’s been bubbling up from the underground for the past 20 years or so. To the best of my knowledge it’s never been published anywhere. And this is odd indeed, because all the essential pieces have been out on public display for a long time—in biographies, memoirs, and newspaper headlines. Anyone, almost anyone who cares to, can connect the dots.

So here’s the story, as briefly as I can put it. The writer George Orwell, alias Eric Blair, is supposed to have died at age 46, quietly and suddenly, of a lung hemorrhage, on the night of January 21, 1950, at University College Hospital, London. But actually he did not go like that. One way or another, Orwell was murdered.

At the very least, there was foul play, inasmuch as he was permitted to die a lingering death for the hour or two it took him to suffocate. Because apart from those pre-midnight hours of January 21, 1950, Orwell had been getting round-the-clock care, with nurses and orderlies always in attendance. The nurses’ station was a short distance down the hall. But on this particular night the attendants all stayed away, and let Orwell—or made Orwell—choke to death on his own blood.

He’d been in UCH for four months, and he was the hospital’s celebrity patient. Visitors to his sickbed included David Astor [1] and novelist and school friend Anthony Powell; as well as Malcolm Muggeridge, Julian Symons, and Stephen Spender.[2] Orwell was England’s, perhaps the world’s, most famous and successful living writer. Nineteen Eighty-Four had been topping the bestseller lists throughout Britain and North America, having sold a half-million (hardbound) copies in its first six months of publication.[3] After decades of struggle, he was now rich and famous, with a beautiful young new wife named Sonia Brownell, a former assistant editor of Horizon.

True enough, he was also frail and weak from tuberculosis. But he and Sonia and the doctors believed he was now sturdy enough to fly to a sanatorium in Switzerland on January 25th. A friend gave him a fishing rod as a going-away present. Orwell kept it at the foot of his bed, his mind full of thoughts of angling in the mountain streams around Gstaad. Sonia chartered a airplane for the flight on the 25th. On the night of the 21st, she was out at a private bar with her friends Ann Dunn and Lucian Freud, making last-minute plans for the trip (Freud was coming along to assist George). Next morning Sonia rang the hospital and learned that her husband was dead.[4]

Orwell’s sudden death, about three days before he was to fly out of the country—and when moreover he was thought healthy enough to do so—is just a little too pat, a little too fishy. And just a little too convenient for any Orwell ill-wishers, who, if not exactly legion, were nevertheless highly placed, and had a good motive for getting rid of Orwell.

Because Orwell had been “naming names” for an anti-Stalinist propaganda section of the Attlee government’s Foreign Office.  This covert propaganda office (blandly called “Information Research Department”) were hoping to enlist some liberal-minded writers to produce articles and books “to combat Communist propaganda, then engaged in a global and damaging campaign to undermine Western power and influence.”[5]

But which writers should they approach? Who in Ernie Bevin’s Foreign Office (then giving steady employment to the highly unsteady likes of Guy Burgess and Donald Maclean) could possibly distinguish between, say, a patriotic British socialist like Orwell, and a crypto-Communist or fellow-traveller?

Fortuitously there was an IRD official, Celia Paget Kirwan, who was a personal friend of Orwell himself. She proposed enlisting his aid. So in the Spring of 1949 Celia paid George a visit (he was then in a TB sanitorium in the Cotswolds). Orwell said he’d be delighted to help; he would draw up a list of filmmakers, actors, “journalists and writers who in my opinion are crypto-Communists, fellow-travellers or inclined that way and should not be trusted as propagandists . . .”[6] [7]

The list of 35 “politically unreliable” names that Orwell sent to Kirwan was amusing, opinionated, and of dubious practical value. (“Paul Robeson—Very anti-white; John Steinbeck—Spurious writer, pseudo-naif; Bernard Shaw—Reliably pro-Russian on all major issues . . .”) Nevertheless the list, and the story of Orwell’s cooperation with the IRD, remained a state secret till 10 July 1996, when the Public Records Office declassified and released the IRD documents. The following day the story that Big Brother’s creator had himself “named names” was all over the front page of London broadsheets.

The newspapers never thought to draw a connection between Orwell’s bedridden anti-Communism of April 1949 and his sudden death nine months later. No one seemed to recall that one of Orwell’s last visitors was a fellow named Andrew S. F. Gow, Orwell’s onetime classics tutor at Eton, latterly a don at Trinity College, Cambridge.

In January 1950, “Granny” Gow (as the boys had called him at Eton) suddenly materialized at University College Hospital and paid Orwell a visit.[8] The visit is suspicious on several counts. Gow had been ensconced at Cambridge since 1925 and seldom travelled even to London. He and Orwell were not fast friends; Gow had not thought much of the young Eric Blair when the latter was a lazy student at Eton College in the early ’20s. Orwell did send Gow a copy of Animal Farm in 1946, but otherwise the old tutor and student had seldom communicated. They don’t seem to have laid eyes on each other since 1927.

So what was the old don doing at UCH that day? Gow offered Orwell the lame explanation that “he was in UCH to see a Trinity man and happened to hear that Blair was there too. Years afterwards,” writes biographer Bernard Crick, “[Gow] could not remember the name of that Trinity man, and was probably making an excuse . . .”[9]

That is putting it lightly. According to several espionage historians and at least one very prominent art critic, Gow was Anthony Blunt’s controller within the Soviet spy apparatus, and probably his recruiter as well.[10] If this is true, Gow not only was the Soviet nexus to Blunt, he controlled the other, younger, “Cambridge Spies” too—Philby, Burgess, Maclean, Cairncross, the lot.

Dessicated, crusty old Granny Gow was a most unlikely candidate for spymaster. And this could be why he was so supremely successful. Gow died in 1978 (a year before Blunt was exposed in the press), leaving very little evidence that he had ever existed. Strangely for a scholar, he published next to nothing. There are books of Horace and Theocritus “edited” by Gow; a dusty anthology or two; and a thin collection of four extremely dull Christmas letters from the early 1940s, telling about how Trinity is getting on during wartime, that I once found in the Kensington Branch Library in London. And that’s pretty much it. When you go hunting Gow, he turns into the little don who wasn’t there.

For the past 35 years, racy memoirist and art critic Brian Sewell has been talking and writing about his decades-long friendship with Anthony Blunt, the disgraced ex-spy, art historian, and onetime Surveyor of the Queen’s Pictures. Inevitably, in Sewell’s stories about Blunt, Andrew Gow always makes an appearance.[11]

Sewell first met Gow in 1970, when Blunt asked him to go to Cambridge and deliver a drawing that Gow wished to buy. Thereafter, till Gow died in 1978, Sewell served as a courier and go-between for the two old men. Indeed, it was Andrew Gow himself who first confided to Sewell the role Blunt had played as a Soviet spy.

But Sewell did not care for Gow at all:

Gow struck me as the coldest man I had ever encountered, a man of calculated silences, intimidating, and, beginning with “Anthony wishes you to know . . .” he told me the tale of communism and espionage that now everybody knows; he offered no other reason for doing so.[12]

In late 1979, following Sir Anthony Blunt’s public exposure as the “Fourth Man” (he had actually confessed to MI5 many years before), newspapers began to speculate about a Fifth Man. Brian Sewell wrote a letter to the Times, supporting the beleaguered Blunt, and finishing with the declaration that “the fifth man is dead.”

So Sewell long knew about Gow, and Anthony Blunt knew that he knew:

When, very shortly before his death, Anthony asked who my fifth man was, he did not demur when I said, “Andrew Gow”, but broke eye contact and stared out of the window.[13]

So where does this leave us? Andrew Gow—Cambridge don, Fifth Man, Soviet spy—was one of the last to see Orwell alive. It’s not necessary to wonder why or how Gow might have arranged Orwell’s demise. If we accept the idea as plausible, then the obvious answer is that Moscow gave Gow the order. Moscow had motive; Moscow had opportunity. Moscow had agents in the Foreign Office and knew that the author of Animal Farm and Nineteen Eighty-Four was assisting anti-Communists in the IRD.

So Gow went up to London, dropped in at University College Hospital, visited Orwell (“Sheer coincidence, old boy!”), noted his room location, and discovered that this quarry was planning a move to Switzerland. This last bit of news made it imperative to dispose of Orwell while he was still near at hand and could be finished off discreetly.

If we reject this explanation, then we are left with the official, “received” version, a dubious tale with nothing to recommend it. We are asked to believe that Gow’s visit was pure happenstance, completely unconnected to his role as spymaster. Orwell hemorrhaged and died—just like that!—right there in his hospital bed, with his new fishing pole nearby. And as he gasped for breath for an hour or two, not a single orderly, nurse, or physician ever bothered to look in and check up on their most famous patient.

1. David Astor, 1912-2001, publisher of The Observer newspaper, and son of American expatriates Waldorf and Nancy Langhorne Astor. Astor was also best man at Orwell’s hospital-bed wedding at UCH in October 1949.

4. There is disagreement among biographers about the time of Orwell’s death. Bowker, Crick, and Hilary Spurling (Sonia’s biographer) say it was late on the 21st, while Jeffrey Meyers (Orwell, 2000) makes it the wee hours of the 21st, nearly a full day earlier.

6. Meyers says the Cranham visit was in April; the Guardian article from July 1996 says it was in March.

7. One of the books promoted by the IRD was Orwell’s own Animal Farm, in many foreign-language editions. IRD papers include an amusing note from an embassy official in Cairo, praising the book’s usefulness: “The idea is particularly good for Arabic in view of the fact that both pigs and dogs are unclean animals to Muslims.” (Guardian, 11 July 1996.)

8. The story of Gow’s visit to UCH is recounted in several Orwell biographies, but as of 1996 it had appeared in only one, the “authorized” George Orwell by Bernard Crick.

10. Barrie Penrose and Simon Freeman’s Conspiracy of Silence: The Secret Life of Anthony Blunt (1988) seems to be the first “Cambridge Spies” history to discuss the Blunt-Gow connection, but this had been rumored and discussed ever since Blunt’s exposure in 1979.

11. I interviewed Sewell in 1997 for a magazine article that touched upon Blunt, and got in a question or two about Gow. The story Brian related was essentially the same one recounted here.