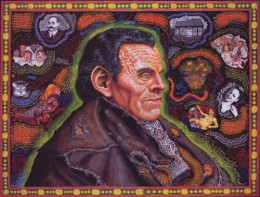 “The white people invented the atom bomb, and a little later they disappeared.”

May 27th is the 121st birthday of French writer Louis-Ferdinand Céline (real name: Louis-Ferdinand Destouches)—avant-garde novelist, propagandist, dissident, and physician. In America Céline is mainly known for his first two dark, expressionistic novels, first published in the 1930s, and immediately recognizable in the iconic black-and-white New Directions paperback editions first issued in the 1950s and ’60s.

It was lucky, perhaps inevitable, for New Directions publisher James Laughlin to grab the rights to those edgy novels and put them out under the noses of a generation or two of college students and literary hipsters. Because who were Céline’s biggest fans and proponents in 1950s? Why, the Beats of course, mainly W. S. Burroughs, Allen Ginsberg, and Jack Kerouac.[1] Their endorsement went a long way to taking the curse off Céline, positioning him as a transgressive, nihilistic proto-hipster, rather than one more half-cracked Nazi collaborator.

Because that’s the other thing about Céline, his other claim to fame. In the late 1930s he cranked out three heavy tomes of vituperation against contemporary culture and politics (beginning in 1937 with his notorious Bagatelles pour un massacre [2][2]), all of them denouncing Jewish power and influence. Come the Occupation, 1940-44, Céline moved in pro-Nazi, anti-Bolshevist literary circles, even though neither the Germans nor the French collabos had any use for him as a propagandist. He was too eccentric, vulgar, obscene. Nevertheless he and his wife were forcibly evacuated to Germany at “Liberation” in August 1944, and eventually found their way to Denmark where Céline was convicted in absentia on some vague charge (indignité nationale), though he was later granted amnesty in 1951.

Céline’s reputation in modern France is most peculiar. He has never ceased to be widely popular. His fervid late-’30s political “pamphlets” aren’t officially in print or on the stands at the librairie, but most of his other work is readily available, in many editions. The French intelligentsia in particular regard Céline as a national treasure, a rock-star literary titan of the 20th century.

But you can’t just come out and say you like Céline. You have to hedge, apologize, denounce with faint praise. This is true even if you’re Jewish; even if you’re Nicolas Sarkozy. A few years ago, when the French government added Céline’s name to the roster of an upcoming national cultural celebration, critics and politicians went through a ritual of forelock-tugging as they defensively praised Céline as one of their favorite writers. [3] Shrugged President Sarkozy: “You can love Céline without being an antisemite, just as you can love Proust without being a homosexual!”[4]

I first read Céline forty-one years ago. (June 1973 . . . Watergate . . . Gemstone Stationery.) It was hot and muggy. I was on a bench at the end of the Christopher Street pier in Greenwich Village, and I was avoiding some work I should have been doing. I was in my teens, but I knew these old people from the Beat crowd, and they had been talking about what an incendiary, verboten, pro-Nazi, anti-Semitic scamp this Céline person was supposed to be. Reading Céline—or having read Céline—seemed to be the mark of a sophisticate. So I sat there reading Journey to the End of the Night and Death on the Installment Plan over a couple of weeks (they were always prominently on display at Wilentz’s 8th Street Bookshop[5] ), plowing through them doggedly and wondering what the hell was so controversial about them.

Both novels are blackly comedic and semi-autobiographical. Journey to the End of the Night (Fr.: Voyage au bout de la nuit) is mainly a long picaresque tale that goes from Paris at the start of the Great War, to the Western Front, then to African jungles, then—weirdly, disjointedly—to an automobile plant in Detroit, and finally back to Paris again. The second book, Death on the Installment Plan (Fr.: Mort à crédit) is a series of sense-impressions from their author’s experiences working in a public medical clinic, with long hellish flashbacks to childhood and family life.

What sticks in memory from both books after lo! these many years, with scarcely a return dip in the meantime, is a miasma of filth, poor sanitation—in the trenches, in the slums, everywhere. (Curiously, Céline’s first book, his doctoral thesis in fact, was a biography of Ignaz Semmelweis,[6] the father of obstetric antisepsis.) The obsessive disgust is very similar to the first part of Orwell’s Down and Out in Paris and London, which was written about the same time, so one author is unlikely to have influenced the other. Orwell was aware of Céline in the 1930s, since he mentions him in his essay on Henry Miller; but only just barely.

Far less popular in the English-speaking world are Céline’s last trilogy of “novels”: D’un château l’autre [3] (Eng.: Castle to Castle), Nord, and Rigadon. English translations of the last two exist, but are hard to find. This trilogy is much more pure memoir than the first two books, and arguably a bit more . . . accessible . . . once you get past the . . . self-indulgent, annoying, three-dot declamatory style . . . that Céline had become addicted to.

The three books describe the adventures of the narrator and his wife after they flee Paris in August 1944. At first their German keepers move them to the Berlin region, then they are transferred for several months to the famous castle of Sigmaringen, north of Lake Constance, where the government-in-exile of Vichy France are also being housed. Céline, acting as house physician, encounters the major players (Marshall Petain, Pierre Laval, etc.) up close, and draws some pathetic portraits of them as they veer from fear to fleeting hope to despair. Finally, the doctor and his wife leave the castle and follow a convoluted itinerary till they wind up in a hotel in Copenhagen where all seems matter-of-fact, bizarrely unaffected by the last five years of war.[7]

The trilogy falls into that very small genre of literature that one might call the Reich-Apocalypse Escape Memoir. As I say, it’s a small genre, but one other entry that resembles Céline’s in level of detail is Christian de la Mazière’s The Captive Dreamer (1974; Fr.: Le reveur casqué). La Mazière was a French nobleman who joined up with the Waffen SS, Charlemagne Division, in the final months of the war and was eventually taken prisoner by Polish partisans. He speaks about his experiences near the end of the documentary The Sorrow and the Pity (1969), in an interview that takes place in Sigmaringen castle itself. What doesn’t appear on screen is the comic episode of how he just barely crossed paths with Céline.

In his memoir, La Mazière relates how he and another newly commissioned officer decide to take a day trip to the castle. It is February 1945, they have just completed Waffen SS training, and will soon be shipped out to the Eastern Front. They take a train to Sigmaringen, imagining that they’ll present themselves for the approval of Pétain and Laval. They climb the hill to the castle . . . but no luck. The guards tell them the Maréchal and Minister aren’t taking social calls. On their way down from the castle they spot Céline and his wife in the street, walking with fellow collabo Lucien Rebatet. La Mazière wants to stop and chat with them, but his companion won’t be detained; he’s too spooked by the whole place. And so they hurry on to lunch.[8]