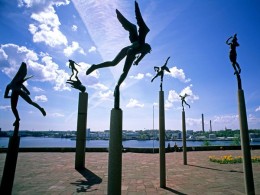 The Racial Law of Sociopolitical Thermodynamics

The Left has an easier time of things than the Right, given that the Left’s objectives run alongside the flow of increasing entropy, while the Right’s objectives run in the opposite direction. This underlying fundamental difference explains why attempts at “mainstreaming” and “working within the system” are doomed to ultimate failure, and also explains why the Left has been so easily winning all the battles of the last three-quarters of a century.

We can look at entropy not only with respect to the physical sciences, but also from the standpoint of race, civilization, society, and the sociopolitical milieu of any nation and people. The Left traditionally works to increase entropy: increasing dissolution, disorganization, heterogeneity, cultural degradation, miscegenation, breaking down barriers, and eliminating more compartmentalized distinctions. Just as physical entropy is the default direction of flow, so too is sociopolitical entropy. Within the “West” (broadly defined), the Left finds its goals supported by powerful forces: Jews want more diversity and the destruction of traditional Western peoples and their cultures, Coloreds want access to White lands and goods, Big Business wants cheap labor, Leftist politicians want more voters, Cultural Marxists want to impose their degraded vision over a defeated and humiliated West.

The Right on the other hand traditionally has had goals and objectives that run counter to increasing entropy: increasing order, organization, homogeneity, High Culture, racial preservation, maintenance or even heightening of inter-group distinctions. In contrast to the Left’s egalitarian leveling (analogous to the high entropy situation of evenly distributed particles all at the lowest energy state), the Right champions hierarchical distinctions (analogous to the low entropy situation of structured distributions of higher-energy particles mixed along with their lower-energy counterparts). The Left’s agenda flows easily, the agenda of the Right requires constant struggle and vigilance.

The Left can be in power a relatively short time and still do massive damage: open the borders to mass immigration, amnesty illegals, encourage degeneracy by appealing to peoples’ prurient interests, pass “hate speech” laws, enact affirmative action – polices supported by the entrenched interests mentioned above, and only feebly – if at all – opposed by deracinated, individualistic Whites with their universalist altruism. The Left’s high entropy regime can quickly create demographic “facts on the ground” that may prove difficult if not impossible to reverse.

The Right in contrast has to struggle against the entrenched forces, and against the “White Man’s Disease” (unwillingness of Whites to promote their own racial group interests), to reverse the tide of entropy and restore a more healthy racial and cultural state. The situation in the USA is quite instructive.  Here, we have no far-Right, but at best, paleo-conservative immigration restrictionists. Very well. How do they fare? Forget about repatriation. Forget about limiting legal immigration. Even forget about curtailing future illegal immigration. The American Right struggles even to stop giving amnesty to the enormous numbers of illegals already here. Everyone throws their hands up in the air and says, “They are here and cannot be deported, what can we do?” Each alien influx becomes considered a permanent part of the population.  Each influx is considered “impossible to deport.” The Right struggles mightily to just try and slow down the influx and has given up doing anything about the aliens already here. The Left merely has to maintain the status quo of mass immigration and allow demographic change to inevitably darken the West. The same principles apply to “gay marriage,” promotion of miscegenation, enforced racial integration, or any other Leftist meme. Once achieved, they become a permanent part of the sociopolitical landscape. Society devolves further, falls to a lower level, and becomes more formless, less distinct, more uniformly degenerate, another step toward death and decay.  Instead of continued evolution toward a higher form of man, instead of continued racial differentiation and sub-speciation, we head toward the dead-end of the universal Brown Man, the coffee-colored Last Man, the irreversible destruction of humanity’s racial patrimony and its highest hopes for progress and a path to the stars.

Hence, all the Left has to do is create a situation (against little to no resistance), and the Right finds itself unable to do anything about it. Turning a blind eye to an unguarded border is easy. We have seen that deporting millions of illegal aliens already here is (politically at least) difficult to the point of being practically impossible. The increase-the-entropy degradation promoted by the Left: easy. The decrease-the-entropy cures wished for by the Right: difficult if not impossible. Certainly, any Right regime elected as a “moderate” force, through “mainstreaming,” is never going to have the political capital to enact any of the harsh measures required to stop, much less reverse, the endlessly flowing damage initiated by the Left. Thus, the Left smirks about the Right being on the “wrong” side of history; more accurate to say the Right is on the wrong side of sociopolitical thermodynamics. We can call it The Racial Law of Sociopolitical Thermodynamics. In the absence of a concerted effort of opposition, the default pathway will be destruction of the higher races, cultural dissolution, a jumbled mass of egalitarian Last Men, the end  of any hope for a higher humanity.

Therefore: the objectives of the Left are easy to attain and difficult or impossible to reverse; the objectives of the Right are at best extremely difficult to obtain and very easy to reverse. After all, a Rightist government can struggle for years to achieve even a very limited improvement of the damage done by a previous Leftist regime. Once the Left is in power again, they can very easily reverse any small gains achieved by the Right, and create even worse “facts on the ground” impossible to reverse.  Therefore, the Left does not require continuous power to achieve their long-term goals, since most of the actions they take are practically impossible to reverse in the current political system. Every time the Left has the power, they push their agenda a bit further, each time permanently fixing that gain as the new sociopolitical reality. The Right, on the other hand, in truth, requires a permanent hold on power in order to achieve its long-term objectives, since the objectives of the Right are by nature low-entropy and need to be constantly enforced and maintained by will and vigilance. Gains by the Right are not by their nature practically permanent. Low entropy needs to be maintained through outside force, given the natural tendency for entropy to increase. Coloreds will always want access to White lands. The degenerates will always want to vulgarize the culture. All of the dark, negative forces will always be there. Mainstreaming Rightists are in the long term useless, since they lack the moral authority and political capital to enact bold measures, and since as part of the democratic system, their tenure in power is temporary, so that whatever little they do achieve will be wiped out by the next Leftist regime.

The only short-term value for mainstreamers is if they achieve power they can delay further Left advancement, slow down the inevitable entropic decay. But for a real solution, there must be radical change and a permanent racial nationalist regime that will unleash the forces of tribalistic and will-to-power chaos in order to create a system of racial order and advancement (similar to the physical scheme in which localized decreased entropy is achieved only by increased entropy elsewhere – we will replace the Left’s use of order to create chaos by the Right’s use of chaos to create order). And this is something only Hardcore Nationalists can achieve; Softcore Mainstreaming Nationalists need not apply.