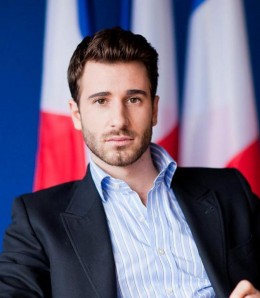 Julien Rochedy is the former director of the Front National’s youth organization (FNJ). He wrote this article after he left the FNJ’s leadership, remaining on good terms with the party, which he felt allowed him to speak more freely and critique the FN’s official assimilationist stance. The text gives some idea, beyond Marine Le Pen’s electorally necessary but potentially dangerous formal compromises [2] with political correctness, as to what brighter people in the party are thinking. The title is editorial.

For years, I convinced myself that the best message to spread was that of assimilation. Several reasons led me to this.

Firstly, this principle had been abandoned by the others, the left and the right, who defended integration or even “inclusion,” that is to say systems leaving people of immigrant origin the privilege of conserving, if not the entirety of their culture, at least the pride in their origins and everything that goes with it. Nature abhorring a vacuum, there was here a principle to recover that could not be more republican to stand up for politically.

Furthermore, I thought that this principle particularly corresponded to, let us say, the French soul. France being a uniquely cultural nation, and the French not having, by nature, almost any ethnic consciousness (unlike the Germans, the English, Italians or others), we could only ask France’s inhabitants to respect a majority culture. This message, it seemed to me, not only could be understood and appreciated by the French, but presented in addition the – considerable – advantage to not be vulnerable, or very little, to accusations of racism which have always fallen upon the national movement.

I supposed that the French tree was capable of bearing new branches, and that, being in a desperate impasse, the best that we could do was to transform a maximum of people of immigrant origin into “cultural” Frenchmen, that is to say to take in themselves, the most that they could, a part of our civilizational heritage in order that they too transmit it.

This discourse of “assimilation,” with all the advantages it had, became the one Marine Le Pen chose to talk about immigration. It is still today hers, and, as one of her spokesmen for years, I spread them with her as soon as a microphone or audience was offered to me.

Today, I have to say it, I want to do my communitarian “coming out.” Here too, several reasons are leading me to this.

Firstly, even if I was tempted to think about it the least possible, I knew very well that it is impossible to assimilate 10 to 15 million people. The argument is banal but valid: We can assimilate individuals but not peoples. At the scale of these numbers, we are dealing with peoples, not with individuals having been transferred in host families. This has never happened through history, and given that the latter is, for us, our only true political school, we do not see how such an achievement could be possible today, especially as the conditions, were we even to try, are currently the worst possible. Indeed, French culture and civilization’s power of attraction has strongly diminished. We are alas not in the 18th or 19th centuries. We have given way to the Anglo-Saxon cultures for too long already, and, even though a certain number of ethnic French [Français de souche] have already virtually no more attraction for their own civilization, we would want recent Frenchmen to become Jean Gabins or recite Corneille or Racine? This seems perfectly improbable. And as in any case we have not even begun, for 30 years, with assimilation, we find ourselves face to face with people already shaped by their own culture. In short, it is already too late. Add to this cultures profoundly different from European cultures, because African, Muslim, etc, and you find yourself in an impossible situation.

Bottom line, currently, assimilation is a dream or an exceptionally difficult challenge. The communities are already forming on our territory, perfectly naturally. One million resuscitated black hussard,[1] svelte and severe, could do nothing against this. And in any case, we don’t have them. Therefore, the die is cast.

But as we are talking of “political messages,” let us come to that. The wiliest in the Front National no more believe in the assimilation of 15 million people than I do, but skillfully respond that such a discourse is useful to have. It reassures the French on their old illusion of a social peace guaranteed by a strong common culture, and could even have people of immigrant origin join the movement who have made the personal choice of perfect assimilation.

Yes, it can work, and incidentally, to a certain degree, it does work.

Nonetheless, I believe that it is possible for the FN to have be ahead of the game by recognizing a fact which will be an incontestable reality of tomorrow. In truth, because communitarianism will act as the social system in France – and even in the West as a whole – of tomorrow, the question which remains to be decided is that of its implementation: Will it be a denied and conflictual communitarianism or on the contrary an ordered one?

The political advantages of such a discourse are the following:

Firstly, it would be closer to realities and to the possible. Certainly, in the terms of “political marketing,” this is no longer really essential, but for he who would want to prepare to, actually, wield power, integrating in its software the truth and elements of the possible is not something superfluous.

It would also accomplish the recognized equation of what is already the case, namely that the Front National is the party of the French, of those who feel and breathe to be as such, and who are mostly, whether we want this or not, not of immigrant origin.

In addition, this message would hardly repel the votes of immigrant origin. Let me explain: I have been struck at how such a discourse responsibilizes and reassures French Muslims or simply French of immigrant origin. It does not demand that they become “perfect Frenchmen,” which they do not want to be, with rare exceptions, but allows them to remain what they are, organized, respected, on the only condition that they respect the laws of the country while not being in charge of it. In short, it would raise again the banner of the state above the communities, which would all be, as much as possible, encouraged to bear allegiance to it. We would then have Frenchmen, all reassured in their way of life, but working together for their own good.

Now, certainly, I will be told that this model is that of the United States. Yes, it’s true. Over there, in the archetype, the communities exist and live more or less as they please, as long as they respect the laws of the state and are able to serve it, in the cultivated awareness of serving something higher than them and which guarantees their ways of life.

It is not ideal, of course. But we are not fifteen-year-olds anymore: The ideal is behind us. We must do the best we can with the social conditions which are ours, and too bad if these now resemble the multicultural Anglo-Saxon societies. It is not our fault, it is so. If it had been up to us, there would not have been any immigration and all these problems would never have arisen.

In any case, what is the alternative? If 15 million people, no doubt 20 million tomorrow, will never become, all of them, typical Auvergnians and Bretons, we will have to organize all this a bit, whether we like it or not. If only in order – because we are attached to this – to conserve the classic type of Auvergnian and of Breton. There remains solutions of civil war, of massive remigration, or of genocides, but nobody, in the current state of things, by reason or morality, can propose such solutions. Given this, organizing with France in mind communities which in any case exist and will exist more still tomorrow, seems to be the only at once peaceful and salutary future-oriented solution. The rest is but illusions, anarchy, and blood.

PS: I add, to those who dream of “remigration,” that this can only be possible in a context of clearly identified communities. All of the examples of population movements in history show this.

1. This refers to the so-called “black hussars of the Republic,” the public educators who under the Third Republic (1870-1940) are credited with spreading liberal, secular and bourgeois values, and assimilating the regional populations (Flemish, Breton, Provençal . . .) to a single French national culture.