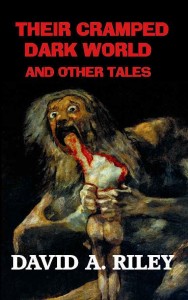 David A. Riley
Their Cramped Dark World and Other Tales [2]
Parallel Universe Publications, 2015

I’ve frequently hammered at the notion that “weird fiction,” like its predecessor, Gothic, is an inherently conservative genre, not only in its themes – the persistence of the past, the reality of hierarchy, the inescapability of genetics and destiny – but also in its techniques; in particular, Lovecraft’s method of creating atmosphere and horror by the piling up of careful observation, grows off of his scientific and conservative adherence to facts.[1]

Not everyone likes this, since most “writers” these days are quite happy to function as unquestioning acolytes of the Leftist ideology of the day.[2] The book under review here seems to be one of them, so perhaps a closer look may uncover some interesting memes.

Since I don’t make a habit of frequenting the vast precincts of weird magazines and websites, confining my attention to a few favorites like Lovecraft or Ligotti, I knew not David A. Riley, discovering this book only when he turned up in my habitual Amazon search for “Lovecraft and free.” His publishers were right to add “Lovecraft” to his descriptors, as there are certainly a lot of Lovecraft tropes here; tentacles with sucker mouths turn up frequently, along with decaying villages with unwholesome, indeed decaying, inhabitants, books that one shouldn’t read, soapstone carvings leading to loathsome metamorphoses, etc.

The stories themselves are serviceable, making for a pleasant way to pass the time. Riley even allows himself an occasional sly bit of humor:

Scorn and cynicism, sourness and disdain, these were Eddie’s usual moods, not some loopy-doopy hippy bliss as if he’d swallowed a happy pill and won first prize in the National Lottery. Harold knew then that his friend must have suffered a breakdown.

Mostly, though, we’ve seen all this before, and reading the stories straight through only emphasizes the familiarity of the plots and themes.

About halfway through, though, a new theme, at least new to me, began to emerge. “Swan Song” presents us with the unattractive figure of one Bennett, a retired (forcibly and early, it would appear) teacher. Divorced (check; what modern woman would want him?), living alone in a shabby flat (check again), he wanders about complaining about the modern world, where you can’t call a spade a spade thanks to all this “PC crap.” Like those damned dirty bums (“homeless”? Bah!) over there.[3] When Bennett discovers they are not merely dirty hippies, but actually filthy rich dirty hippies, and far form being homeless, live in a nearby mansion that an oldie like him can appreciate but which they have selfishly allowed to fall into a Grey Gardens state of decay, Bennett goes ballistic.

He heads off to the pub, where he knows there’s at least two old buggers who will allow him to speak his narrow little mind and find his anti-immigrant sallies to be the dernier cri in witty political observation: two more fat, blotchy faced losers, drinking beer and spewing not-yet dead white male venom.

As always in such fiction – though almost never in real life – the boys have been conducting their own secret vigilante society, doling out violent retribution to whoever for whatever reason violate their crabbed little norms. The filthy rich hippies will get their comeuppance, mates.

One of the amigos gets his head eaten – Bennett, of course, like all non-Leftists, cares not a whit:

Having little empathy, even for his friend, was not bothered by what had happened to Pinky. He was just one less person he could share his time with at the pub. Beyond that he knew he would barely miss him.

Bennett kills the hippie-monsters and then, in a crowning moment of scumbaggery, abandons his other friend to the monstrous thing in the house. In an admittedly nice twist at the end (with the perhaps unintentionally hilarious line “Bennett, you bastard, open this fucking door!”) Bennett and Sam become the new scaly-skinned monsters. And here, Riley delivers his smug little masterstroke:

“We can continue just like before, only better, stronger” [Sam suggests]. “Those old hippies were hard for them to work with,” Sam said. “They had to be pushed and threatened, forced to kill. It went against their principles, you see. The soft old bastards. Damn near starved these creatures to death . . . It’ll be easer with us. We don’t mind killing, do we? We love it, in fact.” Sam grinned.

Perhaps Cthulhu should give himself a break and hang out at BNP and UKIP meetings. Maybe he already does.

If you think I’m forcing that identification, well, I’m not. A later story (the longest, actually a novella), “The Satyr’s Head,” makes it explicit. It’s the usual “don’t buy a damnably eldritch satyr statue from a filthy, visibly decaying old bum” story, but when we enter a pub the really sinister stuff starts:

When the filthy bum turns up dead in an alley, the BNP is quick to try to exploit the mystery:

“I wouldn’t be at all surprised if it wasn’t something all these Asians have been bringing into the country. There’s been an increase in TB already, and that was almost unheard do fa few years ago.”

“No rest for the wicked. Someone’s got to do the devil’s work,” the man joked as the other two smiled in appreciation of his joke. [I guess the reader is supposed to smile too]

“So far there’s been no mention in the press, though the local rag – Billy’s Weekly Liar – isn’t acting out of character there, especially with the elections coming up.”

Of course, the newspapers would never cover up disease or crime among immigrants, now would they? This is England!

Our doomed protagonist is advised to pay him no mind:

“I wouldn’t’ take much notice of Reynolds. The man’s a clown.”

It’s a bit of a tease, though; along the lines of “Swan Song,” I had expected this theme to develop, with Lawson transforming into the ultimate monster, a BNP candidate, or some monstrous new party, using the eponymous head as its symbol. Instead, Lawson’s transformation is “a thousand times more savage and more terrifying”; like Buffalo Bill, he turns out to be some kinda repressed homo:

He only wished that his relationship with Joan, which had been going out with now for three months, wasn’t so peculiarly Platonic. Whether his was his fault or hers, he did not know.

[He wondered} if the dream wasn’t connect in some way with his unsatisfactory relations hip with Joan. But the two things were at such extremes in his mind that he could not connect hem with anything other than shame.

There was no way in which he could deny to himself the perverted aspects [the dream] presented to him. But was he perverted as well?

Yes, friend Lawson is definitely what Maj. “Bat” Guano would call a “deviated prevert.” The dream, in this case, is the usual precognitive “you’ll become a monster” dream, but with some decidedly curious aspects: the satyr is some kind of shemale, with twelve teats and an erect penis, and keeps jumping on his back.

How could he possibly make any kind of headway with Joan, he told himself, with such a foul obscenity as that thing troubling him.

In the end, gazing at the statute, it seem to be “gloating at the way in which it had triumphed over everything else in the flat, including (or especially) the framed photo of Joan.”

The whole tale seems to be some kind of homosexual allegory; the filthy tramp that “spots” him as one of them, the head (of the statute) which he gives Lamson, the signs of his transformation including some “dark sores around his mouth” like some kind of AIDS related malady, etc.

Even the title story has a moment where the victim to be muses that he’s been tricked into staying overnight in a spooky house because his friend is “secretly queer.”[7]

But how could our PC-adhering author possibly suggest there being something occult, perverted, ultimately monstrous, about homosexuals? There might be something more subtle intended here, but the PC crowd is not big on subtlety, at least when it come to whoever their current pets are. Mr. Riley would be advised to tread carefully; one wonders if the BNP bashing is laid on so thick so as to establish his credentials as a good-thnker?[8]

As I’ve said before, Leftism being a pure abstract notion, ungoverned by tradition or even “common sense.” It unrolls with unstoppable logic (as in “the wrong side of history”) from vaguely “sure, why not” ideas to delirious nuttiness, leaving its most loyal supporters in one generation, appearing as benighted fools or enemies of the people to the next.[9] Vigorous union rep and supporter of the New Deal becomes grouchy bigot Archie Bunker.

As someone said recently, the Right tries to make converts, but the Left just want victims. Mr. Riley had better watch out; he may wake up one morning, like K, to find himself on trial; dumped in the waste bin of history with real monsters, like H. P. Lovecraft.[10]

[1] As Steve Sailer has pointed out, conservativism is a matter of noticing things, which PC is designed to prevent. See the essays on Lovecraft published collected in The Eldritch Evola … & Others (San Francisco: Counter-Currents, 2014), especially the title essay and the review of Graham Harmon’s Weird Realism.

[3] Their filthy and diseased forms are described lovingly enough to clue the reader in that these are more than just another pair of dirty hippies.

[5] In fact, it’s an inversion of a story that really embarrasses Lovecraft’s modern fans, “The High House in the Mist,” where the 3 burglars are dirty immigrants.

[6] “But when I say that one little old mayor will die, well then everyone loses their minds!” Trevor Lynch, reviewing The Dark Knight, notes that “In a ‘free’ society we can’t suppress dangerous truths altogether. So we have to be immunized against them. That’s why Hollywood lets dangerous truths appear on screen, but only in the mouths of monsters: Derek Vinyard in American History X, Travis Bickle in Taxi Driver, Bill the Butcher in Gangs of New York [4], Ra’s al Ghul in Batman Begins, the Joker in The Dark Knight, etc.” — here [5] and in Trevor Lynch’s White Nationalist Guide to the Movies (San Francisco: Counter-Currents, 2012).

[7] Dolarhyde: “Do you imply I’m queer?” Loundes (tied up in a chair): “Oh, God no!”—Manhunter /Red Dragon. Does “Lamson” suggest Silence of the Lambs?

[8] There’s also an odd little passage where our satyr-in-transition muses: “There was a smell of fish and chips and the pungent aroma of curry as they passed a takeaway, but even this failed to make him feel at home on the street. He felt foreign and lost, alienated to the things and places which had previously seemed so familiar to him.” Is the longing for familiarity a sign of his evil? And, notice the equation of fish and chips to curry, as signifiers of the Truly British.

[10] In this respect, it’s interesting to see what Riley, or his publishers, have chosen for a cover illustration: Goya’s Saturn Devouring his Son [6].