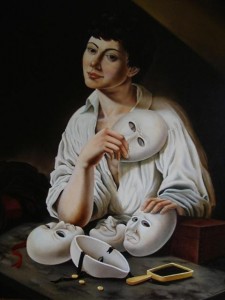 While Jews relentlessly promote intermarriage/miscegenation between Europeans and other groups, and label opposition to this as horrific “racism,” they have quite different ideas for themselves. [2]

But, what about the alleged “high rate of Jewish intermarriage?”

First, the vast majority of such intermarriage, when it exists, is with White Europeans. Thus, anyone who equates Euro-Jewish intermarriage with Euro-Negro/Asian intermarriage is revealing a quite interesting “take” on Jewish identity — the premise that Jews are so distinct from Europeans than one must consider Euro-Jew mixing the same as, say, Euro-Negro mixing. Jews themselves, when they do intermarry, avoid the same type of mixing across wide racial gulfs that they promote in others.

Second, the rate of intermarriage is inflated by second and third marriages, by the “Jews” in question already being hybrids not affiliated with the Jewish community, etc. McDonald has discussed the issue of “intermarriage inflation” in his trilogy.

Third, even IF the intermarriage rate is really ~ 50%, that is still low by the standards of White ethnic groups in America. For example, Alba’s ethnic intermarriage data suggests that groups like Polish-Americans, whose percentage of the American population is roughly similar to that of Jews, have (ethnic and racial, mostly the former) intermarriage rates of ~ 80%. Thus, even the highest estimates of Jewish intermarriage reflects resistance to intermarriage and a greater than average tendency toward narrow ethnic endogamy.

Fourth, again as per MacDonald, there is a tendency for the children of intermarriages to drift away (or be pushed away) from the Jewish community; hence, intermarriage results in a net gene flow from Jews to Gentiles.

In summary, despite the much touted (or criticized within their own community) alleged rate of Jewish intermarriage, such intermarriage is not having the impact on the Jewish community that many imply. Further, to the extent such intermarriage occurs, it is to a vast extent limited to White Gentiles, and even so, there is a question of how many of these mixed bloodlines are entering the Jewish community, in the long term. All of that can be contrasted to the extreme Jewish enthusiasm for, and promotion of, miscegenation between White Gentiles and groups very genetically distant.