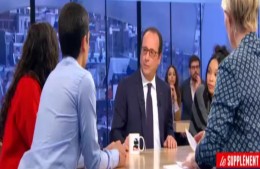 François Hollande went on Canal+ (not to be confused with Quenelle+) to sit down with five teenagers to discuss the issues of the day. The panel consisted of 3 Arabs, 1 half-Black girl, and 1 French boy who, for reasons that were never explained sat across the table divided by spectators while the others were within reach of the President. One segment of the exchange has gone viral. That is where Hollande tries to explain why the difference between Charlie Hebdo and Dieudonné.

Hollande has stated in the past the need to clearly explain to the youth of France the difference between Charlie Hebdo and Dieudonné. It begins with a pretty blonde Collaborationist who tosses this prepared question to Hollande. Their plan all comes crashing down when Yassine, rather than giving the yes or no answer he was supposed to give, responds with a question of his own.

Blonde Hostess: The difference between Dieudonné and Charlie Hebdo, can you explain this clearly and simply?

Hollande: In France, we can make fun of religion, of all religions. That has always been part of our history. We always mocked religion. It is even a principle of liberty. Because the religions were seen as oppressing private life. So we have a right to mock it. There is not, in French jurisprudence, the interdiction of blasphemy, which can exist in other countries. However we do not have the right to call people to hatred. Hatred for a religion. The hate of a category. We don’t have the right. Charlie, when there was a doubt, they were brought before the judge, and they weren’t condemned. Dieudonné, for certain statements under certain circumstances, he was condemned. It is Justice which decides, not the state. Is it the liberty of expression up to the limit, or is it hatred? Hatred is condemned.

Blonde: Do you understand Yassine?

Yassine: Should we hide that we like Dieudonné? Should we be ashamed to laugh at Dieudonné’s shows?

Hollande: We should ask ourselves . . . one laughs at times, sure, those who laugh. But we have to ask ourselves why are we laughing at that?

Nadia: Because it’s funny. Everyone has their opinion on what is funny. With jokes they never make everyone laugh; some people find them funny and others don’t.

Hollande: Oh yeah, and when he dresses up as, uh, as, uh a German, uh Nazi and says he should uh “Kill all the Jews” you think that’s funny?

Nadia: That’s a joke after all.

Yassine: That’s a character he plays.

Blonde: It’s happened in your class that one of your friends didn’t dress up as but pretended to be Hitler [gestures towards a mustache]

Blonde: . . . and you said you shouldn’t have to hide the fact that you are laughing; it’s not possible [inaudible] hiding your laughter . . . OK it’s a joke, in very bad taste, but it’s still a joke. What do you think?

Hollande: Yes if he makes fun of Hitler . . . that’s not a problem because he killed 6 million Jews. If he is making fun of Jews who die or who did die or who are dead in his gas chambers, that is “Hate Speech,” because it could happen again. There is not only the genocide of Jews; there is the genocide that happens, the, uh, soon the Armenians will celebrate the hundred year anniversary. Today also there are the Christians and Muslims who kill each other under horrible conditions. These, uh, aren’t genocides, but they are horrible massacres.

Nadia: Yes, but we talk a lot more about the Jews.

Hollande: That’s because there were 6 million. Do you know. . .

Yassine: But a death is still a death for those killed whether among 6 million Hollande: “We must respect what happened [to the Jews].”

Hollande: What was the Final Solution? It was to kill them all. To exterminate them. That there is not one left. That there isn’t even a cadaver left. That not a trace is left. That a part of humanity is eliminated. That is what is on trial here. Whether you are Jewish or Christian or nothing . . . or Muslim, you should have respect for what happened, and it is very important that one questions, that one understands, to understand just how one could go all the way toward EXTERMINATION! of a part of humanity.

Blonde: Mr. President, they better understand! [turns toward Yassine and Nadia] I think it was you who said you really enjoyed studying religion, and would like to have a better understanding of the Jewish religion.

Hollande: [Smiles for once] Yes? Nadia: “We learn about Judaism only in relation to its conflicts.”

Nadia: In fact at school we study religion, Christianity . . . me I’m Muslim, and I know my own religion a little, but we only studied Judaism in terms of its conflicts. [cut to Hollande’s eyes shifting to the Blonde hostess in fear]. We did not study it . . . there was Zionism but . . .

Black: I remember studying Christianity and how they think the soul is immortal, but I don’t remember a thing about what the Jews believe. Maybe that is because it is recent. [The inclusion of History of Religion in the curriculum.] When I reread the chapter on Christianity, I remembered it well. I’m not a Christian but I thought it was very interesting.

Hollande: I think it is very important to learn about religion in a secular manner. And what does that mean, secularism?

Hollande: In a manner where we are not trying to convert, but we teach the history of religion. That is what we are trying to introduce into the program. And to introduce it early, so that we can understand how they are born, the religions. And see how . . . they come from the same roots, eh. Jews, Christians, and Muslims come from the same source. Why did they suddenly distinguish themselves? When we understand, when we know, then we are much more tolerant in terms of other religions or even in solidarity around certain historical events. Blonde: Yanis are you OK that religion is being taught at school?

Yanis, another Arab then gives the state’s official view on secularism in his own words. It has since been discovered that Yanis has bragged on Twitter about robbing white people at his local grocery store.

The rest of the televised section proceeded more or less as planned. What was most notable was the difference in body language: the Arab teens were relaxed and collected while Hollande and his hostess with Aryan looks but a rotted-out soul moved like hungry sparrows. Mention the J-word and everybody who doesn’t have to break a sweat to make a living starts to get nervous.

Filming did continue after the shoot when Hollande went to speak with the youth. He started by addressing Nadia saying, “I hope I will have time to convince you.” She patted him on the shoulder and said, you will have two more years. Hollande searched for a response to this prediction of failure in the next election. She twisted the knife saying that he is sliding in the polls. She then told him that France must answer for its genocide in Algeria. Hollande tried to draw a distinction between wars of decolonization and genocide, but to no avail. She asked why France is stirring up wars, which is expensive, while the economic crisis is ongoing and accused him of going to Mali for their natural resources. After Hollande’s labored response she said, “Well, we don’t want to hold you back any longer.”

The fact is, as a young Arab female from the ghetto, the Socialist Party is her greatest advocate and only vehicle for political power in France. There is no alternative. She will most likely stay at home in 2017 when it is time to choose Hollande’s successor. Hollande has done all he could to kiss the asses of non-whites and make them permanent parts of his coalition. Just as an example, he was surrounded by two dozen children when lighting his Christmas tree . . . not a White face among them. However, Arabs will not play a supporting role to the Jewish lobby or enthusiastically rubber stamp the culture war of the gay lobby like the rest of the Socialist Party coalition. They have built their house upon sand.

The business magazine Challenges subtitled their coverage of this, “A Failure of Republicanism.” Across the spectrum, Hollande’s performance has been strongly criticized.

Realizing that Hollande is not up to the task, Najat Vallaud-Belkacem, the Moroccan born Minister of Education, went on iTele the following day stating that, “Dieudonne has done an enormous evil to the youth of France.” She then took her own shot at trying to distinguish Charlie Hebdo and Dieudonne:

“To see to what point this discourse of “double standards” — why we allow liberty of the press and expression for Charlie and not for Dieudonne – this discourse finally shows itself in the spirits of these children, they came to lose all notion of hierarchy of values.” . . . “It’s nice that they can express themselves . . . it’s up to us to respond that racism, anti-Semitism, apology for terrorism, are crimes and not opinions.”

Nice try Najat! I think that the youth of France whether Black, Blanc, or Beur are still not buying it.