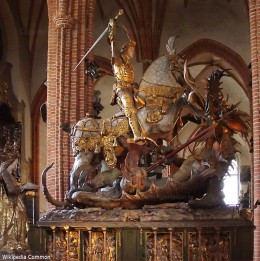 The following text is my opening statement for a debate with Jonas De Geer on Christianity and European revival held in Stockholm, Sweden, on Saturday, April 18, 2015. My subsequent statements were extemporaneous. The debate was recorded, and can be heard on YouTube here [10].

There are two perspectives we can take on this question. One looks back at history. The other looks forward to the future.

Looking back at history, we see that Christianity played an important role in Europe for more than 1700 years. It might have been otherwise. Many wish it were otherwise. It might be different in the future. But even if there comes a day in which Europe is no longer Christian, there will never come a day when Europe has never been Christian. In that sense, Christianity will always be part of European identity. Just as pre-Christian religions and cultures stretching all the way back to the last Ice Age will also always be part of European identity.

Defenders of both Europe and Christianity point to the fact that, in the past, the Church supported the defense of Europe from Islam. But the Church was defending Europe only incidentally. What she was really defending was Christendom, which at the time was centered in Europe, but even then extended into Ethiopia, the Middle East, and as far away as China. And the Church has always been willing to shed European blood to defend and extend Christendom, from the Crusades to liberate the Holy Land on to centuries of global missionary work that continues to this day. Far from being an example of the harmony of Christianity and the ethnic-genetic interests of Europeans, the Crusades are an example of how the Church led Europeans to shed their blood to recoup lost Christian territories in the Middle East.

Let us now look to the future. If present trends are not reversed, European man will cease to exist. I do not fear for the artifacts of European civilization, since Bach and Rembrandt would continue to be prized by Jews and Orientals. I fear for the race that created these glories, and can create new glories. Our race is facing simple biological extinction [11] due to below-replacement fertility, miscegenation, and the loss of our homelands to non-white invaders. If European man is to survive, we must exclude all non-whites from our homelands and adopt policies that cause our birthrates to rise, particularly the birthrates of the genetically best-endowed. In short, we need White Nationalism with pro-natal policies, preferably eugenic ones.

Is Christianity likely to help or to hinder White Nationalists in preventing the biological extinction of our race? To answer this question, we must first look at the actual behavior of the existing churches. All of the mainstream Christian denominations are opposed to White Nationalist policies. Instead, they provide intellectual and institutional support for ongoing white dispossession that is at least on a par with the support of the organized Jewish community, their senior partner in crime. Regardless of the views we may hold about “true” Christian teaching, if the white race is to be saved, we will have to fight the existing churches every step of the way.

Naturally, this battle will be aided if we have sympathizers inside the churches. All too often, White Nationalists who are also Christians spend their time battling against non-Christians in our ranks rather than against anti-whites in their churches. To prove that their White Nationalism is in good faith, they must instead take the battle to the churches. I wish them the best, but I also caution them. Political entryism within the churches will be no easy matter, since the churches were long ago subverted in just this manner, and the existing clergy are Old Masters in that particular black art. They will see you coming.

The battle within the churches will be aided if White Nationalists can find resources from the Bible and the traditions of the Church that support rather than oppose ethnonationalist politics. I have no doubt that such resources exist. Mobilizing them is an important metapolitical project, and it will be credible only if carried out by believers.

However, the battle within the Church is not likely to be successful unless our movement makes progress in the larger social realm, for the simple reason that the Church follows secular opinion rather than leads it. The church has a long history of supple accommodation to secular power, simply because its kingdom is not of this world. Its ultimate goal is the salvation of the soul. Thus, if White Nationalism achieves political power, the churches will hunt for Biblical precedents for our policies and reinterpret, downplay, or ignore contrary tendencies. The Church knows how to render unto Caesar what is Caesar’s. Our job is to become Caesar.

Many defenders of Christianity argue that societies and individuals need religion, and they recommend Christianity simply because of its illustrious past and the fact that it is still here. Of course, this argument is somewhat premature, because the white race first has to survive before we can worry about how we might best organize a future white society.

Furthermore, in the last century, Christianity has been dramatically declining in Europe. Indeed, I have argued in New Right vs. Old Right (here [12] and here [13]) that for three centuries now, liberalism, not Christianity, has been the de facto civil religion of Europe. I see no reason to believe that Christianity will be more significant in the future than it is at present. It may revive; it may continue to decline; it may persist in diminished form; or it may cease to exist altogether.

Thus the mere fact that Christianity is here does not recommend it, if we are choosing a religion based merely on social utility. Indeed, if that is our primary concern, I have argued that we would be better served by trying to reform liberalism in a race-realist, non-individualist direction, since liberalism dominates everything today, even Christianity itself.

European Christianity will have a future only if European man has a future. But the Church is at best indifferent to white survival, and today it is actively working against it. Thus my recommendation to White Nationalists, Christian and non-Christian, is to focus primarily on white survival, which requires that we be more concerned with battling the churches than preserving them. The Christians among us must be White Nationalists among them. They must be our fifth column, doing whatever is possible to weaken the Church’s opposition to us. They need not fear for the Church, which will survive even if whites do not. God will take care of His Church, but whites must take care of ourselves.