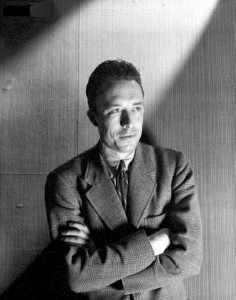 In receiving the distinction with which your free Academy has so generously honored me, my gratitude has been profound, particularly when I consider the extent to which this recompense has surpassed my personal merits. Every man, and for stronger reasons, every artist, wants to be recognized. So do I. But I have not been able to learn of your decision without comparing its repercussions to what I really am. A man almost young, rich only in his doubts and with his work still in progress, accustomed to living in the solitude of work or in the retreats of friendship: how would he not feel a kind of panic at hearing the decree that transports him all of a sudden, alone and reduced to himself, to the center of a glaring light? And with what feelings could he accept this honor at a time when other writers in Europe, among them the very greatest, are condemned to silence, and even at a time when the country of his birth is going through unending misery? (http://www.nobelprize.org/nobel_prizes/literature/laureates/1957/camus-speech.html [2])