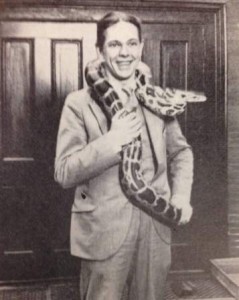 An unlikely linchpin of Postwar America’s Far Right was a slick-haired, grinning ad copywriter and ex-actor with the mad moniker of Tiffany Thayer (1902-1959). Thayer earned a handsome pile as scribe of radio jingles (Pall Mall cigarettes) and “meretricious bestsellers” (Time, May 26, 1956)—quite enough for an apartment on swank Sutton Place and a summer house on not-yet-swank Nantucket—but his most enduring legacy was likely his Fortean Society, which he founded with some other literati in 1931 and kept going as a kind of self-indulgent private hobby until his death.[1]

From their 1931 start as a drinking circle-cum-literary salon, the Forteans gradually mutated under Thayer’s stewardship until the Society was a clearing house for crank theories, flying-saucer reports, revisionist history; not to mention crusades against vivisection, vaccination, water fluoridation, Franklin Roosevelt’s war-mongering deceit, and the imprisonment of Ezra Pound. From 1937 to 1959, articles, cartoons, ranty screeds on such grave matters stuffed the pages of the Fortean Society Magazine (later to be titled Doubt).

The Tiffany of Freethinkers

No “conservative” right-winger, still less crypto-Blackshirt, was Tiffany Thayer. Like many “libertarians” of the present day, Thayer styled himself a freethinker, iconoclast—opposed to orthodoxies of all types, be they religious, scientific, literary or the coagulated received opinions of bien-pensants. It just happened, as it so often does, that Thayer’s brand of freethinking began to annoy some people.

Annoyance became acute in the aftermath of Pearl Harbor. Thayer penned a three-page editorial, “Circus Day Is Over,” denouncing the War as a colossal fraud, a “gigantic hoax” that the Powers That Be had been scheming toward for years. Somewhat less festooned with apodictic daffiness than the typical Thayer product, this essay demanded to be taken seriously, and it was. One founding Society member, newspaper tycoon J. David Stern, was so livid he sent a copy of the magazine to the FBI, demanding that Thayer be investigated for “sedition.” The G-men looked into the matter and decided they had bigger fish to fry.

It was around this time, according to Thayer, that postal inspectors began opening his mail. For a while he took to sending his personal correspondence in plain envelopes with the 420 Lexington Avenue address of the J. Walter Thompson agency, where he wrote his Pall Mall ad copy and radio ditties.[2] Novelist Theodore Dreiser, sometime Communist, was co-founder and also first president of the Society. But Dreiser had a falling-out with Thayer before passing on in 1945. Critic and wit Alexander Woollcott was another early member, but he was scared off by Thayer’s anti-war editorializing. Before dying in 1943, he denounced Thayer, adding unimaginatively that he was as bad as Viereck, who at the moment was going through one or another of his sedition trials.[3]

Playwright/producer Ben Hecht was a founding member but fell out with the Society after 1947, due to Hecht’s ardent, active support for Zionist terrorism. With gangster Mickey Cohen, Hecht funded a gun-running operation for the Irgun, and then took out full-page newspaper ads (“An open letter to the Terrorists of Palestine”) congratulating the Irgun gunmen for killing lots of Brits, and urging them to kill lots more because every time they did, “[T]he Jews of America make a little holiday in their hearts . . .”[4]

Forteans in England demanded that Thayer kick Hecht out of the Society. At first Thayer demurred whimsically: “We can’t do that . . . We are very happy to point out, however that the view Ben Hecht has taken is a very narrow one and highly un-Fortean. He has taken sides in a tribal war between the two principal branches of the Semitic race. That we deplore as discriminatory and exclusionistic. Indeed, some of our best friends are Arabs.” [5] Nevertheless Hecht’s name soon came off the masthead.

Suit has been filed (4-19-43) in Pueblo, Colorado, federal district court, charging that President Roosevelt “resorted to every available device to involve the United States in the European War”.  A “private treaty” is alleged between Roosevelt and Churchill. The defendants named are General Lewis B. Hershey and Major Howard E. Reed. The appellant is George J. Knapp of Pueblo.

The Pueblo Star-Journal comments editorially that the suit “should be quashed without any consideration” . . . . That is to say that the Freeprez advocates abolishing even the little that is left to us of the Constitution. . . .  No doubt the Star-Journal‘s suggested disposal of the suit will have been followed before this is in print.

A Motley Crew of Subversives

Frivolous and scatterbrained as Thayer sometimes appears to have been, his Society and social network offer a fascinating background to the literary and social politics of the era. Moreover they solve a riddle that has long puzzled researchers interested in the doings of Francis Parker Yockey and H. Keith Thompson in the early 1950s. In a number of interviews during the 1980s and 90s, Thompson talked about intellectual soirées that he and Yockey attended in New York City. Whichever version you read or heard—and HKT related slightly different versions of them to Kevin Coogan (Dreamer of the Day), Martin A. Lee (The Beast Reawakens), Keith Stimely (interview transcript published here [2]) and myself—the context of these get-togethers seemed awfully murky, populated by the most outlandishly mismatched guests. Sometimes the meetings were in Harry Benjamin’s office, sometimes they were in G. S. Viereck’s hotel suite on the Upper West Side. Thompson’s descriptions often suggest a cross between a literary cocktail party and a group-sex orgy for “swingers.”

Looking for clarification, the present writer once (1988) telephoned Yockey’s purported girlfriend of the era, Mrs. Virginia Allen, who was present at some of these gatherings. Virginia was shocked and appalled to be reminded of Yockey and Thompson after thirty-five years. She clearly implied that these meetings had been salons for political subversives, and that Yockey and Thompson were mad, bad, and dangerous to know.

Virginia’s near-hysterical reaction—almost certainly colored by encounters with FBI snoops in later years—made the matter seem even more confusing. As these passages from Lee’s The Beast Reawakens suggest, whatever this motley crowd was up to, it probably wasn’t taking over the world:

HOTEL BELLECLAIRE IN OLD AD CUT
In the turret, a subversive salon.

[Thompson] invited Yockey to some lively, late-evening soirées hosted by George Sylvester Viereck at Manhattan’s swanky Hotel Belleclaire. Dubbed “Hitler’s prostitute” because of his role as Nazi Germany’s highest paid publicist in the United States, Viereck was a defendant in a famous wartime sedition trial…

A poet of some repute who sang the praises of “pan-sexuality,” Viereck threw plenty of parties at his large, circular suite at the Belleclaire after he got out of prison. For the most part, these were jocular, high-spirited gatherings that an unusual assortment of intellectuals, artists, Nazi sympathizers, and offbeat lifestyle experimenters. Mingling among the guests one could often find Dr. Alfred Kinsey, the famous sexologist, and Dr. Harry Benjamin, the sex-change-operation pioneer (who counted Christine Jorgensen among his well-publicized clients). Yockey proceeded to have an affair with Benjamin’s attractive receptionist, Virginia Allen, who was also sleeping with her boss. The licentious atmosphere that prevailed at Viereck’s weekly get-togethers, where bisexuality was encouraged, enhanced the sense of living on the edge that many postwar fascists shared.

Viereck took an immediate liking to Yockey when Thompson first brought him over to the Belleclaire. With H. Keith tending bar, discussions broke off into a few small groups. Yockey was a capable conversationalist, and he generally enjoyed talking with Lawrence Dennis and Harry Elmer Barnes, two pro-German “revisionist” historians who frequented Viereck’s suite. [6]

Martin A. Lee here seems to have confused and conflated several different anecdotes from his interviews with HKT. Virginia Allen was Harry Benjamin’s office manager and secretary, not receptionist. Alfred Kinsey knew Harry Benjamin mainly from San Francisco in the 1940s and is unlikely to have been a frequent visitor to Viereck’s turret, as he was mainly domiciled in Bloomington, Indiana. Harry Benjamin was several times a medical pioneer, but never a surgeon of any kind. Christine Jorgensen knew him not because she’d been a patient of his but because Tiffany Thayer introduced them one night in his home on Sutton Place. This was 1953, and the thought was that Harry and Virginia might be able to help Christine with her voluminous, unsolicited, correspondence.

H. K. Thompson, circa 1941
ID for the Sicherheitsdienst

Curiously, H. Keith Thompson never seemed to mention Tiffany Thayer, even though in his interviews he dropped such obscure names as Charles Jackson, author of The Lost Weekend, and former copywriting colleague of Thayer’s at the J. Walter Thompson agency.[7]

It is conceivable, though perhaps unlikely, that HKT and TT never met. By the 1950s Thayer was spending six months out of every year traveling in Europe and writing in Nantucket, where he was composing a projected twenty-one-volume novel to be called Mona Lisa. [8] More pertinently, Thompson and Viereck had known each other since the late 1930s when HKT was in his teens and both of them were active in German-American political circles in New Jersey and New York. Theirs was a long-standing political connection, not a literary one. Unlike many of the people in the Viereck-Barnes-Pound crowd, they were not mere spokes connected by the hyper-manic hub of Tiffany Thayer.

We are delighted to report that John O’Donnell, Washington columnist for the N.Y. Daily News, covered the case of Ezra Pound 11-27-45…with a degree of fairness seldom encountered in the freeprez today.

We are gleefully glad to announce that LMFS [Lifetime Member Fortean Society] Julien Cornell, attorney of the Fortean Society, author of The Conscientious Objector and the Law, has been attorney for Ezra Pound and would have defended him if the poet’s condition had permitted the obscene trial to proceed.

Pound is at present in St. Elizabeth’s Hospital, Washington, where Forteans have visited him. He is translating Chinese poetry while he waits for the world to become sane.

1. After Thayer’s sudden death on Nantucket in 1959, his widow Kathleen attempted to keep the Society and magazine going, but found it too overwhelming and disorganized. (Source: Donald Beaty Bloch papers, NYPL Manuscripts & Archives.) Some Society members later reconstituted it as INFO, or International Fortean Organization, which is as different from Thayer’s version as chalk from cheese.

3. G. S. Viereck clearly performed a great national service by lending his name like that. If you were a hack columnist or Hollywood scripter in the 1940s and you wished to conjure up the acme of traitorous villainy, you merely had to say Viereck! As an eponym it was never in the Quisling class, because it was and is virtually impossible to explain exactly what Viereck was accused of.

8. When the first three volumes of Mona Lisa were published—boxed edition!—Time’s reviewer sneered: “Author Thayer has reached an Everest of vulgarity that may well stand as a mark until standards of literary decency are chucked entirely.”