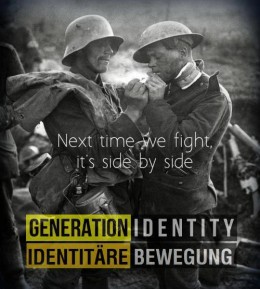 The following answers are to a questionnaire from an academic researcher who is writing a book on the Identitarian movement.

1. Do you see Counter-Currents as an Identitarian publisher?

Yes and no. I describe Counter-Currents as a New Right publisher, yet Identitarianism is related to the New Right as politics is related to metapolitics. I see Identitarianism as an essentially political movement, yet its metapolitical foundations have in part been laid down by the European New Right. I see the project of the New Right — both in Europe and North America — as the creation of a post-totalitarian Right, adapted to combating the post-war cultural hegemony of Leftist ideas. The ultimate aim of the New Right is to establish the biological and cultural survival and flourishing of European peoples as the highest political priority, because these values are being actively eroded by the homogenizing forces of globalization.

Racially, we are threatened with extinction [4] through below-replacement birthrates, miscegenation, and the swamping of our homelands with non-white immigrants and their descendants. Politically, we cannot resist these trends due to the loss of sovereignty to international and global institutions and elites. Culturally, we are being assimilated by a global consumerist monoculture which is hostile to European identity and self-assertion.

But cultural issues are trivial compared to our biological extinction. In any case, the artifacts of European high culture would be appreciated by Asians and Jews, even if the race that created them became extinct. If forced to choose, I would sacrifice the whole patrimony of European civilization to preserve the people that gave birth to it, and can give birth to the next Golden Age.

Even though the groundwork of Identitarianism was laid through decades of deep metapolitical thinking, writing, and teaching, the movement itself is ideologically minimalist, blunt, and plain-spoken. Europe belongs entirely to Europeans. The goal is to make that a reality once more. Non-whites must simply be repatriated. I think that most Identitarians would agree with a statement made by Jared Taylor, to the effect that “We have a right to be who we are, and only we can be who we are,” i.e., only Frenchmen can be French; only whites can be Europeans; there will be no Europe without Europeans; a world without our kind is not something that any healthy person can contemplate with equanimity. Just as guerrilla fighters arm light to maximize mobility, Identitarian ideological minimalism allows them to nimbly step over the cliches of the mainstream’s defenders and stay on the attack.

Counter-Currents, particularly in our webzine, has given a great deal of coverage to Identitarianism in Europe [5] because we wish to encourage an Identitarian movement adapted to North American conditions, in which our population is largely of mixed European ancestry, and our national identities are abstract, propositional, and raceless. In such an environment, we can’t be simply German or English or Italian, and being American or Canadian is racially non-specific. So what we have to fall back on in North America are deeper sources of identity than Old World nationalisms, namely our common racial identity and our common European cultural roots all the way back to the Paleolithic cave painters.

2. Do you think that Identitarianism is revolutionary?

Potentially, yes. Identitarianism is a youth movement. Its rank and file are in their teens and twenties. Its leaders are in their thirties and forties, max. This means that Identitarians are entirely products of multicultural Europe. Of course some have had more exposure than others to multicuturalism. And although they have more or less knowledge of European history, none of them have any experience of, or nostalgia for, Europe just before the plunge. This, I think, makes them constitutionally less inclined to bourgeois conservative compromise and half-measures. That is good, because half a solution is not a solution. This is the key to their revolutionary potential. But it is a conservative form of revolution, because even though they reject today’s fallen Europe, they do so in the name of the rebirth of deeper and more authentic European identities.

3. What do you think of the “clash of civilizations” theory?

I think that Samuel Huntington is basically correct, and my only disagreement with him is that he does not take his analysis far enough.

Huntington’s clash of civilizations thesis is a reply to Francis Fukuyama’s restatement of Alexandre Kojève’s account of Hegel on the end of history. Hegel claimed that history would end when we discover and politically institutionalize the truth that all men are free. Kojève claimed that this required a “universal homogeneous state.” And Fukuyama suggested that the triumph of liberal democratic capitalism after the end of the Cold War might fulfill the Hegelian-Kojèvian framework. Although Fukuyama was also acutely aware that a global bourgeois civilization might be vetoed by people who wish to start history over again, or by Muslims who wish to create a very different universal homogeneous ummah.

Huntington simply offers an account of distinct civilizational blocs. (I would add Jewish civilization to the list.) Even if one takes into account borrowings and influences between civilizations, and blended and liminal cultures, the fact remains that civilizations are plural. And since civilizations have different interests and ideals, tensions and conflicts will always exist. Thus the clash of civilizations. This means that history in the Hegelian sense [6], and politics in Carl Schmitt’s sense [7], are ongoing.

In my view, there are real differences and thus real conflicts not just between civilizational blocs but also within them, and within different nation states. This is why I am an ethnonationalist. When different racial and ethnic groups are forced to coexist within the same political system, diversity gives rise to tensions, which both erode differences and cause differences to become flashpoints for hatred and violence. Thus the ethnonationalist vision — which is also the Identitarian vision — is of a world of homogeneous, sovereign homelands for all peoples.

A universal state would have to be homogeneous to work, which would require the destruction of every unique culture. Identitarians beg to differ. In fact, we will fight to differ. Thus, we veto the end of history.

But the political unification of Huntington’s civilizational blocs would also be a bad thing for the same reason: to create the homogeneity conducive to political functioning, it erodes differences; it erodes identity. Every state, large and small, functions best when it has a homogeneous culture and population. Ethnonationalists think that the best way to achieve such homogeneity is to break states up along existing ethnic lines rather than to blend different peoples into a single mono-race and mono-culture.

Now this does not mean that every tribe in the Amazon or Siberia needs a seat at the United Nations. Nor need it apply to every minority group that does not aspire to nationhood. But even in these cases, the goal should be maximum autonomy under the principle of subsidiarity.

As I argue in my article “Grandiose Nationalism [8],” I think that European nations need to have some sort of loose federation that stops well short of political unification in order to mediate disputes among them and coordinate their policies toward other civilizational blocs. In my view, however, such a federation should encompass both the Western and Orthodox civilizations as described by Huntington.