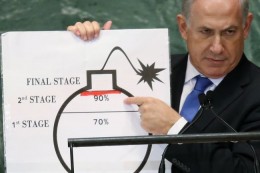 [1]“Everyone has a plan until they get punched in the mouth.” — Mike Tyson

The re-election of Benjamin “Bibi” Netanyahu seems to have taken all of our betters in the media/political classes by complete surprise.[1] Gilad Atzmon describes the setup for “Bibi’s Comeback” thusly:

We were told in the last few weeks that Netanyahu’s Congressional address was the last nail in his coffin. We read reports that suggested that the Israelis reacted negatively to his warmongering initiative. As usual, we were mislead [sic]. The Israelis, as shown by the election results, love Netanyahu and approved his foray into the US Congress. The Israelis love seeing their PM bowed to and cheered on by the American political elite as he persuades them to send their kids to die for Zion.[2]

Atzmon goes on to suggest that “Those who oppose Israel, its Lobby and Jewish Power must be happy about Bibi’s political victory yesterday.” He’s right; at least, this one, your humble correspondent is, and I think the rest of you should be too.

As Greg Johnson has said, the one central principle of the White Republic is that White interests are “privileged.” There can be debate, vigorous, over every other issue: abortion, healthcare, eugenics, etc. But all these must be discussed within the framework of “What’s good for Whites” just as today, all discussion takes place under the guiding principle of “What’s good for the Jews.”[3] This is what the Left calls “hegemony.”

We need to work to make white racial consciousness hegemonic up and down the political spectrum. In a White Nationalist society, we will still be arguing about drug legalization, gay rights, environmentalism, abortion, etc. It is just that the Reds and the Blues will all be Whites, and whites will not have to opportunity to bring in non-whites to gain economic or political advantages in their battles with fellow whites.[4]

The Leftist’s story is that Bibi was sure to lose until he “took a page from the American playbook” and “played the racism card” by flip-flopping on the Two State Solution and then warning about “those Arabs” being bussed in to vote.[5] Voter suppression! What is this, Selma?

Surely the Israelis are Just Like Us (Liberal Jews in America)?

Now, the only thing “American” I saw was Bibi’s attempt to declare victory on election night; apparently, Israeli law forbids doing this until all the votes are cast (rather like the ban on announcing the results of exit polls over here).

Otherwise, Bibi was able to win precisely by exploiting — or, more positively, utilizing — the non-American features of Israeli politics. Namely, a parliamentary system which allows the people to directly express their views, and expect to see them implemented. It’s the kind of democracy every democratic nation has adopted since the British reforms of 1820,[6] but America, thanks to our absurd “revolution,” sat that out.[7]

As a result, we are stuck — since it’s designed not to be changed — with an archaic, 18th-century mechanism of wheels and levers, precisely intended to frustrate the will of the people.[8] Amazingly, “conservatives” like to sedulously evince approval for this “safeguard” that protects our “liberty.” Safeguard? Against what exactly? The people. And whose liberty? The 1%.

Arguably, somewhat workable as long as the people (99 + 1%) were racially homogeneous. But today? It’s the main tool of white dispossession, and the main obstacle to reversing it.

As usual, the Jew deals from two decks. In America, all laws must be trumped by the Sacred Scripture, The Constitution, revealed to the Patriarchs and “interpreted” by a handful of carefully selected black-robed clergymen called “Justices,” is now — what a coincidence![9] — entirely non-WASP and increasingly Judaic.[10] The Dershowitzes, aided by the Kagans if necessary, keep the land free from the dark fascistic night of religion, guns, border controls, segregation, socialized medicine, voter IDs and, in general, any manifestation of white hegemony. In Israel, not so much.

Jeff Halper bemoans the results: Netanyahu’s electoral tactics “have clearly excluded ‘the Arabs’ from the Israeli body-politik.” Then,

This will soon be followed by formal legislation, begun in the last Knesset, declaring Israel to be a Jewish state. When passed, it means that the Supreme Court will be instructed (possible in a country with no constitution) to privilege “Jewish values” and interests over those of equal rights, human rights and international law when they come into conflict. In fact, as the Supreme Court itself ruled last year, there is no “Israeli” people. There is merely a state ruled by Jews extending from the Mediterranean to the Jordan River. In that state, some Palestinians (or “Arabs” as they are called, denying their very status as a people with national rights) may possess formal Israeli citizenship, but are excluded from national life. Other Arabs in that state are denied any fundamental human or civil rights; they are locked up in West Bank cells sealed by a Separation Barrier or inhabit the uninhabitable cage of Gaza.[12]

No wonder the “liberal” Zionists are perturbed. Such a Shanda fur di goyim! This is their Nightmare America, and suppose the goyim take notice and do likewise!

Imagine, “instructing the [Supreme] Court”! It’s the Court’s job to instruct us, finding in The Constitution in all those “penumbras and emanations” like a Talmud scholar teasing out the last absurdity from The Text, revealing the mysteries of abortion and gay marriage.[13]

Well, we should keep this in mind when the time comes to craft the political structure of the White Republic.[14] Until, then, what can we do within these tight limits? Here’s one way we can exploit Bibi’s victory to open things up a bit for our side.

Of course, Bibi, like that other man-crush on the Right, Putin, is really as much if not more part of the problem than part of the solution. Bibi is only able to swan around in the arid desert thanks to the largesse of Israel’s Golem, the USA, where his fellow tribesmen work to ensure that our government serves their interests, here and abroad.

However, for that very reason, the lumpenrecht of Fox viewers is inclined to love Bibi as much as they loathe the equally ethnocentric Putin.[15]

Here is a unique chance for the alt-Right and the official Right to get back in agreement on some common ground for once. Or rather, a chance to trick some of the duller Rightists into taking our — and their — own side.[16]

Rather like a Hitler redivivus discussing the Holocaust and roundly agreeing, “Yes indeed, Never Again . . . must Germany lose,”[17] I foresee one, two, many conversations with dittoheads and o’reilleynauts, starting off with some warm bonding over Bibi’s victory, how it was achieved, and what good it will do his people, and then slowly leading the discussion to . . . why not here?

Perhaps this can be one way to overcome what Charles Hughes Smith has called [3] the “TINA (there is no alternative) mind trap”[18] that seems to paralyze our people.

[1] It seems to have had the same stunned effect on liberals and liberal Zionists in particular, as Nixon’s reelection had on Pauline Kael: “I don’t know anyone who voted for him.”

[3] Issues seeming to involve other groups, such as negroes or Hispanics, are just proxies for Jews; desegregation and mass immigration are tools for diluting white interests, thus preventing the USA from treating Jews as Israelis treat Arabs.

[5] Supposedly Tweeting: “The Arabs are being bussed in to polling booths by Hamas and leftist money. They are voting in droves. You must vote in droves as well – for the Likud. Save Israel!”

[6] Despite American’s typically dopey conceit that of “everyone envies our system of government,” not one nation has ever adopted it. Dropping two nukes on Japan forced them to give up the Emperor, but we still couldn’t force a presidential system on them. As for the subjects of our current “nation building,” it’s prime ministers and national healthcare all the way.

[7] RAF Group Captain Mandrake: Blast! Shot away, I expect by one of your men during this ridiculous fighting! — Dr. Strangelove (Kubrick, 1964)

[8] President Merkin Muffley: And why haven’t you radioed the plans countermanding the go-code?

General “Buck” Turgidson: Well, I’m afraid we’re unable to communicate with any of the aircraft.

General “Buck” Turgidson: As you may recall, sir, one of the provisions of Plan ‘R’ provides that once the go-code is received, the normal SSB Radios in the aircraft are switched into a special coded device which I believe is designated as CRM-114. Now, in order to prevent the enemy from issuing fake or confusing orders, CRM-114 is designed not to receive at all — unless the message is preceded by the correct three-letter recall code group prefix.

President Merkin Muffley: Then do you mean to tell me, General Turgidson, that you will be unable to recall the aircraft?

General “Buck” Turgidson: That’s about the size of it. However, we are plowing through every possible three-letter combination of the code. But since there are 17,000 permutations . . . it’s going to take us about two-and-a-half days to transmit them all.

President Merkin Muffley: How soon did you say our planes will be entering Russian radar cover?

[9] Dr. Alex Zorka (Bela Lugosi): “How fortunate, this will simplify everything!” The Phantom Creeps (1939)

[10] Justice Scalia, a favorite of “conservatives,” is openly philo-Semitic, loves to quote the Torah as “the foundation of our laws,” and would wear a yarmulke if he thought he could get away with it. Conservatives worry about “sharia law being imposed on us” while Scalia gleefully addresses Talmud academies. Since Justice Thomas is his dummy, that makes at least two crypto-Judaics on the court, in addition to the openly Judaic.

[11] Atzmon, loc. cit. He goes on to note that “Meretz, the only so called ‘left’ Jewish party that used to offer a vision of peace, has been reduced to a microscopic role and is primarily committed to LGBT matters.” So at least something is the same over there.

[13] In the immortal words of Brown v. Board of Education [7], “Separate but equal is inherently unequal.”

[14] Nothing is more teeth-grating inducing than the sanctimonious meme, from Star Trek on, of having some future world or future planet slowly crawl from the rubble and wreckage into the light of . . . the Declaration of Independence. As Marx would say, “And the same shit starts all over again.” The nadir of this must have been Keven Costner’s The Postman. Hooray, it’s the mailman! Centralized bureaucracy still exists far in the distance; there’s hope after the apocalypse! For a look at a rare subverting of the meme, see Jef Costello’s “Gangway for a Führer! Proto-Fascist Cinema of the Great Depression,” here [8].

[15] Russia being a traditional object of Judaic hatred, with added input from Polish chauvinists like Zbigniew Brzezinski.

[17] The climactic absurdity of Timur Vermes’ Look Who’s Back, translated by Jamie Bulloch (London: MacLehose Press, 2014): “What happened has happened. Mistakes are not there to be regretted, they exist so that they are not repeated. In the aftermath of a fire I will never be the man who spends weeks and months crying over an old house! I am the man who builds a new house. A better, a stronger, a more beautiful house.”

“And [we] mustn’t ever forget . . .” Fräulein Kromeier said, wagging her finger. . . . We must never let the German people do anything dreadful again!”

“This was the moment when I realized just how much I cherished Fräulein Kromeier. [She] had understood that history is written by the victors. And any positive portrayal of German deeds naturally requires German victories.” See my review here [9].

[18] Typically, “conservatives” like to quote the Iron Lady’s use of the acronym, as some kind of fetish of crackpot realism, rather than realize it is, as Mr. Freeze would say, “the harbinger of your doom” (Batman and Robin, Schumacher, 1997)