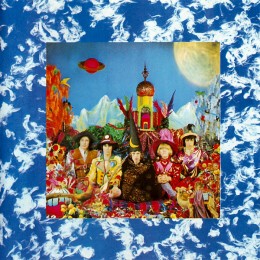 is, to my mind, the most British and therefore the most authentic of all Rolling Stones albums. Their characteristic hard-driving blues is put on the back-burner and suffused through a veil of psychedelia and English whimsy with which the band were seldom associated.

Up until 1967, most British popular music had been in something of a cultural cringe to America. The Stones were no different in this respect than many other British pop musicians, whether it was the “British Elvis” Cliff Richard curling his lip, the Shadows playing “Telstar” (a hit named after a NASA satellite), or even a young John Lennon, squawking like a Black R&B singer on “Twist and Shout [3].”

Before the Glimmer Twins of Jagger and Richards got into their song-writing stride with 1966’s “Aftermath,” the Stones could best be described as an American blues-rock cover band. Metaphorically they sat at the feet of blues, soul, and R&B legends, like Willie Dixon, Solomon Burke, and Chuck Berry. The same could be said for their arch rivals, the Beatles, who paid tribute to a slightly whiter American musical demographic, which also included Carl Perkins and Buddy Holly.

England’s growing subservience to American popular culture during the 20th century, both in music and film, had been tolerable while the British Empire retained it full glory, but following the Empire’s post-WWII collapse and betrayal at Suez in 1956, it became increasingly galling. This meant that anything that could work against this subservience would be guaranteed a warm response. The importance of the Beatles was that they represented the first sign of this.

After the first flush of success, and with the freedom created by becoming mainly a studio band, they moved away from their American musical roots, and developed a more sophisticated pop palette that included classical [4] and Indian musical elements, as well echoes of earlier British musical traditions.

It was this crucible of creativity, presaged on Revolver [5]

(1967), that effectively helped to break the mental shackles of British popular music, and allowed it to overcome its inferiority complex to its blues-and-country-based roots. The album is more like a slab of British Victoriana on psychedelic steroids than anything American.

The remarkable success the album enjoyed suggests that it wasn’t only filling a musical gap, but also a psychic and emotional one; and one that was not entirely removed from the social and political trends of the day. The rich outpouring of musical talented that occurred at this time – The Who, The Kinks, Pink Floyd, the Stones, and others – effectively put America in the shade with music that no longer paid deference to America, at a time when Britain desperately needed a way to retain its self-respect.

Not only did pop success prove Britain’s “modernity” – the crux of much of its inferiority complex – but it also allowed Britons the conceit of seeing their culture as something more potently eclectic, sophisticated, global, and subtly tonal than America’s. This was a cultural backwash of empire, similar to the one the Greeks had unleashed on the Romans more than 2000 years before, although ultimately more trivial and superficial.

With this awakening came the realization that much of the heritage of American popular music owed a debt to British culture: English folk, the Border Ballads, the Christian hymn tradition, and even the call-and-response singing of Hebridean churches that later resurfaced in American gospel music.

The radical wing of this realization was represented by the likes of Van Morrison, an Ulster Scotsman and one of the few convincing White “Black” blues singers, who saw affinities between the blues and the Scottish Border Ballads, and which he expressed in his concept of “Caledonian Soul.”

The tentative switch in cultural power from America to Britain is revealed in the Bob Dylan fly-on-the-wall documentary Don’t Look Back (1965), in which Dylan nervously deals [7] with the challenge presented by Donovan. By 1965 Dylan had “Zeligged” his way into folk-rock superstardom by mimicking and mastering White American country and folk, with a hint of Black blues.

Donovan, while a considerable talent, was not in the first rank, but, as a Scot, his connection to the folk tradition was more organic and authentic than that of the Jew Dylan, even if he had been partly inspired by Dylan’s example. The tension and awkwardness this created was captured in the movie in the scene where the two men trade songs in a hotel bedroom.

The British attempt to both reclaim and expand on a musical tradition that Americans had successfully modernized represented a threat to American cultural hegemony. It is in this context that the Stone’s 1967 album Their Satanic Majesties Request is to be read.

But while Dylan was defending his folk crown against Donovan, in the more mainstream popular genre the battle between Britain and America had already ended, with American bands retreating into styles of music that were increasingly parochial, like the Beach Boys’ California surf music or Creedence Clearwater Revival’s swamp rock.

In Britain, meanwhile the action was now between the North and the South of England, with London geezers the Stones supposedly “squaring off” against the Scouse Beatles. But the idea of a ding-dong “battle of the bands” is a journalistic invention rather than a reality. They were in fact on friendly terms, existing within the same musical milieu, and sharing influences.

Sgt. Pepper’s Lonely Hearts Club Band was released in June 1967. It was greeted with rave reviews and acclaimed as a work of genius. Because it appeared six months later, the Stones’ Their Satanic Majesties Request is usually seen as a direct response to this, and as an attempt to match the Beatles’ “everything but the kitchen sink” musical and production aesthetic.

A more accurate way to see it is as an attempt to widen the breach the Beatles’ album had made in the wall of musical possibility, and to explore the space and musical freedom that the Beatles had opened up with a record that stood aside from earlier American-derived formulas. Both bands were essentially travelling in the same direction, towards a more authentically British modernist popular music. In this respect, it is more accurate to see them as allies on a quest.

The title of the album and its look and feel, epitomized by the video to “2000 Light Years From Home,” even seems to channel something of a Hammer Horror aesthetic.

Hammer Horror, by the way, was the nickname of Hammer Film Productions, a 1960s British movie studio that sought to create a British cinematic template that could compete with America, while benefitting from being distinct – an interesting example of a parallel development in a different medium.

1960s Britain was, of course, firmly ensconced in the Western alliance and the American global power structure, mainly due to the enormous threat posed by Communism and the Warsaw Pact, but there was also a strong undercurrent of rebellion against its ally. The resentment felt against America after Suez by those on the right had now festered into something that even those on the left could access.

This expressed itself in strong anti-Vietnam war sentiment, including notable riots at the US Embassy in Grosvenor Square. But it was also found voice at the highest level in the decision of Harold Wilson’s Labour government not to send troops to die in America’s war in Indo-China.  In 1966 Wilson distanced his government from the American bombing of North Vietnamese cities. The American President Lyndon Johnston was routinely presented in Britain as an unsophisticated cowboy, rather like George Bush would be almost 40 years later.

Their Satanic Majesties Request can be read effectively as a cultural manifestation of Britain breaking ranks with the US.

Much of the album sounds loose and under-produced, which works against the idea that the Stones wanted to use it to compete with the immaculately produced Sergeant Pepper. In rock history circles, the nature of the album is often explained by the troubles that the Stones were going through at the time. Jagger reportedly wrote “2000 Light Years From Home” while in Brixton Prison after being jailed for drug possession. The band had also fallen out with their producer and manager Andrew Loog Oldham, so this was the only album they ever produced themselves.

The looseness is clear on the opening track, the chirpy but dippy “Sing This All Together,” which featured backing vocals by Lennon and McCartney, and the meandering noodling of the reprise “Sing This All Together (See What Happens).” “2000 Man” sounds like three distinct musical ideas that have not been properly integrated, although this gives the song a refreshing feel. The same can be said for “She’s a Rainbow” with low key noodling juxtaposed against a thumping chorus.

Attributing all this to logistical factors, such as management problems, scheduling mix ups, and rushed sessions, however, seems disingenuous. The Stones being the Stones were always going through “troubles” or disruptions of one kind or another. But, rather than reeling from various cock ups and legal problems, the group were in fact embarking on what most critics – both positive and negative alike – agree was their most musically ambitious album. Their Satanic Majesties Request represents an excess of agency – even hubris – rather than a temporary abatement of it.

Unlike the Beatles’ Sgt. Pepper’s there are still clear traces of their older musical influences, but almost always they are “ironicized” and distorted. The subterranean blues grind of “Citadel” for example is filtered through a psychedelic sensibility. “The Lantern” is a country song with brothel piano flourishes that is then stretched and bent out of shape.

In this way the familiar world of American musical genres are warped into weird echoes and odd sounds, giving them the flavour of decontextualized detritus, which are then washed away by the strains of a sitar or an African or Indian polyrhythm. The title of the song “2000 Light Years from Home” says it all – the Stones had left their American origins far behind.

But while Satanic Majesties represents a period of great artistic freedom and rebellion, it was one that other bands, like Pink Floyd, were much better equipped to explore. The Stones were soon pulled back to the plough and a musical furrow that would spiral inwards in ever decreasing circles.

Naturally in America Satanic Majesties was misunderstood and heavily criticized. After initially selling well due to the Stones’ name, sales sharply tapered off.

This prepared the way for their next album Beggars Banquet [8]

, which is notable for the smell of rubber and the screech of brakes that its U-turn trajectory evokes. This was a rapid retreat back to their Americana roots, although it retained some of the irony and sophistication of Majesties, most particularly on the album’s stand out track “Sympathy for the Devil.”