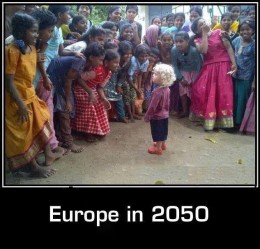 Racial Nationalists all know the dangers of “petty” nationalism. It seems silly for genetically and culturally very similar peoples, like the Scots and the English, to seek political separation [6] while both countries are being colonized by Africans and Asians. It is shameful when whites ally themselves with non-whites to gain advantages over other whites in economic and political rivalries. And it is tragic when these differences lead to bloodshed.

White Nationalism is all about halting our race’s programmed march to extinction, whereas petty nationalism, by stirring up discord and strife, seems merely to be hastening our race to its doom.

But the solution to “petty” nationalism is not what I shall call “grandiose” nationalism, namely, the idea of the political unification of whites — whether of Europe (the “Imperium” of Francis Parker Yockey), or of Europe and Russia (the “Eurosiberia” of Jean Thiriart [7] and Guillaume Faye [8]), or of the whole Northern Hemisphere (the “Borean alliance” or “Septentrion [9]” of Jean Mabire and Volchock). And if political unification is such a great thing, why leave out Australia, New Zealand, and the Southern Cone [10]?


The essential feature of any scheme of political unification is the transfer of sovereignty from the constituent parts to the new whole. If sovereignty remains with individual states, then one does not have political unification. Instead, one has an “alliance” between states, or a “treaty organization” like NATO, or an “intergovernmental organization” like the United Nations, or an economic “customs union” like the European Common Market, or a hybrid customs union and intergovernmental organization like the European Union.

The principal benefits attributed to political unification are (1) preventing whites from fighting one another, and (2) protecting whites from other racial and civilizational power blocs like China, India, and the Muslim world. These are noble and necessary aims, but I think that grandiose nationalism is not the way to attain them.

1. Grandiose Nationalism is Not Necessary

Political unification is not necessary either to prevent whites from fighting one another or to secure whites from external threats. These aims can be attained through alliances and treaties between sovereign states. A European equivalent of NATO, which provides Europe with a common defense and immigration/emigration policy and mediates conflicts between sovereign member states would be sufficient, and it would have the added value of preserving the cultural and subracial distinctness of different European groups.

The threat of non-white blocs should not be exaggerated. France, the UK, or Russia alone are militarily strong enough to prevail against anything that Africa, India, or the Muslim world can throw at us — provided, of course, that whites are again morally strong enough to take their own side in a fight. A simple alliance of European states would be able to deter any Chinese aggression. Thus a defensive alliance between European states would be sufficient to preserve Europe from all outside forces, whether they be armed powers or stateless masses of refugees and immigrants.


As for white fratricide: the best way to defuse white ethnic conflicts is not to combat “petty” nationalism but to take it to its logical conclusion. If different ethnic groups yoked to the same system are growing restive, then they should be allowed to go their own ways. Through moving borders and moving peoples, homogeneous ethnostates can be created, in which each self-conscious people can speak its own language and practice its own customs free from outside interference. Such a process could be mediated by a European treaty organization, which could insure that the process is peaceful, orderly, humane, and as fair as possible to all parties.

2. Grandiose Nationalism would be Counter-Productive

Whenever White Nationalists speak of multiracial societies, we stress that forcing different races to live in the same political system is a recipe for tension, hatred, and conflict. But this truth applies to different European peoples as well. All forms of ethnic diversity within the same political system cause weakness and conflict. Thus political unification would actually heighten rather than ease tensions between European peoples.

Since the fall of the Soviet Empire, the tendency in Europe has been toward ethnonationalism, either by the Czech and Slovak road of peaceful partition or Yugoslav road of war and ethnic cleansing. What is a more realistic path to peace: putting Yugoslavia back together, then Czechoslovakia back together, then unifying them both in a single state, with all the rest of Europe — or allowing peoples with long historical grudges to completely disentangle their affairs and lead their own lives? What is more likely to produce European amity: a shotgun wedding or an equitable divorce?

A unified Europe would have many different peoples and languages in the same political system. But these peoples would not have equal influence on policy. The strongest and most populous nations would dominate. Thus a unified Europe would take on the quality of an empire, in which the most powerful nation would impose its standards and way of life on the rest.

NATO is dominated by the United States. The European Union is dominated by Germany. If NATO were to collapse and Russia were to enter the EU, the result would be pretty much what Hitler envisioned: a German-dominated Europe rendered autarkic and invincible by Russian natural resources. Germans and Germanophiles would rejoice at that outcome, but the French, English, and Russians would beg to differ.

The EU today is well short of real political unification, but it is already a source of tensions and discontent — between individual nations and Brussels, and between North and South Europe, which are finding a single currency and monetary policy to be a bad fit. If the EU tried to impose real political unity on Europe, its members would bolt, and it would face the choice of accepting dissolution or preserving itself through coercion.

If petty states can veto European unification, it will not happen voluntarily. Thus they must be deprived of their veto. Europe will only be politically unified by force, and that inevitably means one nation imposing empire on all the rest. European unity will, in short, be the cause, not the cure, of the next “brothers’ war.”

Some proponents of a politically unified Europe actually admit that their vision is incompatible with European subracial and cultural diversity. Thus Constantin von Hoffmeister and more recently Richard Spencer (both of them married to Russians) have extolled the emergence of a “homogeneous European man.” In Hoffmeister’s words:

The mixing of different European nationalities should therefore be encouraged. We must support sexual unions between Russian women and German men, Spanish men and Swedish women. Only by radically breaking down the artificial barriers dividing Europe can we create the new breed of man . . . [1]

While acquiescing to this sort of deracination and pan-mixia makes sense in European colonial societies, which were settled by Europe’s most rootless and restless, it makes no sense to promote this as a policy for the European motherland, which is populated by those who stayed behind. The New Right is about preserving differences, including the subracial and cultural differences between Europeans. Grandiose nationalism, however, would lead to the destruction of these differences in order to create a smoothly functioning white empire, whether its proponents recognize this outcome or not.

Thus grandiose nationalism is just a racialist, loosely Right-wing version of homogenizing modernity. But ethnonationalists beg to differ. In fact, we insist on it. We will even fight for it. Thus Europe will not be politically unified.

Fortunately, European amity and security can be reconciled with European political and cultural diversity simply through a defensive federation of sovereign European ethnostates — the more such states, and the more they reflect the underlying ethnic diversity of Europe, the better.

Of course, if political unification is really a good thing, then grandiose nationalists should also be pro-NATO as well, since maybe “we” can mount a “take over” there as well. Yet I know of no grandiose nationalists who are pro-NATO, perhaps because such a position would be mocked as transparent shilling for the existing anti-white global hegemon.

But many grandiose nationalists are pro-Russia. In fact, they are for NATO getting out of wherever Russia wants to get into. Again, it is easy to see how this serves the interests of existing anti-white powers, but harder to see how it promotes the long-term survival of the white race.

Petty nationalism energizes but divides people. How, then, should White Nationalists preserve the energy of petty nationalism while mitigating its dangers? The answer is to build upon the pan-European consciousness that already exists in the leadership cadres [11] of “petty” nationalist groups across Europe.